Photo-Amanda Armstrong
From Amanda Armstrong– I was going through some hints on ancestry and found that my 3x great grandfather, Samuel Hawkshaw (If you’ll recall, he’s the husband of Carleton Place’s eldest lady, Martha Hawkshaw)-read–The Grand Old Ladies of Carleton Place
Samuel served in the Fenian Raids! His record states he was part of the 43rd Battalion, which at that time was known as the Carleton Blazers of Bell’s Corners. He was only there for 16 days, and doesn’t seem to be mentioned in any other Carleton Place records for the raids. But it’s still so cool to know he volunteered to fight! 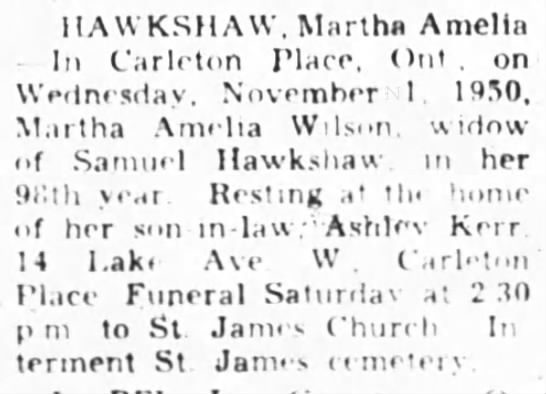 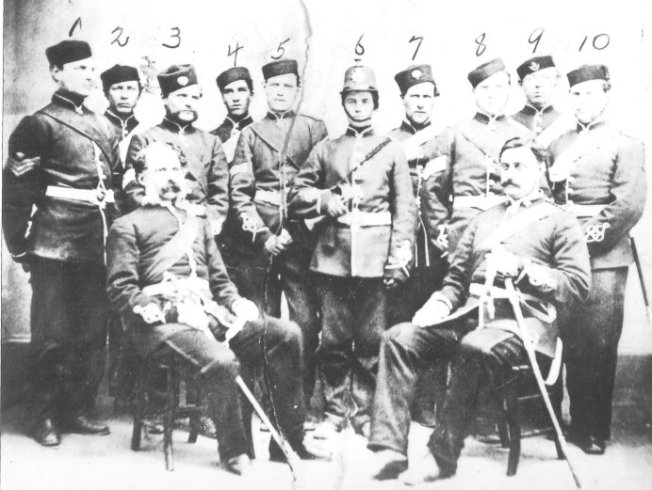 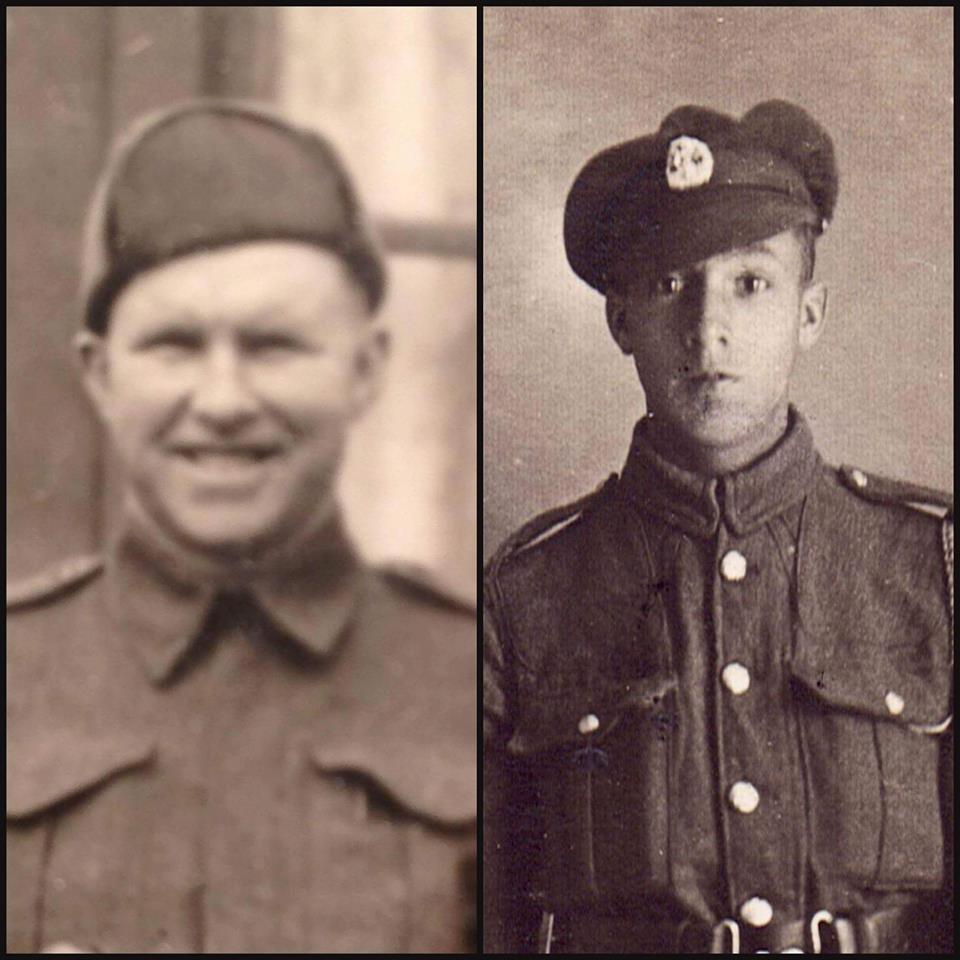 Photo from Amanda Armstrong-From the photo collection of Margaret Martin

Thanks to Leanne Templeton this was found online.. click

Lillie was a schoolteacher from 1928-1932. She was born in Almonte, Lanark County to Walter Augustus (Gus) Toop and Margaret A. Lawford. She attended S. S. #6 Ramsay Township in Lanark County, beginning in 1913. She started her teaching career on Manitoulin Island in 1928 until 1931. She then moved to Wellington County where she was the principal of the two roomed Hillsburgh Public School, and also taught senior students from 1931-1932.

Margaret Martin with “Irene’s Kids”— The original Art’s Variety on Townline Road, then known as Wayside Inn when owned by my Great-Grandparent’s Arthur & Della Toop (owners from 1939-1948). Photo was taken in the early-mid 1940’s. My Grandmother Margaret Martin (nee Toop) standing with friends in the back row on the left.  From-When You Needed “Variety” You Went to Art’s or the Wayside Inn 1940s — Photos 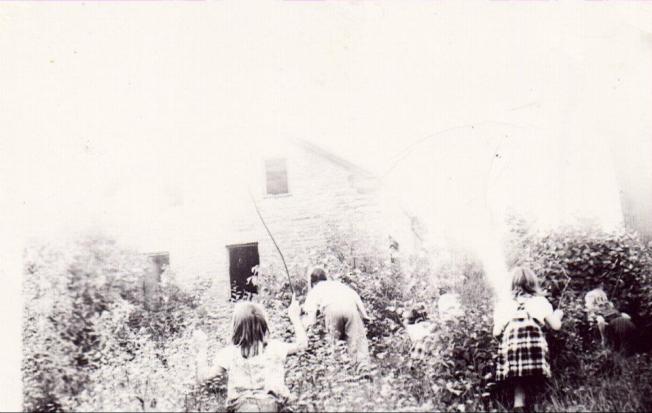 For those who have grown up on William Street in Carleton Place, we all know of the ‘Old Stone House’ at the very end of the road. Here is what it once was, as her Grandmother Margaret & her friends “raided” the house. Even then, this house was empty-and for my Grandmother & her friends, this was a wonderful playhouse. Early-Mid 1940’s–Photo from Amanda Armstrong-From the photo collection of Margaret Martin” From–The Mystery Ruins of Carleton Place- Photos by Adam Dowdall 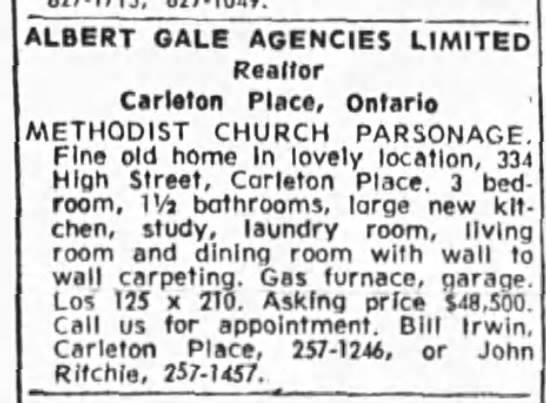 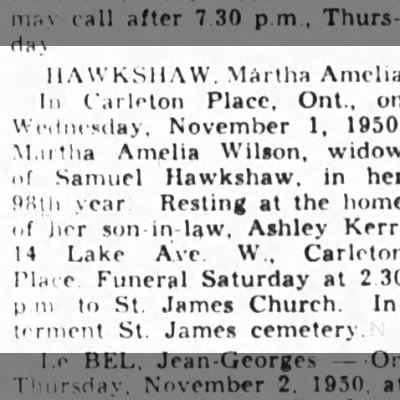 My maternal 3rd Great Grandmother was Martha Amelia Hawkshaw (Wilson). Martha was born on June 3, 1854, in Huntley Township. She was 1 of 11 children of Abraham Wilson and Georgianna Bradley and she married Samuel Hawkshaw in 1873. They had ten children and she died in 1950 here in Carleton Place. Before her death, she was dubbed the “Grand Old Lady of Carleton Place” upon entering her 97th year. She’s buried in the Anglican cemetery on the 8th Line and used to live in 51 Lake Ave West. Her daughter Ida, my 2nd Great Grandmother, also received the “Grand Old Lady of Carleton Place” title.

I’ve also attached the only photo I have of her. The large version of this photo includes her daughter Mary Amelia “Minnie” McGee (Hawkshaw), her grandson Norman McGee, and great granddaughter Alice McGee. The quality isn’t the best with the full version, but I’ve included it anyways.

I’m including the photo of Jane Hawkshaw, or Aunt Bertie as we called her, because I LOVE this photo and I know you will too! Bertie is the daughter referred to in the article on Martha, as the one of whom she was living with on Lake Ave. Mom, while attending Caldwell, would sometimes go over to her house for lunch.

-Photo from Amanda Armstrong-From the photo collection of Margaret Martin”

I’ve included Bertie and Ashley’s wedding announcement, as well as photos of Ashley, Lois, and Albert. Lois use to work as a Bell Operator here in town; Photo included of her and others at work.

-Photo from Amanda Armstrong-From the photo collection of Margaret Martin”

Bonnie Tosh is the daughter of Lois and Albert, and she’s a dear cousin who I’ve gotten a few of these photos from.

Thank you Amanda for all your hard work. If you would like to share family photos email me, Linda, at sav_77@yahoo.com

Remember Art’s on Townline which is NOW MacEwen’s Gas?

This was the place to go and see your neighbours, grab a cup of coffee, weekend groceries and get your lotto. Bill Brunton mentioned:”don’t forget the Beckwith Butcher that was on the right hand side!” This photo is from January 2012–the last photo of Art’s before it was gone. Photo from Amanda Armstrong-From the photo collection of Margaret Martin”

As you know I go “kookoo for coconuts” when I see photos. Photos tell us so much about history, and now that we can document them online we can see them anytime we want and hopefully forever. Thank you Amanda Armstrong for sharing these with us and a big hug to your “Gram”.

If you have photos send them to me sav_77@yahoo.com and I will share history with the world.

Lizzie Brunton just emailed–“I was thinking about old stores in CP today. My first cashier job was at Art’s Variety on Townline. I miss that place, Art was a great boss. That store had everything from fruits, vegetables, deli meat to fireworks lol. 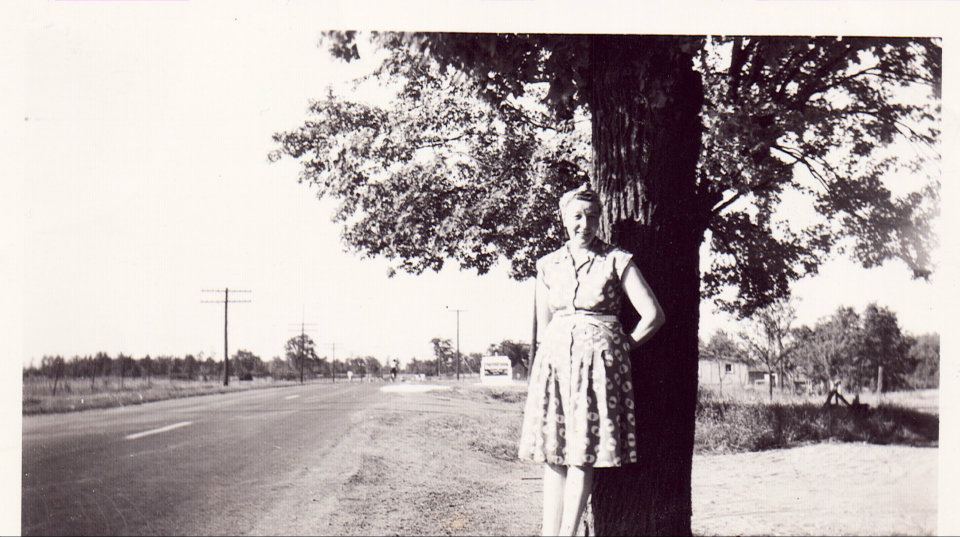 Great view of what William Street use to look like. With a view of Wayside Inn in the back, and a very bare Townline Road. Taken late 1940’s, Della Toop standing in front of the landmark tree at our family’s house. -Photo from Amanda Armstrong-From the photo collection of Margaret Martin”

Kim Martin Elder— And a quick side note…before it became Art’s Variety, it was known as Riverview. That was the name when Livingstones owned it.
Rick Redmond– And even before that it was owned and operated by the Black family in the 1950’s. 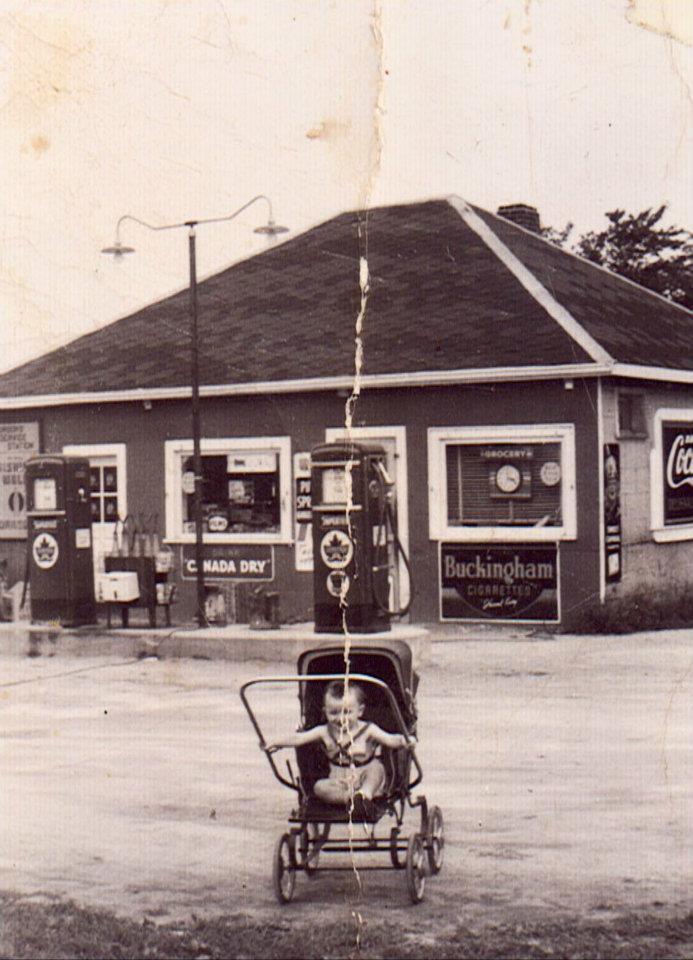 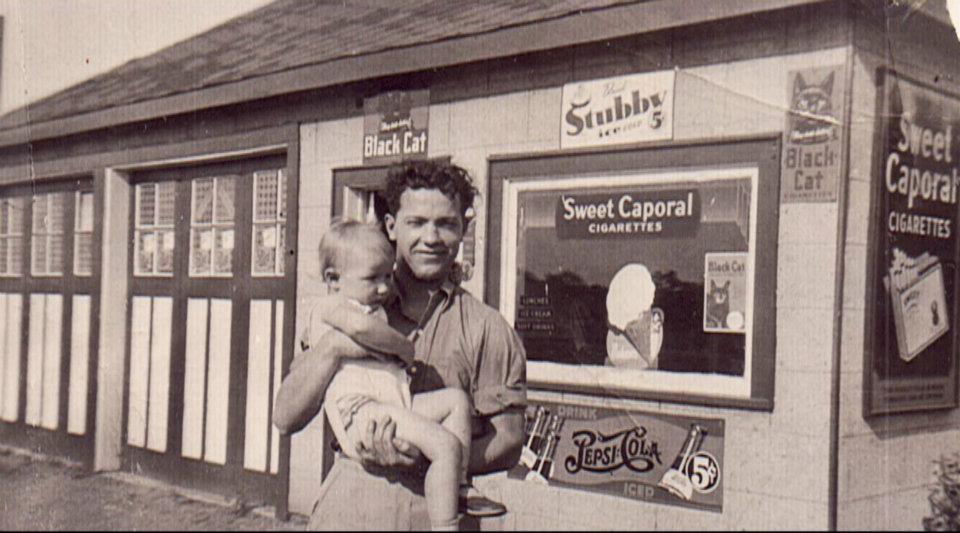 My Great-Grandmother Della Toop in front of the Wayside Inn sign with my Grandmother Margaret on the left, with the view of William Street in the back. Early 1940’s–Photo from Amanda Armstrong-From the photo collection of Margaret Martin” 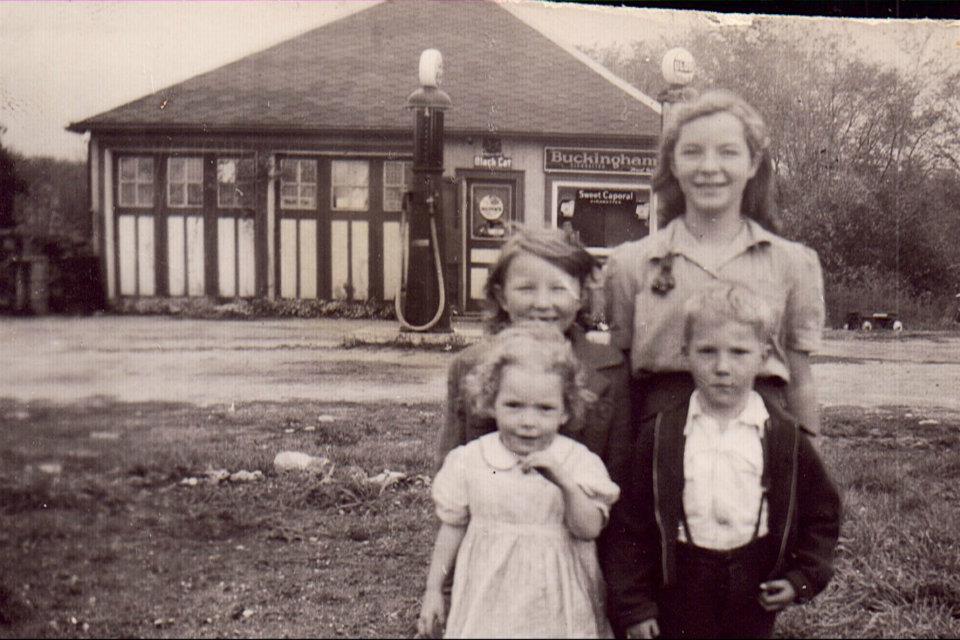 The original Art’s Variety, then known as Wayside Inn when owned by my Great-Grandparent’s Arthur & Della Toop (owners from 1939-1948). Photo was taken in the early-mid 1940’s. My Grandmother Margaret Martin (nee Toop) standing with friends.Standing with her are Valda (Spinks) Blackburn, Orlene (Walters) Hamilton & her brother Barry Walters. Photo from Amanda Armstrong-From the photo collection of Margaret Martin”

Again thank you Amanda and  Margaret Martin for your generosity.

Dan WilliamsI remember it when it was called Black’s

Terry Latham–Think it was Ed. Moss that had it.

Wendy HealeyIt was a great store. Would stop and get gas and a treat on the way home from town. The floors were so worn with so many people going in and out. Bought our meat there.

Wesley ParsonsA lot of local kids worked there as well. Art was a real character!

Jeremy StinsonThere were 2 men named Art that owned it over the years. Art Martel was the second one.

Tina LaRocqueI was one of those kids. I ended up babysitting for him instead cause I wasn’t very good at the store part

Sue Black-Parks ColtonMy grandparents Cliff and Muriel Black owned the store at one point, they had a fresh meat counter, a lunch counter, I think it was in the mid 60’s they had it. My Dad Morley Black would deliver groceries.