The mill was first built as a frame building in 1886 and known as the Shipman Mills. This original plant was burnt in 1909, at which time there was at total loss of machinery and stores. The Wylie Milling Company rebuilt the mill the following year in 1910.. The plant was equipped with up-to-date machinery and was erected in 1910 following the original lines and consisted of a three and a half storey stone building  and basement, with a  storage capacity of 2,000 bushels in the upper part of the building. To this was added a two storey annex used as a feed mill. 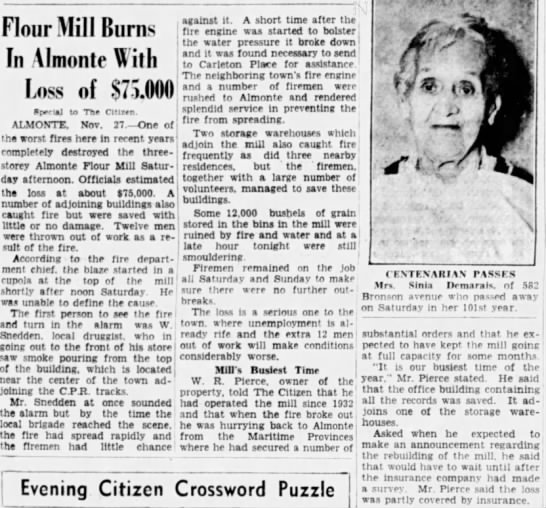 In November of 1938 fire again gutted the mill. The machinery and equipment was a total loss, the stone walls were in good condition, and in 1939 and 1940 the mill was rebuilt by the owner, W. R. Pierce. An up-to-date mill  was installed and the capacity of the mill was increased from a 150 barrel mill to a 400-barrel mill. The products of the mills enjoyed steadily increasing demand from the community as well as the markets farther afield and also a steady export market trade.

Mr. Pierce added an up-to-date two storey feed plant which took care of grinding, mixing, and balanced stock rations machinery. The plant was equipped with large storage bins and capable of turning out uniform, balanced, feeds of the highest quality.

Two, large metal covered storage warehouses were added, with good car loading facilities. The mill had its own valuable water rights in conjunction with the lands owned by it on the banks of the Mississippi river.

The House on Thomas Street — Can You Help?

The Sad Saga of The Almonte Furniture Factory