Photo–Vintage Carleton Place & Beckwith This clipping is from a school scribbler that was kept by Louella Edith Drynan (nee Shail).-

Years ago Mayor Eldon Henderson received this photo (news clipping) from the Victoria Archives in British Columbia that had been in their files for many years. As it was a Carleton Place, Ontario photo the archives felt it should be in our local photo collection.

He was confused at first, but after finding out where the store had been located Mayor Henderson began a contest for the general public. The winning location answer received a free one year subscription to The Review. Do you know where it was in Carleton Place? It was on the corner of High and Bridge Street where Mr. Campbell once had his store. I have sat here examining the buildings to the side and amazed how this building transpired over the years today. Who would have known? How did the photo end up in British Columbia? Keep reading…

Across High Street was a brick building once known as The Sibbett’s Summit Store (Sibbet’s Grocery & Liquor Store–Lloyd Hughes). Later it was ran by Lorne J. Campbell and then D.A. Roe became the owner and it was also Baird’s Food.

Photos below by Shane Wm. Edwards– thank you for all the photos you take so we can put these mysteries together,

All photos- Shane Wm. Edwards after all the bricks were removed. 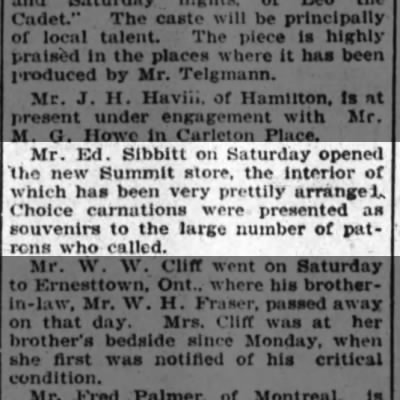 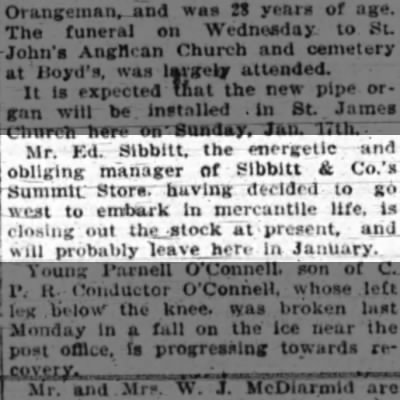 And this is why the above photo from the Victoria Archives in British Columbia that had been in their files for many years ended up there. Edgar Sibbett moved West and that is where his memories ended up.

Doug B. McCarten— This building was across from our house and when I was growing up it belonged to Ellard (sp?)and Beulla (sp?) Gordon who ran her beauty parlour in the front! They raised two boys Dale and Jimmy who married Judy Houston and Robert who was my boyhood friend! They had a TV

📺 before we did and I can remember going over to watch!

👻 and then hid in his Mom’s beauty parlour to see what happened! The police came by and moved it back to the dairy! This was fun so we did it a number of times until the Police

👮arrived at the sign at the same time as my father coming the other way.

My dad stopped and had a discussion with the officer no doubt inquiring if they had seen me…… It was probably 3 or 4 a.m. and seeing my dad with the cop I made the prudent decision to sneak home, get in bed and pretend I had been there the whole time! I snuck in the back door, tiptoed across the kitchen and was just starting my quiet climb when I looked up and there was my mom at top of the stairs waiting for me…… I don’t remember the punishment but they never did find out about our participation in the sign scandal! I remember how funny we thought it was at the time and we laughed so hard my sides ached…… What great fun we had growing up!!

Corry Turner-Perkins– Ellard and Buella were my neighbours on Towline Rd in their later years and they were both beautiful people.I was just a teenager and “Mr.G” as I called him and I would talk for hours over the fence or in the driveway.I still have a small broach he brought me back when him and Buella went to Graceland. Buella would wave me over and send me home with treats or fresh picked rhubarb.! If I recall correctly they were married for 70 years!
Kenneth Jackson yes i remember when Bulah had the salon . it was around this time that i helped to renovate the building into apartments.
Joann Voyce I vaguely remember shopping in there with my mother when we first moved to High St 1948. Who remembers the fire in the second floor of the building right beside Gordon’s? When you look at it now with one story and a flat roof, people must wonder why it looks like it doesn’t fit in with the rest of the street 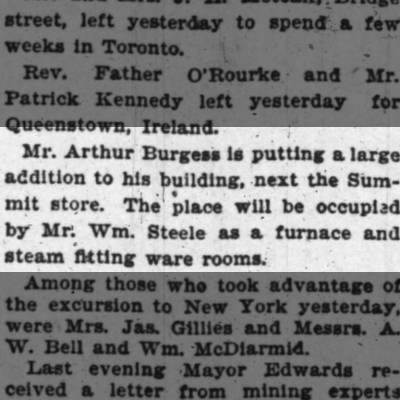 Lewis Sibbett, second son of Alexander Sibbett, Carleton Place, died at Evaleth(?), Minn., on May 12(?) 13(?), aged 28.  The complaint was an abscess of the abdominal cavity.  The body was brought to Carleton Place and interred in the Cram Cemetery, Rev. A.A. Scott of Zion Church, conducted the services.  His wife was a Miss Whitton.

Dale Gordon and his Great Uncle Jack Howard, taken on Bridge Street in front of the store in 1955 or 1956. Dale writes: “My parents moved from Sudbury in Dec of 1947 to help my great Uncle Jack Howard operate the store ,He apparently ran the store with his wife who had passed away . I notice on the building it is called the Howard Block so it may be that he owned the building and someone else ran the store My parents ran the store and my mother opened her hair salon in part of it .My great Uncle passed away in the late 50,s and my mother moved her salon to the small unit just to the north of the store .you can see the entrance door and window in the picture. The store was operated as an antique store by Charlie Rintoul..I remember hanging out in it as a kid .

I think it was around 1960 my parents renovated the building into the 8 unit apartment building . We lived in one of the apartments and my mother ran her salon in the portion at the front .I believe in 1966 my parents sold the building and moved to the town line
Hope all this helps
Dale–Carleton Place and Beckwith Heritage Museum

Lorne J. Campbell owned the business when this ad was printed in 1936. Note the reference to the “Howard Block” as well as the different street address. Building numbers have changed several times over the years