In June 20 of 1939 several people were endangered and three building destroyed when fire broke out in the butcher shop of G. L. Hawkins, on Graham street, at 3 30 o’clock that morning, and for a while threatening the centre part of the village.

The total loss of buildings and contents was estimated as $7,000 Mrs. Albert H. Steen, owner of a double house adjoining the shop; her daughter. Mrss Mary Steen: Mr. and Mrs William McDonald and their daughter. Miss Pearl McDonald, all occupants of the  Steen house, escaped from the burning building with only a few pieces of clothing and furniture. No one was injured.

The origin of the fire is not known, but it is believed to have started in the rear of the butcher shop, spreading to the brick veneer home of Mr. Hawkins and to the frame, clapboarded double house owned by Mrs. Steen both adjoining the shop.

The loss of the store and its contents is about $2,000. the brick house and contents $3,000. and the Steen home $2,000. Insurance partially covers the losses. The fire spreading from the shop, first entered the section of the double house occupied by the J. McDonald family. Awakened by the smoke, they had just enough time to grasp some clothing and  escape from the upper storey.

A  few pieces of the downstairs furniture was removed before the flames made further salvaging impossible. Mrs. Steen and her daughter, Miss Steen who is a graduate of the Ottawa Civic Hospital, also had little time to rescue clothing or furniture. The Pakenham fire brigade was called but, consisting only of a  pump and water tank, was not effective. The Almonte brigade responded to a rail for help, but their arrival was too late to be of any use except to prevent the flames from spreading further. Fire Chief Harry Houston of Almonte was in charge of the brigade, which soon exhausted the water supply in a well, and other supply was too far distant to be of use. 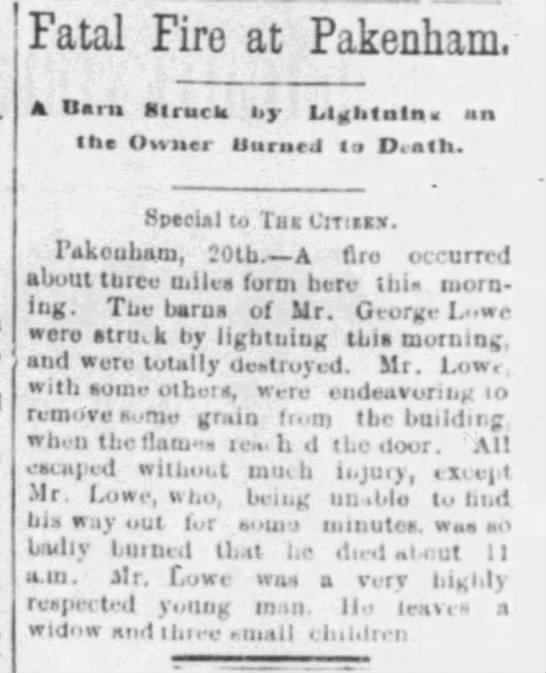