Mrs.P. J. Campbell met with an accident last Monday morning which might easily have ended much more seriously than it did. In fact she had a narrow escape of losing her life. Mrs. Campbell had just gone into the kitchen of her home. early on Monday morning, and was about ‘her household duties’ when suddenly the cooking range exploded with a loud report. Mrs. Campfoell was thrown through the open doorway from t/he kitchen into the -dining-room, and rendered unconscious.

When she recovered consciousness she found herself lying on her back -and just beside her a large piece of the stove. It seems that one of the water pipes from the stove had became frozen, and as the steam developed it could not escape and an explosion occurred. The stove was smashed into small pieces and much damage was done both in the kitchen and in the dining room. The crockery and other articles being broken and one of the pieces of the stove hit the ceiling and damaged it also.

The word is is that Mrs. Campbell was not hit by the flying metal, and although she was badly shaken and bruised she suffered no serious injury. Mr. Campbell was in another part of the house at the time of the explosion.

Miss Welhelmine Reid, daughter of Mr. and Mrs. John R. Reid of Ramsay, won fifith prize at the- ‘Ottawa Winter Fair’ last week for milking. She was first for the county of Lanark. Her prize was $6. The competition was open to girls under 16 years of age. Miss Reid had very poor luck. The cow she drew the ballot for was a young and nervous animal which could not be induced to stand still. This lost her a good deal of time. 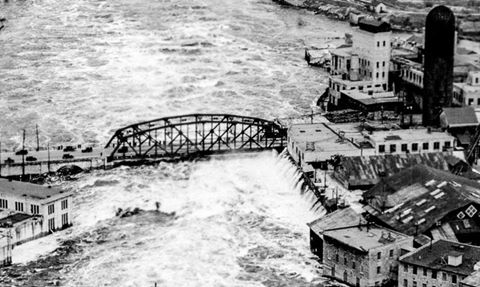 Photo–Lost Ottawa— August 24, 2015 ·Chaudière bridge downstream. Building on left side is Hull 2 hydro station . Close up Number 2 of our earlier pic, showing flood conditions in the Ottawa River in 1926. I zoomed in on this part for two reasons, the first being that you can see people standing on the bridge observing the high water roaring underneath, only a few feet below them. The other is that you can see vehicles pulled over and parked on the Quebec side of the road past the bridge — you can’t do that anymore! 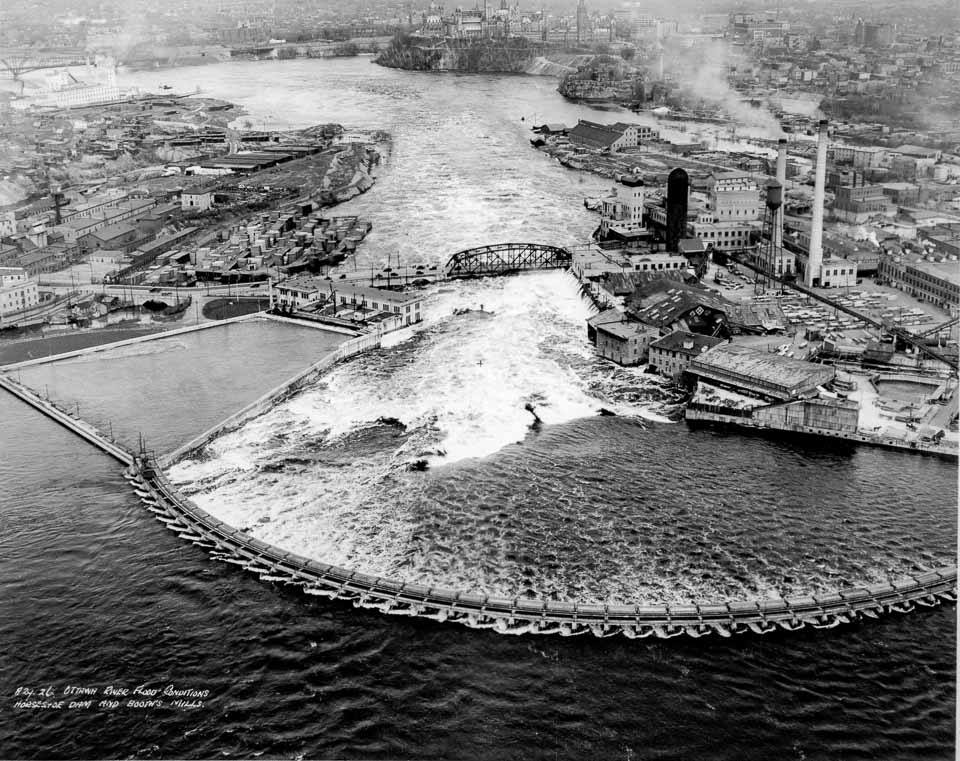 Lost Ottawa August 24, 2015 —Flood conditions in the Ottawa River, August 29, 1926, looking down river past the Ring Dam.The purpose of the dam was to maintain the water level above the dam where things look relatively calm, so you would hardly think there’s a potential flood going on … but the real clue is how close the water is to flooding the Union Bridge. Water this high at Chaudiere would almost automatically mean flooding in Pointe Gatineau. (NAM Unnumbered)
It wasn’t only Perth that was flooded.. it was everywhere.