A correspondent to the Ottawa Journal says : Three of the residents of Ashton,

Messrs. J. Fry, J. T. Basken and A. M.Craig, while fishing on the Mississippi

Lake above Carleton Place, had quite an exciting chase after a bear in the water

opposite Allan’s Point. It appears that on the 11th inst. about 6 a.m. as the

bearship crossing at the above place, and with Basken at the oars, Fry at the rudder and Craig with a Winchester rifle in hand, the boat bounded over the waves until they came within about 150 yards of him.

Then Craig brought his rifle to bear upon bruin and gave him a dose between the shoulder and the head. Bang again twice in the neck, and then the bear gave battle, but two more shots in the head gave him the coup de grace.

After trolling for some time, they towed the animal down the lake to Carleton

Place, and upon telling their adventure they would not be believed, one sport

authenticity of their statement.

night before the adventure. 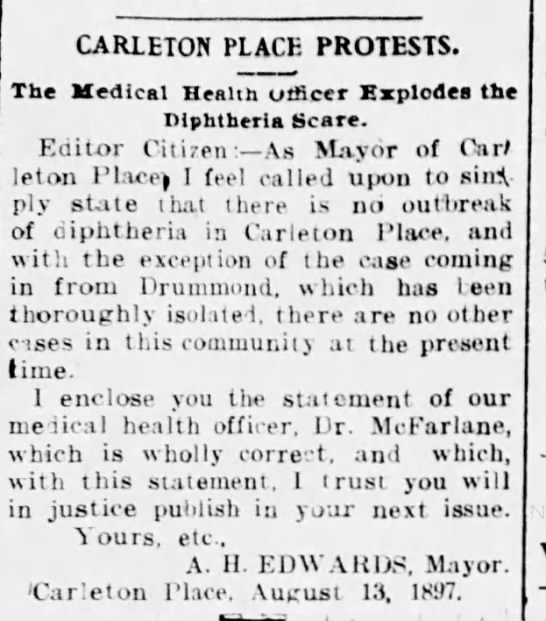 Carleton Place Herald 1897:  Strange as it may appear, the false report that “diphtheria had broken out in Carleton Place” was only corrected when a man named McCaffery of Drummond about 15 miles from Carleton Place, drove into town with a boy named Jones, son of John Jones of Eganville, who said he was suffering from a sore throat.

He was taken to Dr. McFarlane’s office and after examination Dr. McFarlane pronounced the disease diphtheria and advised the man to remove the boy as soon as possible and gave him the necessary medical advice.  The man left muttering something about leaving him in the hands of authorities and virtually abandoned him to the mercies of the doctor and the town of Carleton Place.

The former notified the Board of Health who – naturally feeling indignant abut the matter—took action at once, securing a vacant house on the outskirts of town which was converted into a hospital, secured a trained nurse and now after a week—we are pleased to inform our readers the little patient is doing well.  It is rather unfortunate that the town should be made to shoulder a case of this kind from the outside.

Sulphur Candles for fumigating infected rooms and clothing in times of cholera, diphtheria, typhoid and scarlet fevers and all contagious diseases. The most powerful disinfectant known. Kills all insects. Destroys noxious vapours. When you wish to fumigate with sulphur, use these; no danger of fire, easily lighted, burns steadily. A most convenient article to have. Price 2 for 16 cents.

Come and visit the Lanark County Genealogical Society Facebook page– what’s there? Cool old photos–and lots of things interesting to read. Also check out The Tales of Carleton Place. Tales of Almonte and Arnprior Then and Now

Life in The House of Industry

Smiths Falls & District Historical Society
In 1887 in Smiths Falls, while Capt. Harden of the Salvation Army was conducting a service at the corner of Main and Beckwith streets, he incidentally made some plain statements about drunkenness and drunkards. A man who was drunk in the crowd, hearing remarks along this line, resented same and slipped up and struck Capt. Harden In the face, knocking him down. The captain of the Army would not prosecute the offender, who nevertheless was charged with disorderly conduct and fined $5 and costs, amounting to $10.30.
In 1887 Rideau lodge, No. 241. I.O.O.F., Smiths Falls, had a membership of 62. Today the membership reaches over the 400 mark and within the past 12 years two other branches of this order have been instituted in Smiths Falls-Chimes Rebekah lodge No. 155 and Liberty Encampment No. 67. ‘ Changes of Time.
In 1887 Mr. Wm. Lavender came home from California and brought with him a horned toad.
In 1887 in Smiths Falls, twenty-one firms and businesses were advertisers in the local newspaper, then called the Rideau Record. In the personnel of these firms or businesses there has been an outstanding change during that time. Today, out of that number there is not one of these men connected with a business here today, and an onlooker through these Arms’ names finds that today there Is only one case where the son’s name appears. The following is a list of firms and advertisers.
Former Advertisers. The following ‘ads” are taken from the flics of the Rideau Record of in 1887:
Graham & Foster,” the only noted cheap, cash, ready-made clothing, dry goods and millinery store In Smiths Falls

Geo. Steele, planing mill, custom planing and sawing
A. G. Foster, the Town Tailor, his clothes are unsurpassed in style and quality
Garrett’s Vienna Bakery– headquarters for all tropical  fruits in season and choice confectionery-
Dr. J. S. McCallum, as usual we have a complete stock of every, thing in the drug line, of the flnest and most reliable kind
McKimm and Loucks, have the very nicest stock of boots and shoes ever shown in Smith Falls;
Lindsay and Gilday — new goods and new prices;
Bryson Graham and Co., every department’ crowded with new goods– comparisons invited;
Lockwood and Miner, front street livery;
W. Corbett, large stock of monuments. . head stones, fencing, etc.;
Carss and Corbett building lots for sale;
Jas. Murray– a great drive in groceries

Yesterday I got trapped in 1887 in the newspaper archives.. if  a marching band had entered my home I still would not have heard them. Seriously folks.. some days a 12 step program is needed.. Seen in the Almonte Gazette 1887 and click here and read away.

—An old man named Hutton, living near Oxford Mills, had his feet very badly  frozen during the recent severe weather.

—The Carleton Place citizens have acted promptly and nobly in assisting Mr. George Campbell, who was injured by a falling tree. $115 in cash and a quantity of the necessaries of life have been raised for him.

—A beaver weighing 48 pounds was trapped by Mr. Napoleon Laviolette recently at Gillies Bros’, limits on the Coulonge.

Mr. Wm. Patterson, of Carleton Place, is going into the undertaking business

Fishing for eels through the ice is popular at Brockville just now. One party secured 76 in one day.

Mr. E . Dowlin, of Carleton Place, purchased a car load of beef at Ottawa the other day, which he shipped to that town. M r. Dowlin says the fine Quality of beef can be purchased much cheaper in Ottawa than in Carleton Place

—The car shops at Perth are again in full blast. A large amount of work is on hand, and about 200 men will be employed. Besides repairing, 706 box cars are to be built. They will be turned out a the rate of five a day.

Perth Remembered—Mr. J. T. Henderson came to Perth in 1861, and established the mercantile house which has been eminently prosperous since its inception.

A thick crust has been formed on on the snow in the woods by the recent soft and hard weather. It is very hard on horses engaged in the shanties, and many of them have been completely used up with sore legs. The deep snow has also caused an unusual number of accidents to men by rendering it difficult for them to get out of the way of falling trees.

It looks as if the necessity for soup kitchens has not been delayed until the Liberal party comes into power. In Ottawa, at the present moment, there are hundreds of families almost on the brink of starvation. This is no idle statement, in evidence of which the following remarks, made by the Rev. Father Dowdall, in his sermon at the Basilica there may be quoted : “There are many families in Ottawa at the present time on the brink of destitution who are unable to obtain work. I also know of widowed mothers with families in this city who go to bed at night cold and hungry, and who have no idea how they are going to obtain their breakfasts.” The demands upon the charitable institutions of the city to relieve the sufferings of the unemployed and destitute were never greater.

Last Thursday morning Mr. Thomas Killough, of  Ramsay, came to Carleton Place with a fine team of horses and a load of wood. After delivering the wood to Messrs. Barton & Corbett, he backed his team on the street, just opposite the Herald office, when one of the horses fell down. H e seemed to have ho intention of rising, and after being unhitched, gave one short snort and expired. The animal was ten years old and valued at $125 or $140, quite a heavy loss to its owner. The body was removed shortly afterwards, and a post mortem examination revealed the fact the horse was suffering with disease which was the cause of death.

We learn with regret that the safe of the Peterboro Examiner office was, on Saturday evening, robbed of $40. This fact, should it become widely known, will have a deplorable bearing on the profession throughout the country. People will now think that if one office has money—even $40—-all may have, and consequently editors and printers may be called on to pay up. Then, too, the burglarizing burglar may set out to raid printing offices is all over the land. Publishers having so much as $40 left on hand on Saturday night should take warning and either put the money down cellar under a bundle  or else submerge it in the composition kettle. Just think of it ? $40 on hand Saturday night, and yet they say there is no money in this country.—

It is reported that Mr. Alex. Hunter, of Carleton Place, has been offered $2,500 for the trotting mare Little Vic. As this phenomenal animal is attracting considerable attention of late by her speed, some facts concerning her history may prove interesting. The mare is only about seven years old and was first owned by Mr. Star Merrick, grain dealer of Carleton Place and formerly of Prescott.

A Kingston man before his cow went dry, froze about thirty quarts of milk and packed it away in straw. He has now, consequently, enough on hand to do his family till the cow gives another supply. The idea is a good one, and should be adopted by many.

Smith Falls-M a s q u e r a d e .—The roller skating rink was the scene of a fancy dress carnival on Friday night of last week which proved fairly successful. Several prizes were awarded. The brass band was in attendance and aided very materially  enlivening the proceedings.