Gillies House on corner of Townline and Bridge– where James Poole lived and printed The Canadian Herald. 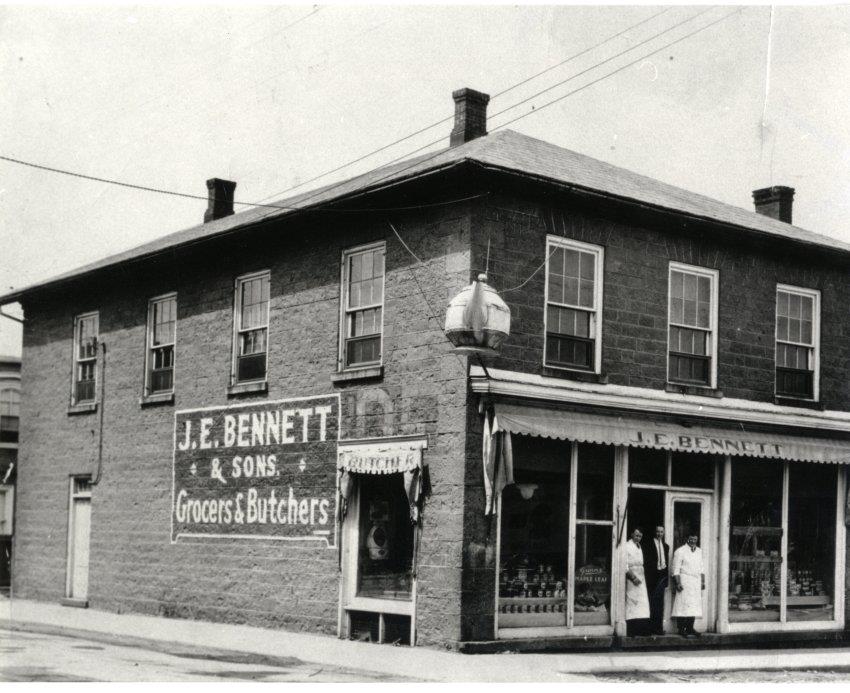 Memorial Park which was supposed to be a farmer’s market in the 1800s but went into litigation.

The Morphy Cram on Emily Street

The Cairn above placed on the property now owned by The Bell Telephone Company, which was the original burying site for the Morphy Family, first settlers of this area. In 1819 Edmond Morphy, his wife Barbara Miller and their eight children, the first residents on the site of Carleton Place, emigrated to Upper Canada from Ireland and settled here.

I thought you might like to see, and perhaps use, the attached file. If you post it as such on your website, you should credit Bill Cookman, Past-President of the Kingston Branch OGS, as its source. Thanks.

I decided to take another look through the scrapbook left to me by Great Aunt Emmaline  (Alexander) McDiarmid. There are all sorts of “stuff” in this scrapbook. Attached, please find 3 pages, two of which is an article from the Carleton Place Canadian and makes reference to a James McDiarmid and family.

Carleton Place and Beckwith Heritage Museum
This 1933 receipt from The Sportsman’s Store is a recent donation. We love their slogan: “The Sport Store of A Sporty Town”! It was owned by Leo “Sport” J. McDiarmid (1884-1967). Leo was the only one of four brothers who fought in the First War and survived. Opening the store after his return to Carleton Place, Leo also was involved in local politics. Together with his mother Mary, he unveiled the Carleton Place Cenotaph in 1924, created to honour the town’s fallen sons.

This image from the family photo album shows Roy c. 1910, with a group of friends after a tennis match. It may have been taken at the McDiarmid family’s private courts on McArthur Avenue-Carleton Place and Beckwith Heritage Museum

In the 1880’s  one of the many Uncle Tom’s Cabin theatre troupe toured through Carleton Place on a regular basis even thought there were constant bad reviews. The first place it played was Newman’s Hall. Here is a tidbit about Newman’s Hall: after the Carleton Place High School moved from Hurd’s Hall; it found it way to Newman’s Hall. There it became the temporary quarters for a High and a Public School class. Newman’s Hall is the building now occupied by the Brewers’ Retail Store on Bridge Street.

New Public Hall opened by Mr. Robert McDiarmid.  One of the best in this part of the country.  Auditorium rearranged to accommodate 500 people.  The stage scenery, painted by Sosman & Landis, Chicago, provides four scenes, the ‘woods’, ‘parlor’, ‘kitchen’, and ‘street’.  The drop curtain presents a view of placid waters, rugged mountain rocks and ancient castle.

Photo of one of Sosman & Landis’s theatre landscapes

Under the personal direction of John F. Stowe, nephew of the celebrated authoress Harriet Beecher Stowe, Uncle Tom’s Cabin will appear in the Town Hall, Carleton Place, September 19, 1896.  Company of 40.  Novel features include the blowing up of the battleship ‘Maine’.

All Tom shows appear to have incorporated elements of melodrama and blackface minstrelsy.These plays varied tremendously in their politics—some faithfully reflected Stowe’s sentimentalized antislavery politics, while others were more moderate, or even pro-slavery.Many of the productions featured demeaning racial caricatures of Black people, while a number of productions also featured songs by Stephen Foster (including “My Old Kentucky Home”, “Old Folks at Home”, and “Massa’s in the Cold Ground”).The best-known Tom Shows were those of George Aiken and H.J. Conway.The many stage variants of Uncle Tom’s Cabin “dominated northern popular culture… for several years” during the 19th century, and the plays were still being performed in the early 20th century.