I found this article in one of the old Amonte Gazette’s of Lucy Poaps and I believe it was from the 1990s.  Brent Eades and Toronto restaurateur Wolf Savcioglu were in the final stages of buying the Almonte Hotel from the then current owner Hap Peattie.

They hoped renovations would begin soon and an architect was drawing up the plans and estimates would be in the 100s of thousands. They wanted to preserve the old hotel such as interior woodworking and exterior clapboard. The hotel dates back to the 1800s but no one is really sure. Researchers figure the hotel which was originally called The David House Hotel was probably built in the 1870s.

A map from 1889 shows the structure with stables and driving sheds behind it on High Street back to the brick house around the corner. Carriages appear to have entered from Bridge Street between the hotel and a two-storey storage house which was connected by a second floor walkway. The storage house is in the same location as the present retail store but it is not known if it is the same building.

Hotels were built along Mill Street to serve the anticipated traffic from the new mills and railway. John Murphy’s hotel at the current site of 34, 36 and 38 Mill Street, later the North American Hotel, was destroyed by fire in 1877. After Shipman’s death in 1852, his daughter Catherine added a three-storey hotel to the north side of her father’s house (95 Mill Street) for a railway hotel known as “Almonte House”.

When Stafford’s Hotel was destroyed in an 1877 fire, it was replaced by three, three-storey brick buildings, which were later also destroyed in a 1909 fire. 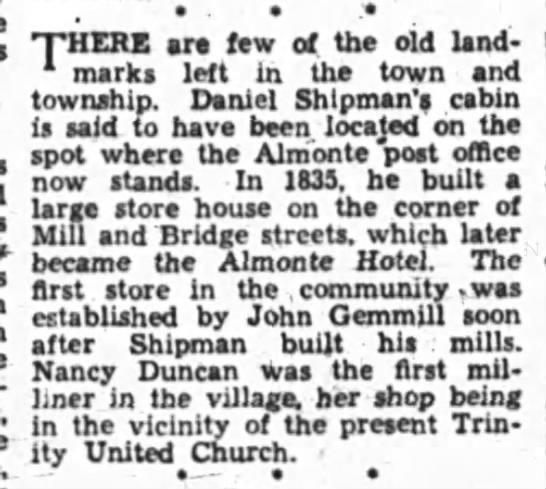 Even the former Shipman house and hotel became a pool hall and tailor shop, with the rear addition converted to the Alma Apartments, managed by Alma Rooney.

The 1889-1902 fire insurance plan for Almonte shows: Rosamond Mill on Coleman Island; a series of woollen mills, knitting mills and foundries along the river side of Mill street; the Post Office and Almonte House Hotel in the triangle of Bridge, Mill and Little Bridge; and the south side of Mill Street lined with wooden and brick storefronts

The Crown regranted the land to Daniel Shipman, who with several other settlers quickly developed the grist and sawmills, and in the next few years a blacksmith’s shop, school, hotel, distillery and other ventures. he first European settler here was a David Shepherd, who in 1819 obtained a Crown grant of land in the area of present-day Almonte, where he began.

Community Memories of the Almonte Hotel

Meeting Your Neighbours — Paul Latour and The Almonte Hotel

The Fight for Senior Housing in 1982 – Almonte History