When the Rosamond mill closed for lack of worsted product  he worked for Almonte’s Red and White Store and then the Moreau Store became Morton’s Variety Store.

There used to be a bench outside his store that used to belong to the dentist office next door.

People used to stop and sit on that bench while he sorted his papers and put them away.

When the local papers came out on Wednesday there used to be as many as 20 people waiting around the store waiting for those papers to come out.

He was once a member of the Lion’s Club and never missed a meeting in 35 years.

He was a member of the Mississippi Valley Textile Museum and a member of St. Paul’s Anglican Church

His staff was Mary Tims who had been with him since 1967 and his brother who worked part time.

Linda MacFarlane Awww I was thinking of her the other day and how when I was short a little money for my mixed candy she would always say “ well bless your pea picking heart “ and would let me go . I never understood the line and always remember it.

When Stan Morton answers the phone in his store on Mill Street in Almonte, he sounds like a young man. “Morton’s Variety,” he says in a strong voice that has practised that same phrase on the same phone for years. But Mr. Morton is not so young anymore. He is 90 and he thinks it’s time to retire. After 33 years and 10 months of business, Morton’s Variety will close its doors for the last time on the last day of October.

For many in the town of Almonte, it is the end of an era. For Mr. Morton, who has been working for 76 years, it is the end of a lifetime’s work. “I’ve never been out of a job,” says the energetic store-owner, smartly dressed in a red tie and shopkeeper’s coat. In 1924, Mr. Morton began work as a bobbin boy at Rosamond Mills in Almonte. He was 14 years old and was paid just $7 a week, or 14 cents an hour. “I worked a 50-hour week to earn my $7,” he remembers, “then I moved to the warping and winding room and I got a raise of about three or four cents an hour.”

During the Second World War, Mr. Morton was promoted again and he spent a busy four years making uniforms for Canadian soldiers. But on Dec. 7, 1951, he was out of a job. Rosamond Mills closed the yarn department in which he worked. “I was out of a job on Friday night, but I started another one on Saturday morning in the parts department of GMC motors,” he recalls.

When the store that is now Morton’s Variety came up for sale in 1966, at an age when most people might be considering retirement, Mr. Morton said to his wife, Marjorie, “we should buy that and then work for ourselves.” Morton’s Variety opened for business on Jan. 1, 1967 and has been open six days a week ever since.

Reading the morning paper is a weekend ritual for many….but GETTING the morning paper is a special social tradition in Almonte, While parked up there this week, the Tale of a Town Storymobile found out how a man named Stan Morton (left) made this small errand something unique and special in the community, and how Baker Bob Graff(right) is carrying it on. Hear Almonte residents share this tale of their town here: https://soundcloud.com/…/tale-of-a-town-the-newspap…/s-tY65u

At first, Mrs. Morton and Mary Tims ran the shop, selling newspapers, cigarettes, sweets, pens, wrapping paper, toys, chocolate and greetings cards, but when Mrs. Morton died 22 years ago, Mrs. Tims, now 80, stayed on. Mrs. Tims, who has always wanted to be a hostess in a restaurant, doesn’t think she’ll be looking for another job. “I’ll take this opportunity to do some more curling and some dancing.”

“It will be sad when Morton’s closes and Stan is gone,” says Heather Douglas, out with her dog Maggie and daughter Jillian, 3, who is smiling happily and stuffing her face with candy just purchased from Mr. Morton. “He is just such a wonderful, warm-hearted part of the community and he’s so great with children.” There are posters in the window of every shop in Almonte reading, “Goodbye Stan, we’ll miss you,” and residents have organized a farewell party for Mr. Morton this evening. But Mr. Morton expects to be around town for some time yet. He lives a few blocks from the shop, but his portrait as a 14-year old bobbin boy is painted on the exterior of one of the shops on Mill Street.

He’s a fixture around town and is active in the Lion’s Club, is a regular at church and is involved with the Mississippi Valley Museum. His son, Robert, has mixed feelings. “On the one hand he’s at that ripe old age where he deserves some time off, but on the other hand he’s such an institution in the town of Almonte that I know that the townsfolk are going to miss him, and he’s going to miss the interchange with the townsfolk,” says Robert, 63, who retired in 1992, eight years before his father.

Mr. Morton doesn’t know what he will do in his retirement, but is looking forward to putting his feet up. “I haven’t any plans to look for work,” he says entirely without irony, “but I don’t plan on being a couch potato. I dare say that somebody will ask me to do some voluntary work.”

In the mid 1930’s the team disbanded as interest waned. In its place the lawn bowling club was formed, a group that still plays to this day. The cricket house was moved to Robert Street to be used as the lawn bowlers club house and it still stands today.

These memories were told by Stan Morton, born in Almonte in 1905. The son of Walter Morton, Rosamond Mill worker. Stan is a legend in this town and served as Almonte’s ambassador for many years. His store on main street was always a hub of activity. It was the place for news, toys, candy, you name it, he had it. “Almonte is a great town, none better.”

Judy Reid Hamre —Stan Morton never forgot who I was, I stopped in the shop every time I was home until he wasn’t there any more. I made a point of taking my children into his shop and introducing them to him and telling them the stories of picking out my school supplies every year. ❤️ 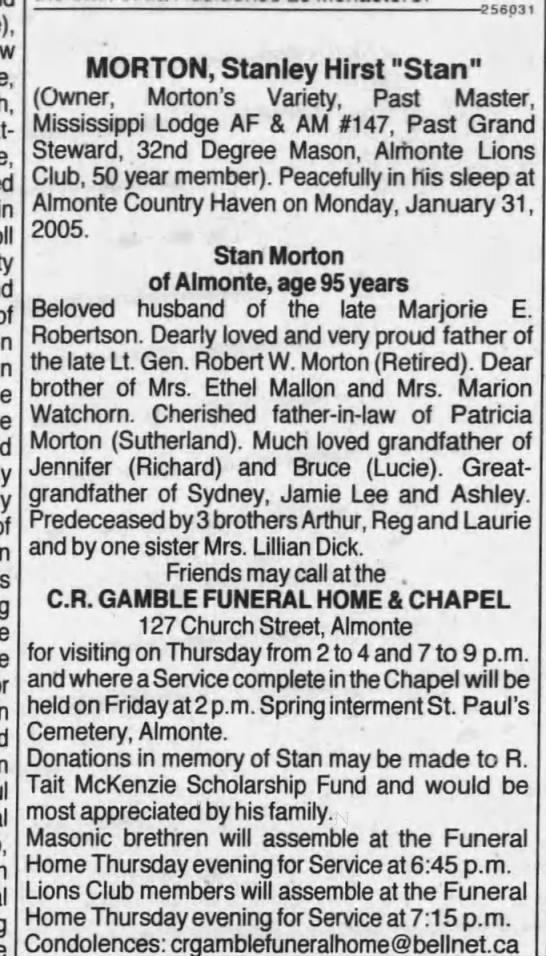