In the 70s according to the Carleton Place Canadian of April 29th 1970 school patrol officers did not last that long. Clyde Emerson finally gave up the job after frustration and Mr. R. Potvin  was sworn in as a special constable.

Emerson was a guardian for the local school children for a long while and was reported as a ‘first class’ one too seeing his job was not an easy one especially during the noon hour traffic.

Time and time again the crossing guard without the aid of lights at the four corners would go to the centre of  the street clad only with a stop sign and bright clothing so the children could cross the busy intersection. All too many times cars ignored the man and attempted to force their way through. Regardless of children or other traffic conditions. local folks said the only person that should be directing that corner was one of the local policemen as they would know enough to respect the uniform.

Winter at the four corners during the school year was especially difficult and Mr. Emmerson frequently remarked to them in a curt tone that it was easier for a driver to wait a few minutes then have the small children stand at the corners in freezing and blustery weather.

In 1970 there were 8 entrances to the corner that drivers had to watch and it was called the strangest intersection in Carleton Place. Not only was there Lake Ave and Bridge Street to consider but also Neil’s Lane with exits from service stations and cars making U-turns at Neil’s Lane.

Local citizens were demanding red and green traffic lights as hopefully drivers would understand these lights if installed. Folks were exasperated to sit as long as five minutes or more to cross the intersection at noon hour, after school until 6 PM and nearly all day for busy shoppers on Fridays and Saturdays. Good wishes were offered to Mr. Emmerson and to the next patrol officer. 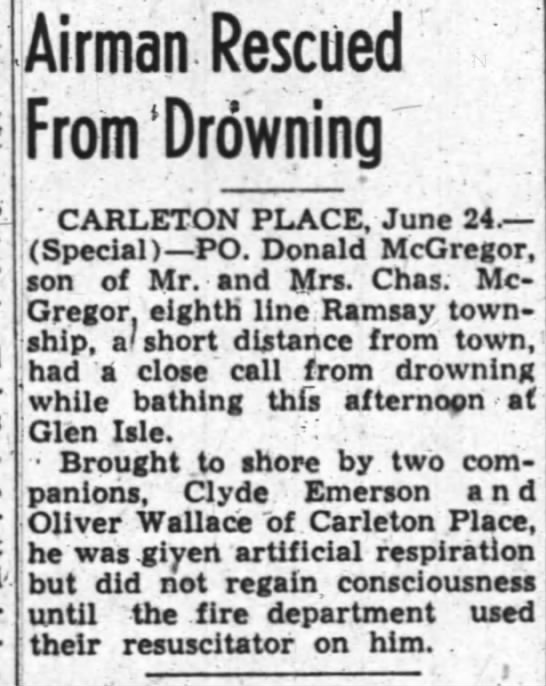 This land was part of the original land grant from the Crown to Edmond Morphy. In
1839 Edmond’s son Edmond owned the land. This lot was divided and passed
through many hands before it became Major Hooper and his wife’s residence in
1920. Hooper’s residence was referred to as the Raloo Cottage.

Major Hooper’s wife before she was married was Mabel McNeely. It remained in the hands of the Hooper Family until 1954 when McColl Frontenac Oils purchased the land. A gas bar and convenience store has been at this location ever since and today it is a Canadian Tire Gas Bar.

Major Hooper became Postmaster in 1920 until his retirement in 1950. During
Hooper’s time if office many changes occurred. He had control of the clerk for the
position of Telegraph operator until the telegraph service moved to its own building.

Peter Iveson-– Aunt Craig, Mrs. James Craig lived at Lake and Bridge across the street, I remember the white house being torn down about 1957 and the garage station built.

Taking it to the Streets—The Crossing Guards of Carleton Place