Hello. My Aunt lived in Almonte until her untimely death of car accident. Wondered if you have any info on her. Elizanne Campbell–Wendy Collens Robinson

Aunt Anne was born in Guelph to a school teacher and a nurse, Arthur and Olive Clarry. They had 3 daughters June, Elizabeth Anne and Doris. They lived in Ottawa and Cobalt for a few years but eventually went back to Guelph. Aunt Anne married Frank Campbell who was in the military. She lived all over the world with my Uncle Frank and their 3 children Brad, Cathy and Donna. After Uncle Frank retired from military, he worked with underdeveloped countries with helping children. Aunt Anne was the official artist of the Vietnam war as she was living there at the time. Her artwork reflected the people she lived amongst. There are several pieces from Africa, Vietnam, and Germany, to name a few. When her marriage ended, she lived in Guelph for a while but eventually moved to Ottawa where she got a job at Ottawa University teaching English as a second language.
The city life was hard on her allergies and she moved to Almonte. Her way of living reflected places and people she had met. She loved Almonte as it was very peaceful. She loved to canoe behind her house, loved nature and enjoyed life. She was working on an art show when she died in car accident. She is survived by 2 daughters, and 6 grandchildren and great grandchildren. Also known to many as Elizanne Campbell new Clarry

Elizanne (Anne Campbell) was my mother-in-law. I went to Ottawa in summer 1972, after completing my first degree. (I am English). My aunt, Kay Peterson,was a close friend of Anne’s and it was through Anne and Frank that I met their son Brad, my late husband. I stayed in Ottawa for 2 years and got to know the family well, although Anne and Frank were in Viet Nam for some of that time. I then returned to England to do a master’s degree and Brad followed me there a couple of years later. He remained in England until his death in 1994.

I remember Anne as a fascinating woman:as elegant and exotic as her art. She was interested not only in art but in philosophy and ideas. My daughter and I still have some of her paintings and drawings. 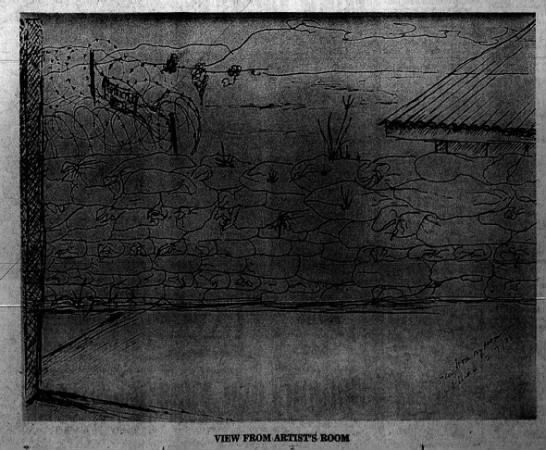 Looking for the Artist of this Carleton Place Painting

The Female Artist from Carleton Place That Never Went Viral