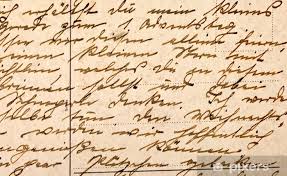 Erin McEwen–here is the direct “translation” of the handwritten notes from 1821. I apologise for the grammar, etc., but this is a true copy:

In June 1821, a party of stalwart young Scotch men and women assembled at the Stedworthy Home in Dornock Scotland to make arrangement for their sailing to Canada – a new country just opening up.

Among the group was a young married couple, William McEwen and his wife who before her marriage was Hannah Stedworthy. This young couple, having all the comforts of life in their own home were advised by their parents not to risk the hardships and trials which lay before them; but with great courage and ambition, they bid adieu to friends home and their country and set sail in June for their new land.

The voyage was long and rough, it taking many months at sea (5 months), and it took days to make the trip on land. They landed in Brockville and made the trip to Perth in a covered wagon drawn by oxen. After getting all information as to the blazed trails, they struck off themselves leaving the rest of their party to go where they desired. They strapped their belongings on their back consisting of an ax, a tea set, a lock and key to lock a shanty when they would build one, a treasured Bible which they always read while resting, soda salt-flour and a griddle to cook the scones.

The way through the bush was a blazed one with many swells and bogs on their pathway but they plodded on for many miles, digging up the soil here and there to examine it. Finally, they came to a creek and spring with a nice rise of trees leading up from it. This soil looked good around the roots of the trees and they decided to build a wigwam there. They intended to build a shanty at once; but they were expecting the stork to visit them soon. They at once set to work and cut poles and covered them with brush. While they were busy at work building their wigwam (which was in an adjacent field to the present McEwen home), they heard the sound of an ax at a distance. The two set out in the direction of the sound to fine one Sandy McLean and his wife making a scow under a basswood tree on the 7th line.

Rejoicing to have found these friends who to had come from Scotland near them, and the women only too glad to be able to help one so young who needed a friend for on that cold November night, a male child was born in the wigwam. The first white male child born in Ramsay Township. They called him William after his father. Soon after, they build a shanty on the hill by cutting down trees and piling them up and burning them.

They tore up the soil around the trees with a drag two poles pointed with wooden teeth dragging the ground, sowed seed by hand which they carried on their backs from Perth, reaped it with a sickle, catching a cluster in one hand and cutting it with the other. Thrashed it will a flail, cleaned it in the wind with a hand sieve and carried it back to Perth on their backs to have it stone into ground flour and then brought back to make scones and bread. They planted hops and trained them to run op poles, picked blossoms off and boiled them and used the boiling water on flour, salt and grated potatoes to make yeast. They used a pumpkin cut in two and scooped out for a basin. They used flambos, a piece of twisted cotton or string layered on a pewter spoon, the spoon filled with tallow. It was then stuck into a crevice in the wigwam (and later the shanty), for a light. They had no matches. They used flint. They would strike the flint on a piece of steel or pocket knife, a park from the flint would light the punk. The rotten core in maple gathered for this purpose.

When the surveyors came from Perth to survey the lines, McLean’s had build their shanty directly on the 7th line so McEwen’s had to build another shanty nearer to the 7th line where three more sons and 1 daughter were born. The father died, leaving the mother and son William on the farm. The others went to Western Ontario

The Saga of a James Street Home— Christina McEwen Muirhead

So Where is that Gnarled Oak in Beckwith?