Lake Tamo emptied itself in 1894. The three mile lake ceased to exist in two hours and the bottom of  the lake became fine farmland. Lake Tamo was about 18 miles north of Buckingham. We say “was” because there is no Lake Tamo now. It might be mentioned there are differences of opinion about the spelling of  Lake Tamo. The name is spelled by the geographers and government map makers, and is called bv most people at Buckingham. But up at Notre Dame de la Saliette (now the City of Buckingham) the people call it Lake Tomas as they say it was named after a man named Tomas or Thomas, who in the pioneer days  who was lost in the woods around its bank and died there.

But leaving the proper spelling aside, the lake had a strange thing happen to it. One day in the midsummer the lake, which was about three miles long and half a mile wide, was going about its business as usual and providing water power for a grist mill, when suddenly the end next the grist mill broke and the water began to pour into Lake St. Amour or Muskrat Lake.

In two hours the lake was drained clean, to the astonishment of the natives. It was the first time such a thing had been heard of.  Today the bottom of Lake Tamo is all farm land, of the richest quality, and a highway crosses it. A stranger crossing the bed of old Lake Tamo would never suspect there had once been a large lake there. The question is what caused Lake Tamo to empty? Are other lakes liable to similarly empty? The Lievre county is largely clay and gravel, making easy travelling and undermining for the underground water that exists everywhere. 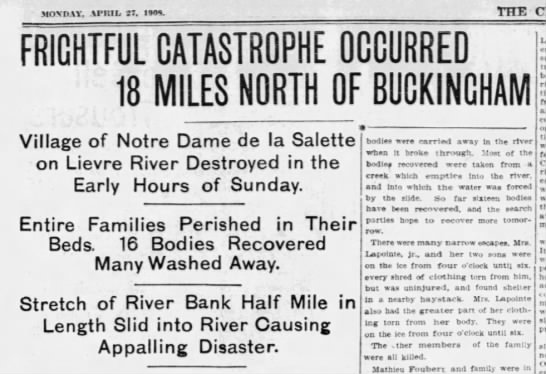 During the early morning hours of April 26, 1908, a deadly landslide killed at least 34 people while sending 15 homes into the Lievre River including the residence of then-mayor Camille Lapointe. As the river was blocked by mud and land, a wave was sent into the village damaging or destroying several other structures. The toll could have been larger as a few years before the event the closure of a mine forced over 200 families to leave the village. Other major landslides were recorded in the village, twice in 1900 and in 1912 where several key infrastructures were demolished and swept away. A major fire also destroyed a large section of the village in 1903.

Leda clay landslide, such as the one that killed 34 people in Notre-Dame-de-la-Salette, is a strange and frightful natural phenomenon. Carleton University professor emeritus Kenneth Torrance, a soil scientist, says he remains in awe of Leda clay landslides after more than 30 years of studying them. “They are utterly astonishing,” he says. “The material essentially turns liquid and the debris the failed material flows away.”

Now You see it, Now You Don’t: The Disappearing and Reappearing of the Tim Horton’s Subterranean

“The Tim Horton’s River” Under my House.. Is That the Way To Fraggle Rock?

Did You Know we had a %^&* Creek in Carleton Place?

Where Was One of the Open Air Rinks in Carleton Place?