Big Joe was a logger and he plied his dangerous trade along the Ottawa Valley as he led the men who conveyed the long trains of logs down the swift rivers to the pulp mills of Montreal and beyond. He was a man of extraordinary strength and courage, attributes matched only by his civility and kindness. During his life he was called upon to teach a lesson to many a quarrelsome braggart or would-be-bully, but unlike the fictitious Paul Bunyan, Big Joe lived and his numerous descendants still reside in Quebec.

In January of 1925 Mr. Derby told a very personal story about Montferrand when he boarded in Aylmer with the Derby family. Mr. Derby Senior and Big Joe were friends and Derby said that the fabled stories of Big Joe Montferrand of being a quarrelsome lad was a myth– except when he was in action.

Joe was generally a good natured man, but when someone started anything he went into action. He instantly became a real wildman and it was said that his kick was deadly. In 1855 however Derby was in Quebec with Montferrand and they were lying off on a raft of wood off Cap Rouge near Quebec. At one point they both decided to get a wee shot of booze and a man asked if he was not indeed Big Joe Montferrand and that he was pleased to meet him.

The man expressed interest in him as the strongest man in the area and said he would like to see if this story was true by fighting him. Big Joe agreed and they both went off to the hotel yard ready to fight. Derby  thought it was best to stay in the bar at this point and have a couple of drinks as really he had no idea they were going to fight.

Before long Joe came in and told the barkeeper he had best come out and take care of what was now a dead man. According to the story the two of them had not been fighting long before the man began to  fight unfairly bunting his head. Joe warned him to fight fairly or he would kick, but the man refused to listen. So Joe did what he did best and that was to kick his opponent, and he kicked hard. One of Joe’s kicks went near the man’s heart and that was the end of the story, and his opponent dropped like a log.

Of course a huge fuss ensued and Joe was not arrested but was detained for a few days until he was able to go back to his logging crew. He had learned a lesson that day and never fought anyone else who challenged him.

Montferrand stood 6’4″ and was lithe and powerful, and one of his biographers, Andre de la Chevrotiere, described him as “prodigiously strong and at the same time generous, charitable, patriotic and with a love for hard work.” Anyway, big Joe was a famous fighting man, and some of his memorable battles took place right here.

He spent a lot of time in Hull and Ottawa between 1825 and 1850. One of his brawls became known in every shanty as “the battle of the beast with seven heads.” Montferrand was a ladies’ man, and he had a date with a fair creature who was coveted also by one of seven MacDonald brothers. The MacDonalds were an unruly lot four of them standing more than six feet, and they knew Joe – would be crossing the Footbridge at the Chaudiere from Hull to the Ottawa side. They decided to confront Joe in the middle of the bridge.

Joe pounded six of them senseless, and came to the youngest, and took mercy, and told him to go home to his mother. Joe continued on his way to keep his rendezvous with the lady fair. ‘ He was a bush foreman, and when the lads were taking off with civilization for the bush, it was Joe’s custom to stand them treats in a tavern, and it was said his generosity usually exceeded his purse.

One time, he was leading his gang into the woods for the winter when they came to The Tavern of the Pretty Widow.  Montferrand wanted to stand the treats but he was broke. He asked The Widow for credit, and she granted his wish, and so Joe decided to leave a calling card. From his “turkey” the bundle the men carried containing all their belongings he got out his “cork boots” (caulked boots), cleared a path, launched himself into the air and planted both feet on the ceiling, leaving his heel marks.

So was born “the legend of the cork boots,” and so many travellers stopped into The Widow’s place to see the marks of the feat that she was well repaid. He had one line of challenge: “No man on the Ottawa can stand up to Jos. Montferrand.” In those days when a “rough and tumble” or “a toute fain” meant using the head, feet, fists and even teeth’, nobody ever did.

Did you know?:- Far more often, though, the appellation ”Mrs.” indicated a widow’s tavern. As the only women to be licensed in their own right were widows. 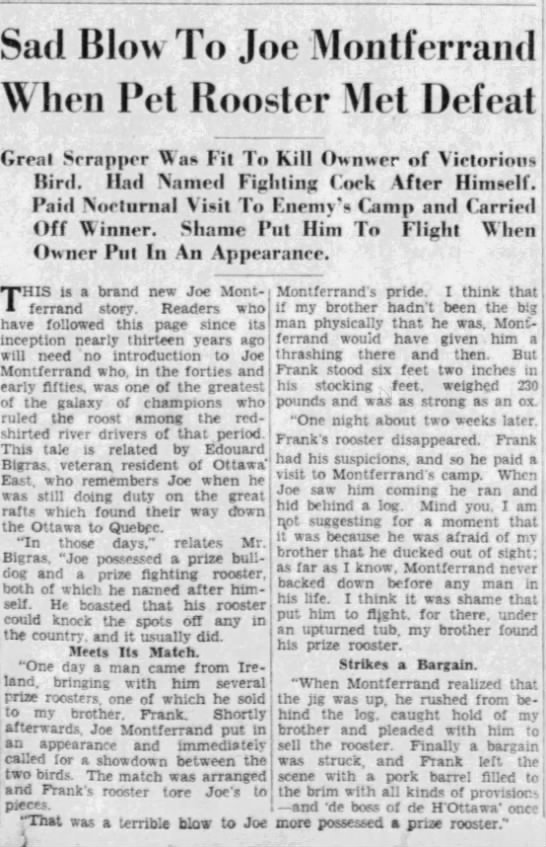 Canada’s Mythical Mufferaw is a real part of Mattawa

All About Lorraine Lemay –Mississippi Hotel