In the 1870’s there was talk of a cave near Brigham’s Creek rapids in Hull, Quebec. It is also said that Brigham’s Creek, also called Brewery Creek, which was originally a narrow inlet from the Ottawa River, (dry during the summer time in certain parts) was also the old Indian portage route for overcoming the rapids of the Chaudière. Similar to the Goonies movie there is an old story of a small gang of boys from Hull who used to scour the land for discovery and adventure. One day while playing on the side of Brigham’s Creek they discovered a cave on the south side of the rapids. The entrance side was about 4 feet high. Not big enough for pirates or a ship, but certainly large enough for a party of Hurons to hide from some surprise-party of Iroquois visitors.

A couple of the boys decided they had to enter this cave but it was too dark, so they visited a family in the neighborhood and borrowed a candle. Two of the more bolder kids ventured in and found the passage of the cave to be about ten feet long. It didn’t take long for the passageway to come to an abrupt end and morph into a five foot square foot room. But that wasn’t the end if you cared to continue the journey– you could head off to another passage that ran off to the left of the room– but if it was me, I would have ended it there– and so did the boys.

The story of the boy’s discovery became gossip, and then folklore, and years later a couple of men found the cave and decided to go further, but never did reach the end of it. One of these men declared that while in the cave he had heard the trip hammer belonging to Walter’s Axe Factory on the Chaudiere Island. Hull is basically built on a swamp/pile of islands. The Brewery Creek does indeed connect to the Ottawa River in two places, but it flows into the Ottawa and not out of it.

So did the cave end on Chaudiere Island somewhere, or did it go further? The end of that cave was never found and the mystery remains unsolved. Upon further research I found a copy of the 1880 edition of Ottawa Field Naturalists Club Volume 1. It talks of Minnow’s Lake which was surrounded by ‘those tinder boxes which constitutes Wright’s Town’ and how both Minnow Lake and the sluggish Brigham Creek created an imperfect communication in the Spring which tapped at the natural cave just behind the storehouse at the old distillery causeway.

So as far the boys were concerned “the cave remained unknown territory” and we wonder if anyone knows the rest of the story.

Update–Rick HendersonA few corrections to the article: 1. Brewery Creek empties right before the mouth of the Gatineau River: its source is upstream from the Chaudière Falls. It essentially is a branch of the Ottawa River, making Old Hull an island. 2. The name Brewery Creek predates the name Brigham Creek. Brigham Creek was used by few people and for a relatively short time. 3. The lower portage (Portage-du-Bas) that was used to get past the falls was located where the Hull Slide was built. Brewery Creek had a set of falls on it and was historically too shallow in the summer to be used as a portage route by anyone. 4. The article mentions the Devil’s hole at the south bank of the mouth of the Lost Channel. It was a relatively small whirlpool that formed there, but the Lost Channel certainly did not “disappear” down the hole. The Buchanan Timber Slide was built in the Lost Channel. The legendary Devil’s Hole that was believed to be “a bottomless hole” was at the foot of the Little Chaudière Falls that were hidden when the Hydro station was built.

Christian Inkster
View of Brewery Creek from 1931, courtesy of https://ssimpkin.carto.com/, photo number A3331_29 (cropped). The creek is in the middle left area of photo, with Rue Montcalm just to the left of it. Tache Boulevard runs left to right in upper area. The modern day brew pub restaurant (Les Brasseurs des Temps) is in bottom left corner (where Montcalm crosses over the creek). 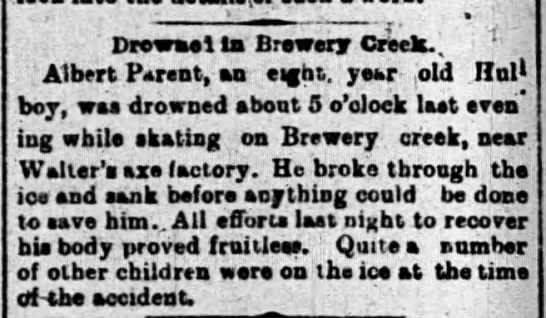 Bridge on Brewery Creek in Hull 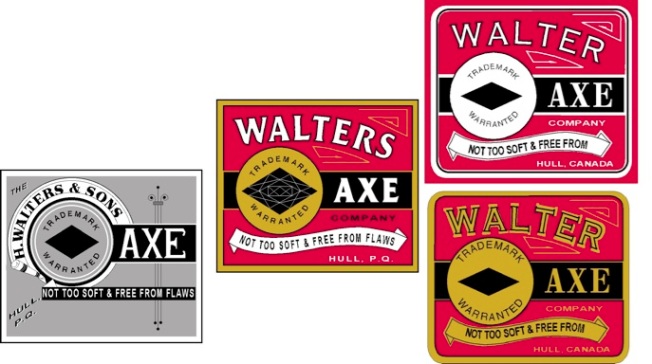 What was to eventually became the Walters Axe Company actually started as H. Walters & Sons in 1889, although Henry T. Walters had purchased the company in 1886. Henry Walters had been the foreman of S. J. Tongue & Co. of Ottawa, Quebec,  in 1864. Two years later he was reportedly working as an axe maker in the factory of Sexton Washburn in Hull, Quebec. The family history indicated that Henry had actually purchased that company himself in 1886 but the company name wasn’t changed until 1889. It was then that it became H. Walters & Sons.
Initially, the Walters sons involved were Henry, Jr., David and James. It wasn’t until sometime after another son, Morley,  graduated from McGill University in 1897 that he also became associated with the company. Morley had received a degree in engineering and by the time Henry, Sr. passed away in 1901, Morley was quite active in the business, rising to the presidency by 1912.
The company name was changed to the Walters Axe Co., Ltd., right around the time Morley took over in 1912. It was about then that Morley purchased the company and became president, a position he held until he too passed away. That was in 1969 when he was 101 years old. He had been the company president for 57 years.
All during that time the plant in Hull continued in operation. The company also maintained a manufacturing facility an warehouse in Ogdensburg, New York quite probably to accommodate the business activities that they were  engaged in within the United States. After Morley’s death, the company was sold. By 1973 axes were no longer in significant demand to continue the operation and the new company closed its doors. Yesteryear’s Tools 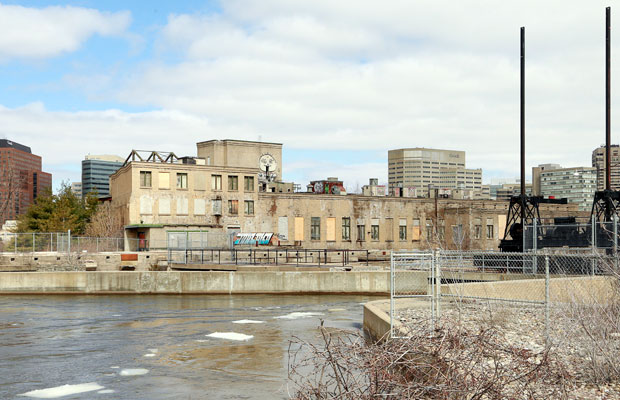 THE CAVE AT POOLEY’S BRIDGE STORY

THE ATTORNEY-GENERAL FOR QUEBEC (INTERVENANT)