I don’t know what is up sometimes in Carleton Place. We protested strippers for a week at the Mississippi Hotel and then we protested Ed Fleming opening up the first funeral parlour on Lake Ave West. I had no idea we protested the opening up of  Lanark Interval House too.

“The neighbors of the prospective tenants want no part of the project. Many fear that violence could erupt at any time between those in residence and those from whom they are trying to escape. Some residents also said that the real estate value of their property would take a drop when prospective buyers found out that “this kind of an institution is in their midst.” Right in the middle of the controversy is Councillor Trudi Dickie. Not only is she an elected representative of the people of the area, she lives a couple of doors from the house in question. “Frankly, if it meets all the requirements, and I understand one issue was the lack of a fire escape which is now being planned, there is little I can do to prevent it’s locating on Mary Street.” I sympathize with the organizers of the house, but I also can understand the residents of the area who are concerned about the unknown. However, I feel the place should be given a chance to prove itself. If it doesn’t measure up at the end of a year, I will be screaming right along with the rest of them,” she said. 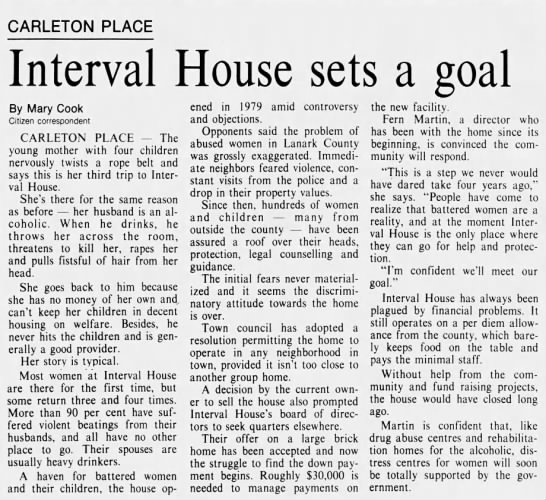 Written in 2013 and published in theHumm