Susan Elliott Topping My Grandfather worked there in the evenings after his job at the Gazette office.

Judy Reid Hamre Our high school “Philosophy Club” ran afternoon meetings out of there in our graduating years. The philosophy?
“Can’t dance, might as well drink beer”
Or something like that.

Patti Larose The woodshed lounge. Lol. …where ladies needed an escort and could only sit on one side of the hotel (bar)–the staff. ,Alli,Niper,and Lizard and Marty

Linda Nilson-Rogers At one time there was a sign saying ladies and escorts over the door. Mixed drinks could be had there. The poolroom area was licensed only for beer.

Dawn Jones Linda Nilson-Rogers if I remember correctly we were all there one night with Keith, Donnie and Cindy and Randy(my husband) and myself. I think I was only ever in there less than a handful of times. I did have the occasion of calling the hotel though..searching for an uncle or two who was late home.

Margaret McNeely–Well here’s my story…..worked there as a waitress in the dining room when i was 15…ppl that ate there were usually only overnighters and passing thru. I remember an American family of five left me a $5 tip…boy thought I had struck gold!

Karen Hirst Story goes that first night in town for Kerry family, year 1954, we had our supper in the dining lounge of the Almonte Hotel.

Rosalyn Wing At one time Mr. Whitten owned it and One side was men only.

Don Raycroft Magically, the beer was always the optimal temperature for drinking !!

Don Raycroft No matter how long it was between visits Ali always knew what you drank !!

Mary Anne Harrison One night we left The Almonte and headed for CP to The Queens. A cousin of mine, who shall remain nameless, pumped about 20 bucks into the jukebox before we left. Moon River would have serenaded the customers the rest of that night and most of the next day before the money ran out. We laughed ourselves silly over that.

Susan Elliott Topping Only hotel I ever got kicked out of-(underage) LOL.

Don Raycroft Susan Elliott Topping I guess we are now wondering how many you got kicked out of once you became of age !!😊

Steven Currie If Ali saw u pulling up outside, he would have a cold pint waiting for u before u got through the door, great fellow

Don Raycroft Steven Currie There is nothing that says “home” more than that.

D Christopher Vaughan Sandra Houston Scott Davey and I each bought a case of chuckwagons from the guy who stocked the freezer one Friday afternoon.

Don Raycroft Linda Mills the chuckwagons were probably the most unhealthiest thing on the planet. But they were sooo good. I must try and recreate them for my grandsons. I’ll just tell my daughters it’s a history lesson !! 😊

It was announced on Thursday of last week that Mr. Fred Hayward, one of the partners at Hotel Almonte had sold his interest in the business to Mr. F. J. Nagle of Toronto, his associate since the property was sold by Mr. A. H. Whitten in 1955. It was a case where both partners felt that one man ownership would be more efficient. After negotiations over a period of time during which both offered to buy the other out, Mr. Hayward agreed to take Mr. Nagle’s bid and after July 1st he will be the sole owner of the hotel.

He is a native of Toronto and has been a partner since 1955. For 25 years he was in the service of O’Keefe’s Brewing Co. Ltd. For a long time he was one of the sales representatives of that concern travelling in Western Ontario and other parts of the province. “Fred” as he is known to his close friends is a family man, his wife and seven children residing in Toronto. During his time as a partner in the local business the interior of the hotel was greatly improved, the men’s beverage room was brought up to date with new flooring, soundproof ceiling and many other new appointments that were long overdue. Mr. Hayward has a nice personality and made many friends during his five years as a citizen of the town. His partner, Mr. Nagle, who has come here periodically over the last five years has an upholstering plant in Toronto. It is probable that he will appoint a manager to operate the business here as he cannot be absent from.

Susan Elliott Topping You can buy them at Giant Tiger! (In SF’s anyway)

Christine Mitchell So, I remember when I was very young, maybe 9 or 10, my dad was staying in a room upstairs temporarily. This would have been mid eighties. He came and went out the back fire escape. Somehow, the bolts holding the fire escape to the building came loose, and the stairs fell when my dad was on them. He jumped hoping to get less hurt, ended up breaking his foot very badly. Was in the hospital for a while, in a cast for an even longer while. He walked with a limp after that until he passed. Ali Dixon would know about this.

Brenda Voyce Christine Mitchell I remember that.. the old fire escape ladder I bet had not been checked for years.

Christine Mitchell There were many Friday and Saturday nights myself or my brother would call there looking for dad to see when to get supper started, or to ask him for money. Lol. Then we’d show up, stick our heads around the doorway and wait for someone to call Mitch so we could get our $10 or whatever it was we asked for. It always seemed that everyone there knew everyone and it was always a big party.

Shelagh Kelly-LaFloor Is the building still around and where is it?

Linda Nilson-Rogers Shelagh Kelly-LaFloor it is now the home of Rebound..reunited across from Circle K 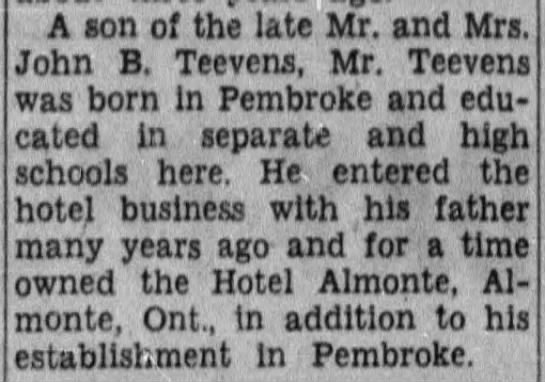