Years ago I exchanged a vintage 1960s Sunbeam Mixer with a friend for a DNA kit. Ancestry.com wasn’t into introducing you to unknown family in those days and with 17 spits into a tube I found out things I already knew. I was 50 percent of Irish descent, 40% British descent and 10% Viking. Viking? Really? Then why am a worrier and not a warrior?

Years have gone by now and I long some days to get one of the new fancy DNA kits that produce long lost family. But, my question is: do I really want to know? Because of death and fires I only own about twelve photos from my past. I spend most of my days writing history about other folks’ families, yet I seem to be afraid to delve into my past. I know a few things about my Dad’s side (Knight) but little about my mother’s family (Crittenden).

Tonight I was writing about Quebec history and said to myself, “what the heck”. I began by going into the newspaper archives googling the Crittenden name. I knew my Great Grandfather’s name was Arthur Crittenden and he lived in West Brome,  Quebec. I remembered stories of round barns and horses and I think I was there once and went swimming at Calls Mills.  I remember singing Seven Little Girls Sitting in the Back Seat by Paul Evans on the way there. Amazon says it was released in 1959, so that would have made me 8.

Calls Mills Quebec. I remember being a lot deeper and running faster.

After researching the archives I found out that the farm my great grandfather had was called Wayside Farm. He had married Eliza Jane Dixon and she offered summer boarding in West Brome for many years. The farm was advertised in The Gazette in 1923 and Eliza listed it near a river with good bathing and fishing. You could also have use of the piano and phonograph if you wished and there were free auto drives.  Did I mention they had their own dance pavilion? Shirley McCloud remembers- I remember going to a Uncle Arthur’s ( Crittenden) place in Brome– I was only a little girl and he use to have barn dances and people came from all over the area.

My Grandfather George Crittenden always wanted to leave the farm and married Gladys Ethelyn Griffin from Laconia, Belknap Co., New Hampshire on September 25, 1917  in Verdun, Quebec. He liked to think himself as an International Man as he worked for the CNR in Montreal. Well that is what my Mother used to say: an International Man who was a staunch Methodist. Unfortunately, no one in my family seems to live long and my Grandmother Gladys died April 13, 1935 in West Brome, Quebec when their only child and my mother Bernice Ethelyn Crittenden was 8. 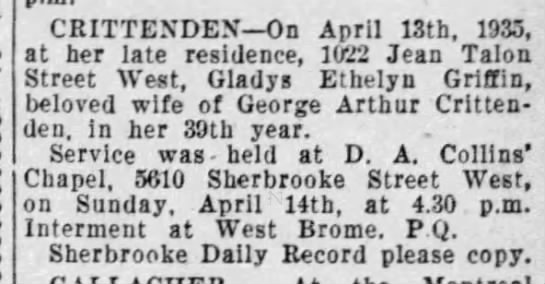 I also found out that Gladys’s mother was originally a Miller from Island Brook, Quebec. So that’s where the cheese came in. The cheese? Yes, the cheese!  My great grandfather made cheese and sometimes he made it together with Ivan Miller who also lived in West Brome. They entered their cheese at the World’s Fair in 1893 and won multiple prizes. Ivan Miller had a son named Iveson who I remember well.  Not only the stories he told me but the little leather purses he used to bring me back from Mexico each year. Ivan also did a handwritten family tree for my mother, but sadly it disappeared from the inside of the piano bench it sat in all those years and an important keepsake was lost.

Ater George Crittenden retired from the CNR he moved with his new wife to Mercer Island, Washington state. My sister Robin and I were sent there for the summer of 1963 as my mother had died and that was the year of the Beatles. I was a definite pain in the derriere being almost 13 but acting like I was 25. That summer I ran away to San Francisco for a week, and later made a laughing hyena of myself at the Edgewater Inn in Seattle cruising the Beatles. None of that can ever be found on ancestry.com and for that I am thankful.

I already knew that my Grandfather was an avid boxing fan, but he also did Chalkware wall designs and had an ant farm in the basement. Grampy had asked my Mother for 25 dollars to buy an ant farm for his Birthday in 1961. She was furious, but I guess the novelty for him was having a whole private world he could watch in the inner sanctum of his basement.

No one could figure out why after years of working for the C.N.R. in Montreal George just didn’t come home to West Brome or even his rental home in Cowansville and instead became an American. He lived on Mercer Island just outside of Seattle, Washington and when his cartoonist dreams never panned out he became one of the creators of those Chalkware “masterpieces” that you used to see on everyone’s walls. I guess if you really want to do something you will find a way like he did, and the only person that ever took time to understand him was himself. Not to engage in the pursuit of ideas is to live like ants I guess– and I try not to judge people’s choices without understanding their reasons. You will never understand anything until it happens to you.

That my friends is where the George Arthur Crittenden story ends. After the summer vacation on Mercer Island in 1963 I never saw him again. He died in 1970 and was buried next to his first wife Gladys in the Pettes Cemetery.  Do we really need ancestry when we all carry inside of us the people that came before us?  I guess it’s all relative.

They say that life comes 360 and it does. I enjoy dropping off small memory tidbits on the Mississippi Valley Textile Museum (Almonte ON) Facebook page. Curator Sean N Michael Rikley-Lancaster told me they were working together with Bruck Mills from Cowansville, Quebec which was also an enormous textile mill that employed the town like Rosamond Mills did for the town of Almonte, Ontario. Here is a picture from 1947. My mother Bernice Ethelyne Crittenden Knight is front and centre with the white dress and Joan Crawford hair. She worked for Bruck Mills and I am so proud they are saving the memories for Cowansville like Almonte has done. Photo from Ville de Cowansville.