There have been many changes in 97 years, but one thing remains the same; Smolkin’s Men’s Wear.

From it’s humble beginnings in 1921 in Almonte, Ontario Smolkin’s expanded to Arnprior in 1931 and Smith’s Falls in 1941.  Twenty years ago, in 1997, Smolkin’s opened a new location in Kemptville, Ontario.  This location brings with it the rich tradition and reputation of the Smolkin’s name built on 4 generations of quality and service.

Smolkin’s are experts at fitting men of all shapes and all sizes.  The reason we have lasted almost one hundred years is because we care about the quality and we care about your experience. We are a rare kind of retail experience because we truly care about you, our customer.  When you walk into Smolkin’s, Derek and his family will ensure you are treated just like one of the family.  You will have a personalized and very specialized experience that we challenge you to find anywhere else.

At Smolkin’s we have a saying; “If it doesn’t fit, Smolkin’s won’t let you wear it.”

Smolkin became a well-known name in the Valley, with his brothers running clothing stores in Almonte and Smiths Falls. read here.. 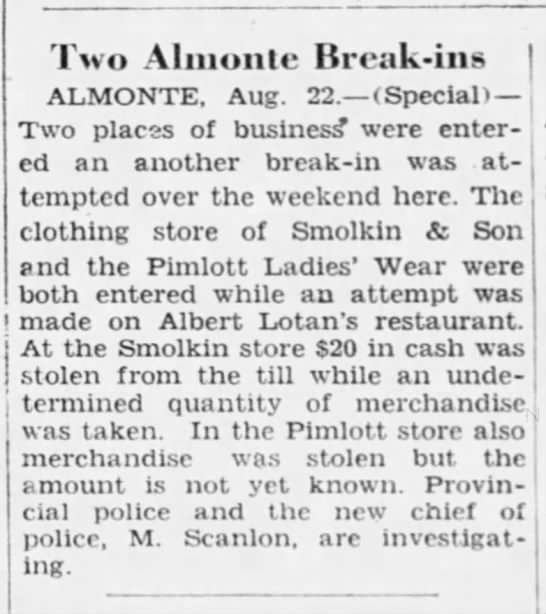 Stores in Almonte by Sandy France

Sandy France This was the makeup of the South side of Mill Street in the fifties….the order may not be exactly correct and I may have missed someone…but it’s close

Eugene O’Reilly had a store on the corner of Mill and Brae Streets and they closed out their business in 1928. Later on J. H. Proctor opened a boot and shoe store, also a harness shop in the back part of the building. On the other corner of Mill and Brae was the Bank of Montreal, then Smolkin’s store, Jas. Cochrane’s Men’s Wear, W. James Barber Shop, George Eades Boot and Shoe Store (Needham and Son, bought out Geo. Eades later on), A. B. Lotan’s Butcher Shop and on the second floor of some of these buildings were four places of business – A. Allan, tailor; R. A. Jamieson, lawyer; T. R. Patterson, dentist; Greig & Greig, lawyers. Mr. Pittard’s printing office was next. He once was editor of the Almonte Times paper. Then was W. D. Lea’s bakery and Laura and Nellie Hogan’s Millinery shop. Though the Hogans now are retired from business they will long be remembered, not only for their millinery work, but also for the kindness they showed to all who called at their shop.

Further along Mill street was Peterson’s Confectionery, Ivan Duncan’s Barber Shop, Telephone Office, W. Lawford’s Store, James Moreau’s store, then the Dominion Store. The last store on the block was Fred Robertson’s, who sold out to Wm. Pimlott in 1928.

SMOLKIN, Bessie – At her home in Almonte, Ontario, on Monday, August 22, 1988, Bessie Friedman, wife of the late Moses Smolkin. Mother of Paul and mother-in-law of Nancy. Loving grandmother of Sarah and Victoria, sister of Lilyan Kaplan, Ida Vexier and Ruth Friedman. Friends may attend the funeral at the Jewish Memorial Chapel, King Edward at Rideau Street, on Wednesday at 10 a.m. Interment Jewish Community Cemetery. Shiva private. Arrangements by Hulse and Playfair, Central Chapel. Those wishing may donate to the Heart and Stroke Foundation of Ontario, 1729 Bank Street, Suite 303, Ottawa, Ontario KIZ 9Z9, or the Almonte General Hospital.

Mrs. John Smolkin, well known and highly regarded resident of Almonte, died in an Ottawa hospital on Saturday morning following an illness of several months. She was 74 years of age. Mrs. Smolkin was born in Russia and came to Canada at an early age and resided in Ottawa until 1923 when the family moved to Almonte. Mrs. Smolkin was married in Montreal 54 years ago to John Smolkin, who died about four years ago. She was a member of the Ottawa Synagogue. Actively interested in community affairs, Mrs. Smolkin was a member of Almonte Women’s Institute, the Alexandria Club and was particularly active in all Jewish philanthropic and community affairs in Ottawa. Surviving are five sons and three daughters, Max J. Smolkin, Arnprior; Robert Smolkin, Calgary; Ben Smolkin, Smiths Falls: Dr. Sam Smolkin of Ottawa; Moe Smolkin, Almonte; Mrs. A. Levitan, Almonte; Mrs. Stuart Bart, New York and Mrs. Alec Bellan, Toronto. Also surviving is one brother and one sister, Frank Miller, Saskatoon and Mrs. Louis Vogell, Swift Current, Sask. The funeral was held on Sunday afternoon from the King Edward avenue chapel with Rabbi Eckstein officiating. Interment was in the Metcalfe Road cemetery.

Where did Marty Get his Beatle Hat?

Almonte in the Twenties