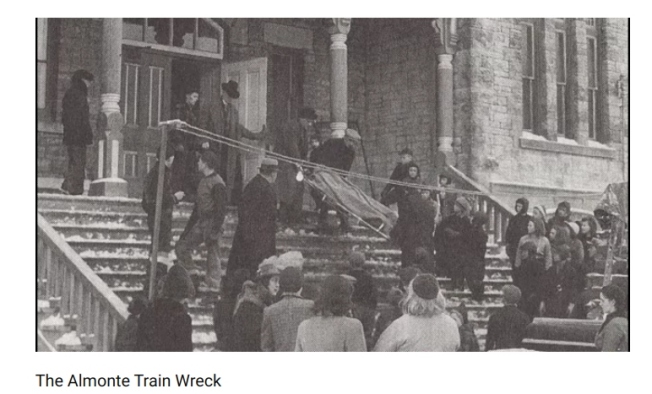 In early January of  1943 John C. Howard, 64, of Smiths Falls, conductor of the troop train which plowed into the rear of a C.P.R. local-at Almonte on December 27, killing 36 persons and injuring 150 others, committed suicide. His body was found in the Rideau River and left a note that he took his own life because of the wreck.

The note read in part:

In the note Howard also said he was being blamed for the wreck which “brought sorrow to so many people” and’ that he could not stand it any longer. Chief Lees quoted that the wreck was not Howard’s fault, but that many people thought it was and “would go on thinking it’.

John Howard was to have been one of the principal witnesses at the public inquest into the train disaster which was to be in the Almonte Town Hall the next day at 2:30.

So was he guilty?

As a late-arriving Sunday night local train sat at the station in Almonte, Ont., a troop train from Red Deer, Alta., carrying soldiers bound for Britain, crashed into the rear cars, which were made of wood, killing 39 people and injuring more than 200. As a result of the crash, the Board of Transport recommended that a protection signal west of Almonte be erected.

Did you know the manager of the O’Brien Theatre did not want anything to do with the accident so the police had to go and take the doors off to bring the bodies in.

The Town Hall, designed for legislative purposes, was pot big enough to be a morgue for such a major catastrophe.- The dead and injured overflowed- into the Almonte Hotel, O’Brien Theatre, and Almonte House, an apartment building, all within a stone’s throw of the scene