I love getting photos that folks have and try and tell their story. Thank you to all that do and please keep sending them in. We know now the rest of the story. Thanks Joyce Sibbitt for this photo–

I’m not a Cram…. but I came across this picture just the other day.. A picture of Ed Sibbitt (my grandfather)and Norm Cram

Norm was the brother of Albert Cram and born in either 1871. The name of Albert might sound familiar as he was once mayor of Carleton Place and they lived in my house Springside Hall ( Hi Diddle Day) on Lake Ave East. Norman worked with his brother in their woollen business they had on Campbell Street. In 1884 to make way for the building of a new flour mill the John F. Cram tannery and wool plant was removed to Campbell Street after fourteen years of operation on Mill Street. In 1886 the new tannery of John F. Cram and Donald Munroe was destroyed in a fire loss of over $10,000.

An automobile accident in July of 1912  was responsible for the death of one of the best known phyelctana In the Ottawa Valley—Dr. Daniel Muirhead. of Carleton Place. He was out driving on the North Gower road in company with Mr. Norman Cram, of Carleton Place, and was proceeding at a fair speed, when one of the wheels, caught in a rut in the road throwing the steering gear out of order.

The machine swerved and overturned into the ditch crushing Dr. Muirhead under the weight. Fortunately for Mr. Cram he jumped from the car or undoubtedly he would have met with the same fate. Dr. Muirhead was terribly injured and expired within thirty minutes before medical aid arrived.

Mr. Cram, who is well-known woollen manufacturer with his brother Albert had been touring the Kemptville district during the day purchasing wool, and they were on their homeward journey when the fatality occurred. The scene of the accident is on a side road just west of John Geddes corner, where the road is in a very bad state. At one point they had to enlist the help of a farmer to move the automobile out of a hole.

The deceased friends were immediately acquainted with the sad news, and Coroner Dr. Danby of Richmond subsequently viewed the body. Dr. Muirhead was fifty years of age. and unmarried, but his brother Mr. W. J. Muirhead, a hardware merchant of Carleton Place, survives. Mr. Cram is a brother of ex-Mayor Albert Cram of Carleton Place.

Norman was a bit of a dandy and there were a few notations like this one below. This was on the front page of the Ottawa Citizen September 21, 1921:

Norman Cram, of Carleton Place, who is charged by P.C. George Finlay with driving an auto, while intoxicated, upon a public highway, was remanded until Monday, bail being allowed at $50 cash. ($718.46 in 2020)

Norman McLeod Cram, son of the late John F and Margaret Cram and brother of the late Albert Edward Cram of Carleton Place died Tuesday morning at an Ottawa hospital after only a short illness. Mr. Cram was born in Carleton Place in 1871 and his whole life was spent there. Upon the death of his father he entered the firm of J. F. Cram and son of which he was the head of at the time of his death. March 21, 1930 Almonte Gazette

Did you know Angeline Cram, daughter of Albert and niece of Norman Cram’s first name was Norma, named after her uncle Norman Cram?

It is quite possible Norman is in the middle here. Waiting at the Carleton Place Depot- Photo-Rod Anste.

The Short but Illustrious Life of Dr. Daniel Muirhead

Photo–Vintage Carleton Place & Beckwith This clipping is from a school scribbler that was kept by Louella Edith Drynan (nee Shail). THEN

Years ago Mayor Eldon Henderson received this photo (news clipping) from the Victoria Archives in British Columbia that had been in their files for many years. As it was a Carleton Place, Ontario photo the archives felt it should be in our local photo collection.

He was confused at first, but after finding out where the store had been located Mayor Henderson began a contest for the general public. The winning location answer received a free one year subscription to The Review. Do you know where it was in Carleton Place? It was on the corner of High and Bridge Street where Mr. Campbell once had his store. I have sat here examining the buildings to the side and amazed how this building transpired over the years today. Who would have known? How did the photo end up in British Columbia? Keep reading…

From Joyce Sibbitt--Some interesting history for sure. A few corrections. Ed Sibbitt was Charles Edgar (not Edward)  I know my dad Louis Edgar Sibbitt was born in Winnipeg Manitoba Feb 1906. Some further info from my sister, Evelyn, on the reasons that picture may have ended up in the BC archives— I can only think that it had something to do with them being first in Minnesota, then in Winnipeg. I don’t think that they ever went further west, though Nanny (Eva Rose neé Davis Sibbitt) did have a brother, Frank who was stationed in Victoria, before he left to seek his fortune in the Canadian Yukon, then NWT gold rush, before dying in Vancouver (not sure of the date of his death off the top of my head). It is possible that the clippings were sent to him, and thence to the BC archives… Eva Davis Sibbitt was Charles Edgar Sibbitt’s wife. 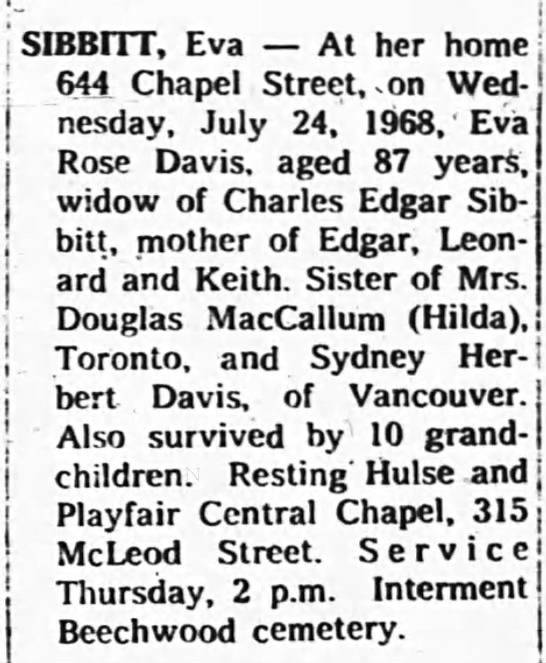 How Did A Carleton Place Photo End Up at the Victoria Archives?