Margaret was the daughter of Andrew Cochran and Isabel Erskine, both of whom came to Canada from Glasgow, and were among the first settlers on the seventh concession line of Ramsay at the very genesis of that municipality named for General Geo.Ramsay, ninth Earl of Dalhousie, who fought under Wellington at Waterloo.

They established a home on lot 22, and It was there Mrs. Yuill, the 4th child of that union, was born in 1844. Mrs. Yuill attended Black’s School in the days when the educational facilities were meagre and was fortunate in gaining the rudimentary principles ofeducation. In 1864 she was married to Joseph Yuill, son of another pioneer family.

Rev. Dr. McMoran of Almonte, performed the ceremony. The couple settled at once on the present seventh line homestead, they ultimately acquired fix hundred acres and one-third of that property is still owned and operated by the family.

On that fine terrain, about three miles from Carleton Place, Mr. and Mrs. JosephYuill upheld the best traditions of the Canadian pioneers for their ability to achieve success over great obstacles, and by precept and example to encourage others towards the higher attributes of their calling. They made their farm a recognized centre for Ayrshire cattle, and. with the late A. A. Wright, of Renfrew, organized the first “travelling dairy” and gave public lectures and demonstrations on butter-making as far afield as Manitoba.

Before and after–Black and white photograph from the Carleton Place and Beckwith Heritage Museum of 56 Front Street. Known as the Joseph Yuill house from: Standing on Front Street

Mr. Yuill was one of the founders of the Patrons of Industry, a fluent speaker and an ardent worker, while Mrs. Yuill helped establish the first Women’s Institute organizations in this district. She spoke from many platforms throughout Ontario, was the first president of the Carleton Place branch, and latterly was honorary president of the district of North Lanark. She did splendid work for the W. I. and the Red Cross and in 1917 both organizations presented her with life membership badges.

She was also a valued member of the United Farm Board. For a time the Yuill farm was a government fattening station where fowl were prepared for the British market and in the summer of 1901 Mr.- and Mrs. Yuill visited on the Old Country and studied the needs of that market.

A great many of their primary methods in the raising and preparation of fowl for export and in the dairying industry are in pretty general today. In church work Mrs. Yuill was as equally industrious, first in the historic little “Auld Kirk” in Ramsay, but in later years in St. Andrew’s Presbyterian church in Carleton Place.

Mrs. Yuill witnessed tremendous changes during her lifetime of nearly a century, in her time agricultural facilities developed from the simple sickle and the reaping hook to the present impressive and all-embracing scientific achievements. She lived long before the trains, telephones and telegraph were known in her native land and witnessed the tremendous growth of the textile industry in this country. 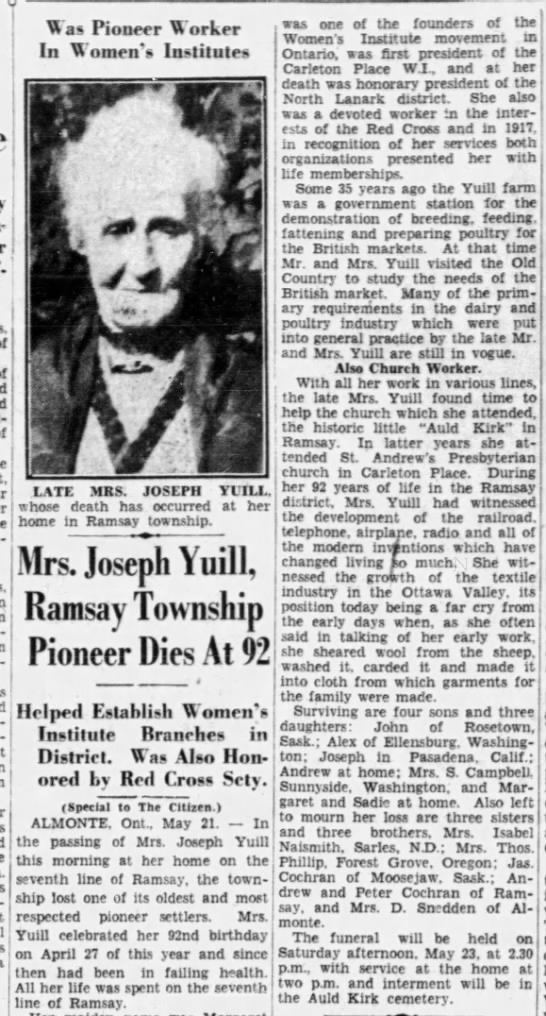 On Christmas Day a wedding occurred that linked a member of each of two of the leading families in Ramsay, Mr. W. J. Paul, son of Mr. John Paul, of Mont Blow Cottage, was married to Miss Bella Yuill, daughter of Mr. Joseph Yuill, of Meadow Side Farm, the leading stock raiser in Ramsay township. Over 100 persons helped to consume the wedding cake. The Rev. Mr. McNair united Miss Yuill and Mr Wm. Paul in a contract for life on that occasion.

You can also read Linda in The Townships Sun and theSherbrooke Record and and Screamin’ Mamas (USACome and visit the Lanark County Genealogical Society Facebook page– what’s there? Cool old photos–and lots of things interesting to read. Also check out The Tales of Carleton Place. Tales of Almonte and Arnprior Then and Now.

The Life and Times of Cora Yuill