In December of 2011 the sale of this portrait of the Rice family portrait took place in the Berkeley Court Hotel, Dublin, on December 14.

Although time has elapsed since the mighty Titanic on her maiden voyage plunged to the bottom of the sea after a collision with an iceberg, the world has not ceased to shudder at the many tragedies of the disaster. About sixteen hundred lost their lives on that occasion and the proudest work of the shipbuilder was rendered a mockery when in combat with the worst perils of the ocean.

Maybe this is old news to everybody except me ( no, me too said Linda)… but I learned today that one of the victims of the Titanic disaster in 1912 was born in Carleton Place. Master Eric Rice was born at Carleton Place, Ontario on 24 August 1905 and later baptized on 26 September the same year. Click here-
Last week I found a  reprint of  The Sinking of the Titanic that was originally published in 1912. There on page 216 was Mrs. Rice’s name on the List of Identified Dead. Margaret Norton Rice was described as a “factory girl” whose address was Glasses Lane in Athlone, Ireland as a young girl.

Mr. and Mrs. Rice made their home at North Gate Street, Athlone and welcomed their first child, William James who arrived on 13 April 1899 in that very town. The child lived less than two months and died on 31 May 1899. He had swallowed his pacifier four days previous and never recovered, dying after a series of convulsions.

In March 1903 the family of three arrived in Montréal, Québec and were to become parents once again later in the year when another child arrived on 30 November 1903, George. There William Rice got a job with the Grand Trunk Railway as a shipping clerk. They made their way west and settled in Ontario where William Rice worked as a clerk, first at Carleton Place and later in Toronto.

Their youngest son, Francis, was born in October of that year at E. 1417 38th Ave., part of Manito Heights, which was later torn down. William Rice’s occupation was listed as a painter in 1907 and a driver in 1909.

By 1910, the family had moved to Hillyard, according to the directory, where Rice worked as switch operator for the Great Northern Railway. His life came to a tragic end on Jan. 24 when another car hit the train car he was working under, crushing him. Railway accidents were common at the time. A Spokesman-Review index from 1910 has five oversized pages listing railroad accidents in the region that year, many of them fatal.

The 1910 census records five Rice children, all boys: Albert, 8; George, 6; Eric, 4; Arthur, 2; and Eugene, 5 months. The boys’ place of birth is given as Washington, but that was unlikely, because other records show the family living in Canada at the time. There were a lot of people who wanted their children to be U.S. citizens, so they falsified records.  Rice was in his early 30s when he died at Sacred Heart Medical Center. By the birth date given on his tombstone, he would have been 32, but his death certificate lists his age as 34. He was buried in a pauper’s grave at Fairmount, and that’s where the Titanic links began.

Margaret and her children appear on the 1910 US census living at 435 Sheridan Street, Hillyard, Spokane; with a payout she received from the railroad company as recompense for her husband’s death Margaret and her sons soon returned to Ireland where they still had relatives and they appear on the 1911 census living at Castle Street in Athlone with her young niece, Sligo-born Kathleen Norton, the daughter of her brother Michael.

They were never able to find the money source for the payout in legal records, but believe that there was definitely a settlement from the railroad company for her husband’s death. The young widow bought the house on 38th Avenue where her youngest son had been born, and paid for Rice to be reburied with a carved headstone that still sits in the cemetery. That April, Margaret Rice took her children back to her hometown of Athlone, Ireland. In 1912, she decided to return to the U.S., likely because of the property she owned. With perhaps the stay in Ireland not intended to be permanent the family soon made plans to return to Spokane, possibly convinced to do so by several others from their locality who would be making a crossing of the Atlantic aboard the Titanic. Charles Hays, the president of the Grand Trunk Railway, for which her husband had worked in Canada, was also aboard the Titanic was a personal guest of J. Bruce Ismay, chairman of the White Star Line.

When the Titanic sank with its three classes of passenger, a disproportionate number of victims were in third class. It was impossible for Margaret to help all five children that night when the Titanic began to sink.  Bridget Mulvihill reported that she saw Mrs. Rice standing on either the boat deck or A-deck, clutching her youngest son to her breast and with the other boys holding on to her skirts. On the morning of April 20 in a cloud of heavy fog, they saw firsthand the aftermath of the world’s deadliest maritime disaster. As one passenger described ft, they witnessed “acres of water filled with bodies.”

Many victims were found to be carrying small fortunes in cash but sadly Margaret was not one of them. The Mackay-Bennett recovered $15,000 from its 306 bodies the modern equivalent of more than $350,000.The entire family was lost in the sinking and Mrs. Rice’s body was the only family member that was recovered by the Mackay Bennett and identified. Each body from the hundreds of bodies floating in the water was given a number as it was taken on board. Margaret’s body was given the number twelve.

The Titanic sank through the course of April 14th and April 15th 1912. By late April, sun and salt began causing lifebelts to fray and break, dropping their perished wearers to the bottom of the ocean. According to Titanic discoverer Robert Ballard, the places where their bodies fell can still be seen on the ocean floor in the form of matching pairs of shoes laying side by side.

Margaret Rice and her five sons

She was identified as Roman Catholic by her rosary and as Margaret Rice by her box of pills prescribed on 9 April 1912. The family’s last few days in Ireland were spent in a lodging-house on Mardyke Street in Athlone. The day before the family were to board Titanic at Queenstown – the 10th of April, Margaret purchased a box of pills in “Fleming’s” chemist Athlone as well as a brand-new pair of shoes in “Parson and Sons”. 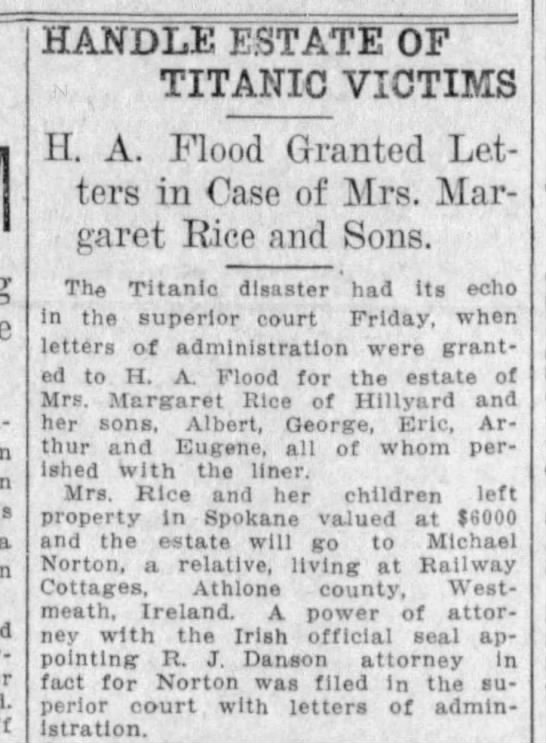 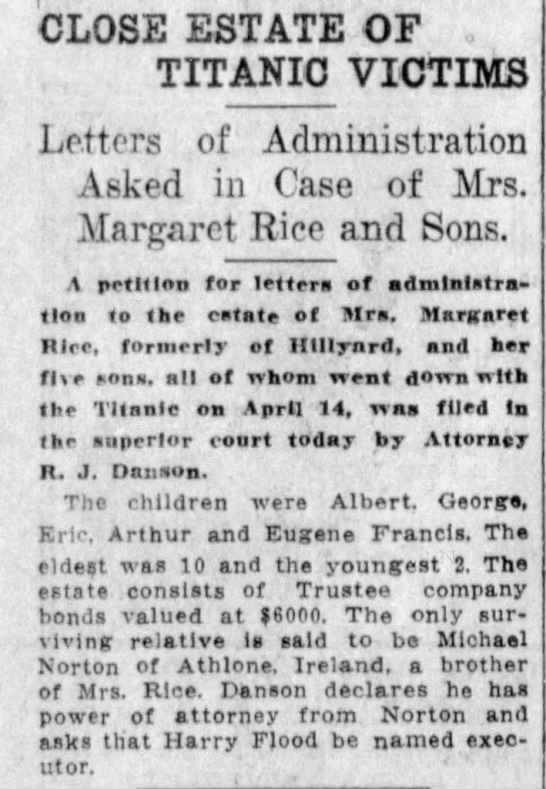 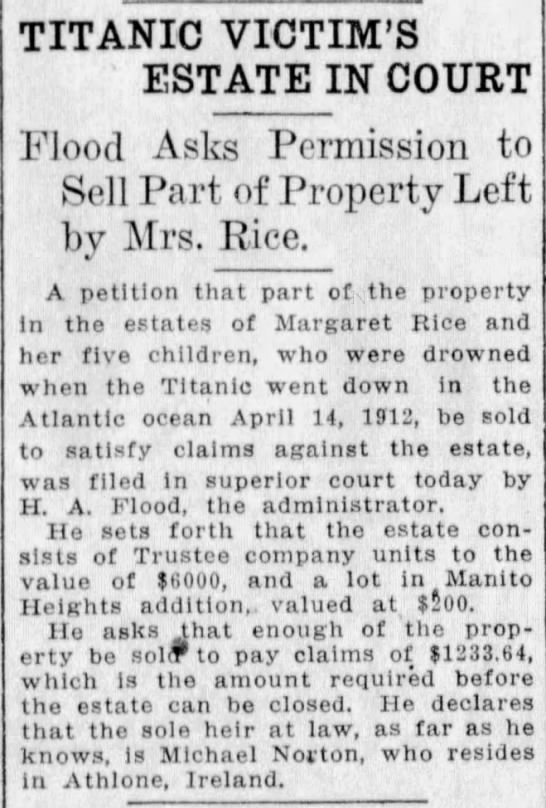 The Semi-Weekly Spokesman-Review
Spokane, Washington
06 Mar 1914, Fri  •  Page 6
I wondered why Michael Norton, Margaret’s brother was not coming to America to claim her house. It did not take too long to find out that Michael was in trouble all the time for alcohol and spent a great deal of time in jail.

The Titanic Disaster according to the Almonte Gazette