In 1941 the question of the population of Almonte  caused a mini scandal from Almonte to Montreal.  It seems that the injured civic pride of Almonte which was considered by some to have suffered a severe blow when the town was referred to in the Montreal Gazette as a “village of 2,000 people.” Since  the day in print the population had ranged as high as 23,000  to a more modestly, 6,000. The editor of the Almonte Gazette finally put things right at the figure Of 2,300 or 2,400.

A poetically inclined friend of the Ottawa Valley town living in Moose Jaw breaks into verse to soothe those upset in Almonte.

I have before me a cutting from an unknown paper in which the writer deplores the fact that Almonte was referred to as a village of two thousand inhabitants. Let me tell you that the doings in Almonte are known in Western Canada, where many of your former residents have grown old. Almonte is a place I want to see too, as I have heard such glowing accounts of its beauty spots.

Forgive me for offering the following which came to me on reading the complaint from “A Reader.” Fret not, dear Reader, at Almonte’s obscurity, Lest worry shall make the count less; Ir your Town. Village or City enjoys security, That’s all that matters, I guess. Remember Callander, the home of the Quints, An obscure little place and small. Overnight became famous, Dr. Da foe a prince. It’s not numbers that count after all. Thanking you sincerely, LILIAN VAUGHAN GAY.

Almonte Editor’s Note The Almonte editor appends the following:  We may say for the benefit of our readers that the letter referred to by our correspondent above, appeared originally in The Montreal Gazette and is curious for the number of errors it contains in respect to Almonte’s population. First the Montreal newspaper put it at 2.00, then, by a typographical error, it was increased to 23,000, and finally, in its appended note the editor sets it down as 6,000.

As a matter of fact the town has a population of 2,300 or 2,400. Below we publish the letter, that appeared in The Montreal Gazette, obviously from the pen of some townsman or former townsman indignant over the fact that Almonte had been deprived of 300 of its population.

In your paper of recent date I noticed where the Dorothy’s have contributed 500 to the purchase of a “Spitfire.” Allow me to make a correction and give Almonte its proper title, the “Town” of Almonte”, and its population are at least 23,000. This town, like many others, suffered very severely from depression, unfortunate fires, unemployment and was hard hit in its textile industries. It has, however, managed its three, meals a day, has a duly elected mayor, councillors, electric light commission, board of education and a representative from our town on the County Council of Lanark County. It has fine schools, churches, industries and other attractions, and is gradually getting back to its former prosperity. It was called, at one time, the “Manchester” of Canada. 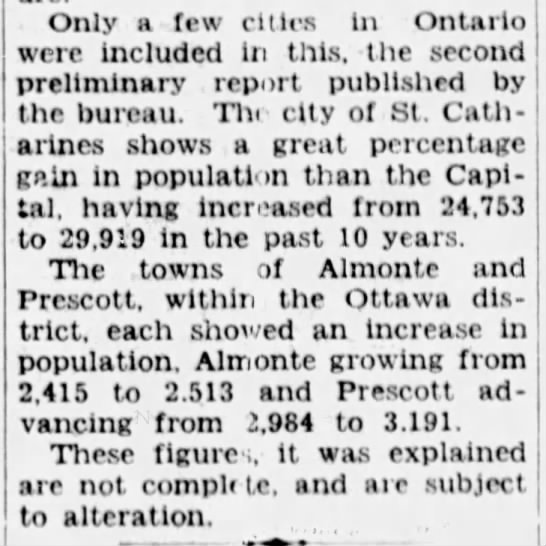