In December of 2016 I wrote a piece about Dorothy A. Seese, who most of you know as  child actress Phronsie in the Five Little Peppers series. My friend had looked after her in her final months and through that period of her emails I felt like I knew Dottie. My friend’s faith is formidable to put it lightly, and I wondered how the two connected. Today as I got another comment on the first story I decided to do some research.

Dorothy in her later years still as beautiful as ever.

“Every time I’ve visited Dottie for the past 8 mos, I’ve always felt it was the last.  I don’t know how she’s holding on.  She says the Lord will take her when He’s ready, not when she’s ready.  But she so wants to join Him and get her glorified body.  The jaundice is really bad, but then it has been for nearly 2 mos now”– My friend’s last email about Dottie before she passed.

So what happened to Dottie?

Through the years Dottie became a Christian conservative who hoped through her writings that things would go back to the constitutional and moral foundations upon which she felt this nation was founded. “Dorothy Anne Seese” (she added an e to her middle name)  was a freelance political writer for Patch Work papers and a regular featured political columnist to several conservative websites. She was based in Phoenix, so it was easy to see how my friend became a good friend to her as they were both strong believers.

There are some photos on ancestry.com but they are private– so I don’t know if they belong to the one super fan she had that my friend had told me about. She had wanted to come to her final resting place but she was ill. I will keep digging.

Just when you think you have found everything — you find two articles that rock the whole bio. Dorothy’s father, Lloyd Seese was convicted of murder in July 1958 and a few days before her boyfriend Lt. James was killed. This all happened in 10 days and it is no wonder she turned to Christianity and became the conservative writer she left a legacy to. 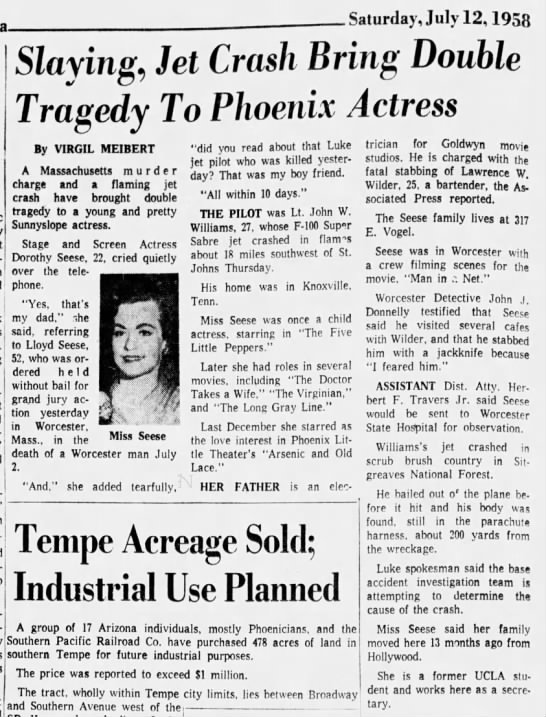 NAME: Ms. Dorothy Ann Seese
RESIDENT OF: The Sun City Retirement Community of Phoenix, Maricopa County, Arizona
BORN: Wednesday, 10 July 1935
DIED: December 2015
C.O.D.: Cancer
AGE: 80 years, 5 months, & ? days
PARENT(s): Mother – Swan (Raised by her Grandmother, after her Mother abandoned her when she was 2 months old, but her Mother reappeared after little Dorothy came into prominence.)
EDUCATION: Liberal Arts degree from UCLA in 1955
OCCUPATION(s): Actress-Child Star – Business Systems Analyst for 15 years – Then for the next 25 years she worked as a legal secretary, a legal assistant, and a paralegal – In 1997 she would became disabled due to a spinal injury after which she retired and moved to Sun City, Arizona

NOTE(s): She was believed to be the last surviving cast member from the movie series, “The Five Little Peppers”.

(The story was told: When Dottie reached the age of 21 she went to claim her wages that were supposed to be held in-trust for her, some $150,000.00 in earnings as a child actor. What she ended up with was a check for $900.00 and change. The rest of her life she believed that her Mother had taken her earnings.)

Oddly enough Prince, the Great Dane, does go to the school with the kids but is never seen there or in the rest of the movie. 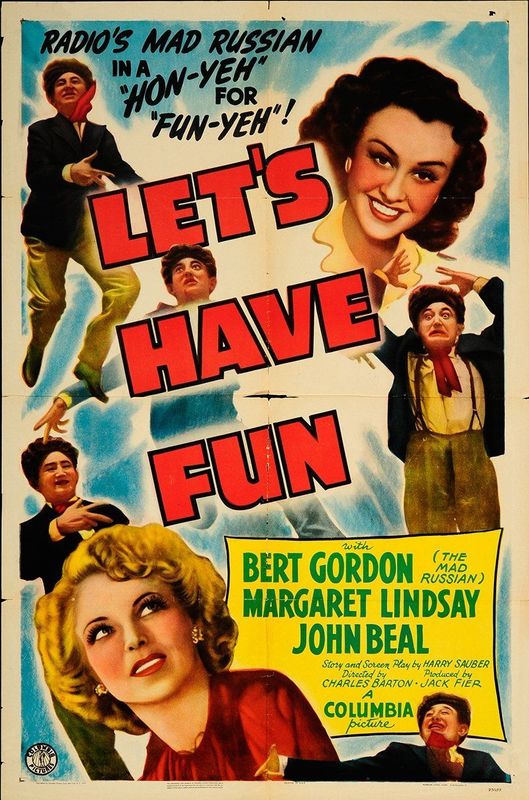 Soundtrack (1 credit)
1939Five Little Peppers and How They Grew (performer: “Happy Birthday to You” (1893) – uncredited) 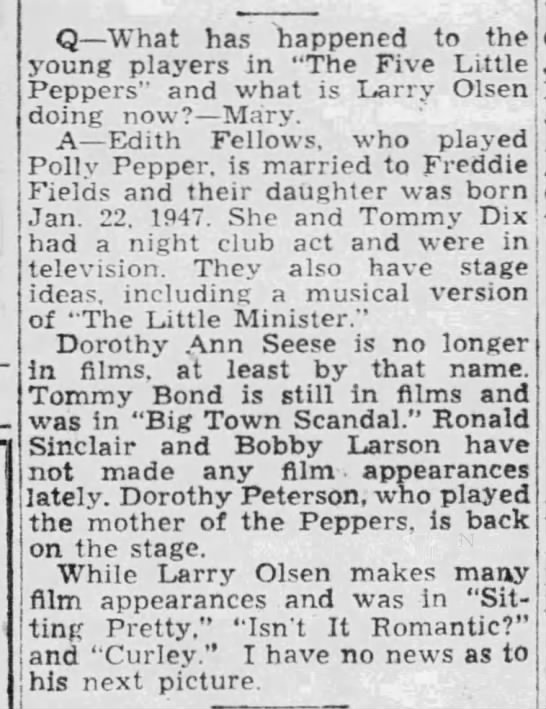 In Memory– The Last of The Five Little Peppers Part 1