People in this part of Ontario were pleasantly surprised on Sunday morning to hear an announcement over C.F.R.A. to the effect that Mr. Frank Bates, clerk-treasurer of Lanark Township, who had been missing from his home at Hopetown for over a month had communicated with his relatives.

It appears that Mr. Bates, who was suffering from amnesia, was at the Empire Hotel in Winnipeg when he telephoned his brother in-law, Mr. James Wiliis of Lanark Village. Mr. Willis and his sister, Mrs. Bates, left at once for “Winnipeg and Mr. Bates came home with them.

The man whose disappearance caused such a mild sensation is a veteran of the last World War and added to the strain of his period of service, was a head injury which he received some five years ago when he was kicked by a horse.

In addition to his duties as clerk treasurer of the township, he had a farm and he was also on the staff of the unemployment insurance office in Perth. Just before he disappeared, an order had -come through from the civil -service commission making his post permanent.What puzzled the police and his friends, who prosecuted a search for Mr. Bates, was the absence of any motive. His books were in good shape and he had no more serious domestic and social anxieties than other people have in this fast moving age.

He was seen in Toronto by a man who knew him well enough to recognize him and that was the last that was known of his movements until the welcome message came from him at Winnipeg. People in this county were very sorry for his family, especially his wife. She was made acting clerk treasurer of the township during his absence and carried on the duties in a way most satisfactory. 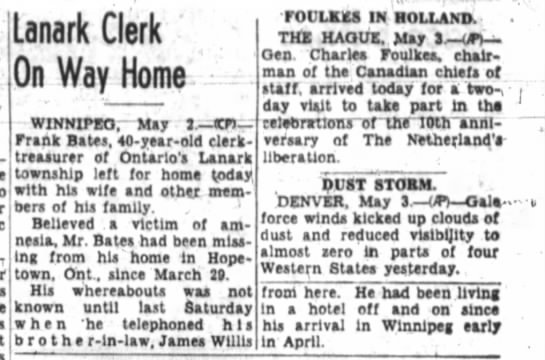