Linda Nilson-Rogers Was Fraser’s snack bar when I moved here, 1964

Susan Elliott Topping Frazer’s! I remember going there after church with my Grandpa Clement (Frank-Cheeser) for a milk shake. Mom would sen us for mellow rolls. We would cut across the creek at Mrs. Mantel’s house, through the field beside Munor’s and cross the road. Mr. Frazer and his wife had the best penny candy!!

Margaret Jones Drennan to Susan Elliott Topping My favourite penny candy was the licorice black babies and the black balls. You wouldn’t dare call that candy by those names these days or you may get tarred and feathered.

John Morrow I believe Ken lived just a couple of doors from my grandmother, Effie Robertson and her second husband Cliff. They lived at 202 Augusta and my Dad’s uncle and aunt, Joe and Emma Morrow, lived at 165 Augusta.

Cheryl Millar-hanna I remember my Aunt coming from Pembroke for a visit and she would take us in and buying a whole box of Swedish berries for us to share ! Loved that place!

Kathy Dunbar Where was that at Susan.?

Susan Elliott Topping Just on the bend at the lights (left side)almost across from Blackburn’s garage.

Pat Newton I was coming out of Fraser’s when I heard the Fire siren it was the Collies mill fire.

Kathy Duncan Fraser’s was a great place! Lots of treats

Samantha Gernhart I used to live pretty much across the street. I remember at one point it was an ice cream store

Julie Sheaves I’ve always wondered what was there! Thanks for posting Linda!

Margaret McNeely Remember it as Fraser’s….use to stop there after high school…..made the greatest hot fudge sundaes!

Alyssa Toshack A couple other small shops popped up. I remember a popcorn company. Small operation. But always a great spot for an after school treat!

Jim Sonnenburg-Drummond I was trying to remember the name of it!!!

Chris Hume Yes! There was a very devoted group of Nipperkin-ians back in the day! ❤

Rosemarie Mote Fraser’s, very near our house on Queen Street. Would go there for candy!

Margaret Jones Drennan Gordon and Edna Fraser owned and operated this corner store for many years. In the front window they had all their penny candy, used to spend my allowance there. Also a great selection of comic books.

Had a restaurant area at the back of the shop. A lot of high school kids often went there for lunch or to get together after school, Hamburgs, chips, and cokes were the popular choice. They also had stools at a dairy bar where they sold ice cream – 7 cents for a mellow roll cone. Every so often, for a very special family treat, my Dad would take me there to buy a big bottle of Pure Spring Gingerale. They had a daughter, Mavis Fraser, who married Allen Dunfield. The Fraser’s were a lovely family. Good memories

Jane Stewart I remember the tragic accident that took her life. I was friends with their adopted daughter Wanda.

Margaret Jones Drennan Susan Elliott Topping Did they also have two other children, Ronald and Heather?

Karin Setter Margaret Jones Drennan They also had a son Chris. We were neighbours. A nice family

Margaret Jones Drennan Karin Setter Thanks Karin, yes, Chris, how could I forget him. I don’t remember of Wanda though. Yes, lovely family.

Dawn Jones Margaret Jones Drennan : I went to school with Heather. No idea where she is now.

John Morrow I have a copy of Edna Fraser’s Easy Penuche Icing recipe from a cookbook published by the Almonte United Church about 1955 or 56. If anybody is interested I can post it (it was in a recipe scrapbook my grandmother, Effie Robertson, kept).

Gradually add icing sugar (beat after each addition) until thick enough to spread.

Mary Anne Harrison There was one of these dunking birds in the window at Fraser’s. I was mesmerized by it when I was a kid. Guess it didn’t take much 😄

Scott McBurney I have a Happy Bird going all the time in my classroon in Kansas. If the water gets too low the kids fill it up, dunk his head, and start him up again!

Scott McBurney Mine has a yellow hat and his feathers are worn off.

Susan Elliott Topping Scott McBurney My Aunt Vi had one of these! Wonder where it is now?

Randy Rivington McDonald’s had a store there.

Sandy France The Frasers would let high school kids bring their lunch in and eat it, as long as you bought a 7 cent Coke. Also, Frasers was the cut off for smoking on Martin Street..past Frasers you couldn’t smoke on Martin Street. Don’t remember if kids smoked in Frasers or not. This was the ‘50’s.

Glenna Kells Wow that’s not still there is it??

Peter Low In all my life in Almonte, I’ve never been to Frasers. As of the above photo, one would imagine it could be a start up for an up and coming entrapreneur.

Ernest Albert Peter Low : Hi Peter , Ernie Little saying hello !! Brenda and Judy’s brother !! My mom use to keep a eye on you guys !! I use too beg for money so I could go to Fraser’s !! Lot of things mention on this site today , wow , I’m talking back 65 – 70 years ago Peter !!

Susan Elliott Topping Ernest Albert Wow! I went to school with Judy and never knew she had a brother. Your Dad used to cut all my brother’s and my Dad;’s hair. Your Mom and Dad were such nice people.

Marion MacDonald Got my candy there in the 50’s.

Scott McBurney I remember stopping in occasionally for a Pure Spring ginger ale or salt and vinegar chips on the way home from school.

Jayne Munro-Ouimet Bob McDonald once owned this store and lived in the house attached. I my memory is correct. Liz Robinson, am I correct?

Paul Latour I remember having breakfast there a couple times about 20 years ago. Nice little coffee shop. Too bad its not being used as such today. Was that Nipperkins?

Susan Renwick-Clark Fond memories of going to Fraser’s with my Dad to get ice cream! He passed away this year so frankly this was a great memory to see this week!

Judy Cressman I knew it as “Frasers’ restaurant “ when I went to high school in the 60s. We had many chips and gravy or hamburgers there.

Pat Lipton i spotted it a few years ago…looks like it was a storefront. Rough shape right now

Donna Timmins Fraser’s Store.. Gordon was a gem! Loved the ice cream mellow rolls. , candy and my first & only pack of cigarettes that we sneaked out to try. Oh My True Confessions!

Heather Leary Can remember as a kid from CP I participated in the walk to raise money to build the arena in Cp. the walk took us past this store and I stopped in and bought red licorice laces.lol

When I was a teenager in the 50’s ,all the kids in town used to stop there at McDonald’s to get a Mellow Roll ice cream cone. The ice cream was in a cardboard roll like a toilet paper one which was removed before giving it to the customer.My cousins in Perth, whose father Russell Robertson owned the Perth Dairy, said they hated those cones because every summer they were sick of unrolling them for kids.

McDonalds had other goodies too and must have been a corner store selling items other than sweets to kids.

Donald Price He had a great assortment of penny candy and grab bags. He was a very nice man.

The popular Wednesday night nets continued during the year at 9:00 p.m. on 147.27 MHz with net control Les VA3BZQ.  The doughnut or coffee meetings were now held on the 2nd and 4th Saturday of the month, at 9:30 a.m.  Nipperkins coffee shop in Almonte was the new gathering place, with some meeting held at the Country Style doughnut shop on Highway 7 in Carleton Place.  Volunteers continued to help with the annual Goblin Partol on Halloween night to help local Almonte authorities keep the streets safe. 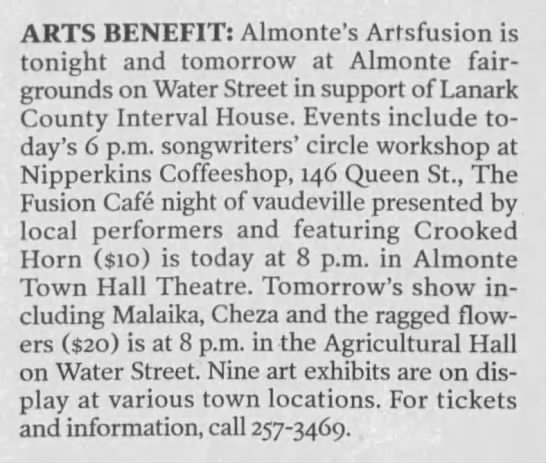