Photo-Rebecca Bolton Morris—Hi Linda, My mother was a Stanzel from Carleton Place, and her grandfather, Stephen Stanzel, was in the shoe & boot business in Carleton Place for many years. She told me that he was involved in horse racing, but I think she may have exaggerated a story she heard as a child. Do you know of any horse & buggy racing around Carleton Place, perhaps around 1890 – 1920?

Yes, Carleton Place had horse racing down below High Street and also the biggest horse show in the Ottawa Valley every year at Riverside Park. They also did ice racing too.

Joann Voyce As a child in the 1940’s, I remember going to sulkie racing up High St where the new subdivision is now

Dawn Jones Ivan Farr had horses and participated in racing. In the 70’s I think.

Lynne Johnson The little park by High and Bridge is where the Bruntons used to train for sulky races, if I’m not mistaken?

Joann Voyce That was next to Miller’s Horse Stable. That is where the horses were boarded as well and were walked daily in the little park area, I lived on Thomas across from it for 8 years and then on High Street 2 doors from the Stable. The Miller’s are my relatives and I was in those stables many times

enny Trafford There was a track up the end of High Street about where that housing development is going in. I’m sure it was for the horses, but I also know it was used as a go-cart track because my Dad belonged to that go-cart Club and practiced and raced up there.

Those horse shows in Carleton Place. Horse races at Lake Park and later on on High Street .. Clipped from The Ottawa Journal, 11 Jun 1907, Tue, Page 6 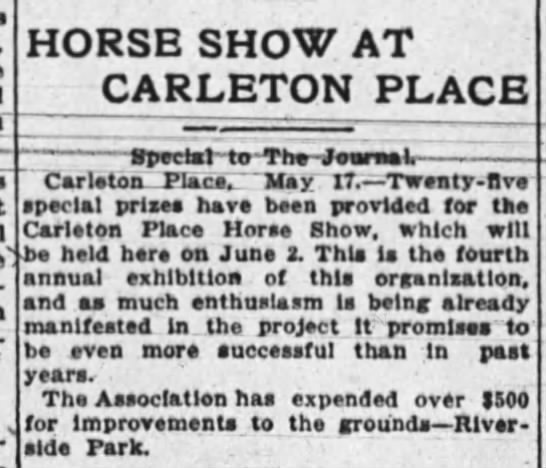 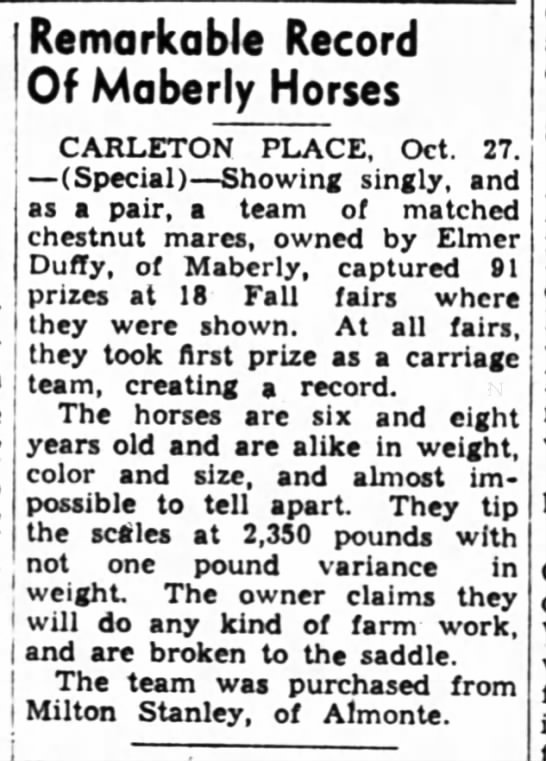