During the past week the residents of Fitzroy Township and neighbourhood have had a sensation in the mysterious disappearance of a young man named Adam Symes, under the most extraordinary circumstances, on the night of his marriage.

It has already been published in Tuesday newspaper that the wedding took place on the evening of New Year’s Day ; but this is a mistake. The ceremony was performed on Monday of last week, the 6th day of January. The bride was an estimable young lady of Carleton Place, named Miss Jennie Graham.

Adam Symes was about 24 years of age, well educated, and in comfortable circumstances. The wedding-party broke up at a comparatively early hour, aud the parties left the house and retired at about 11 o’clock. An aunt and a sister of Symes were stopping at the place at the time.

Between 2 and 3 o’clock Tuesday morning, young Symes got up, partially dressed himself, and went out, not again returning. The wife was naturally alarmed, as well as his relatives, at the mysterious disappearance. Search was instituted during Tuesday and following days; but the only thing that could be found was footprints leading from the gate straight across some fields to the railway-track, about a mile distant.

The Waba Creek ran quite close to where the footsteps terminated at the railway-track, and it was thought Symes might have committed suicide by drowning himself for some unexplained reason, the creek being open at that point, owing to the swift current. Why the young man should have acted in such a strange manner on the night of his wedding, in getting up and going away, with only part of his clothing on, was a mystery which could only be explained in two ways:

He had either got up in a fit of confusion and gone where something had happened to him, or else he had become insane and was not responsible for his actions. Subsequent events have proved that the latter was the case, for he was found at a small hotel at Chats Rapids. He could give no account of himself, and no one knew who he was. He has been brought to his home, aud is now a lunatic, knowing no one, not even recognizing his wife or his most intimate friends.

He positively refuses to eat anything, and, if he has his own way, will starve to death. For some days previous to Symes’ marriage the hired man had noticed symptoms of insanity upon him. It appears that a few years ago his father committed suicide by drowning while laboring under a lit of temporary insanity. 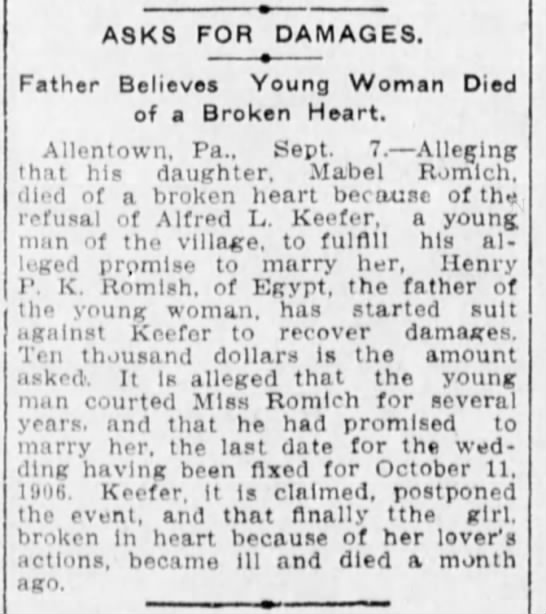 The Runaway Bridesmaid From Rosebank to Huntley