It’s 2 am and I cannot sleep. I lie in bed after an emotional day tossing and turning and clutching the dainty necklace around my neck. It’s the only thing I have left besides 6 photographs that remind me of my late sister Robin. For months I have been putting off writing about what this necklace means to me and decided there is no time like the present.

My sister Robin Knight Nutbrown and Bonny Dover Burton were born on the same day in the Brome Missisquoi Hospital on January 28 of 1956. Our mothers were friends and her mum thought it would be nice if the two girls had matching necklaces. Through the years of sickness and family upheaval Robin must have misplaced hers, but Bonny still had hers and after 62 years she sent it to me.The gold necklace still glistens and the garnet is in great condition, so I knew that Mrs. Dover must have bought these necklaces at the local jewellers and not the five and dime. I wear it at least once a week because it helps me remember the good times and not dwell on the bad.

Robin and I were as different as night and day. Five and a half years between us she was the sporty gal, the equestrian rider, and I was the book worm, the dreamer and the writer. Robin wore great classic clothes and was thin and I was the chubby one and made all my own crazy clothes. She finished school and married the nice Anglican boy and had 2.3 children and I left home at age 15 ½ and became a fashion designer in Montreal. She was my father’s delight and I was my father’s disappointment. Different as night and day, but we shared a past that no child wants to grow up in.

When my Mother passed away, I was 12 and my sister was 6 and a half. We were at home alone a lot due to my father’s civic duties and as my psychiatrist at 18 told me I never had a childhood because I had to look after my sister. That was a textbook diagnosis, but I would like to think it made us stronger. We both grew up with strong wills, street smarts and survived just like that necklace. 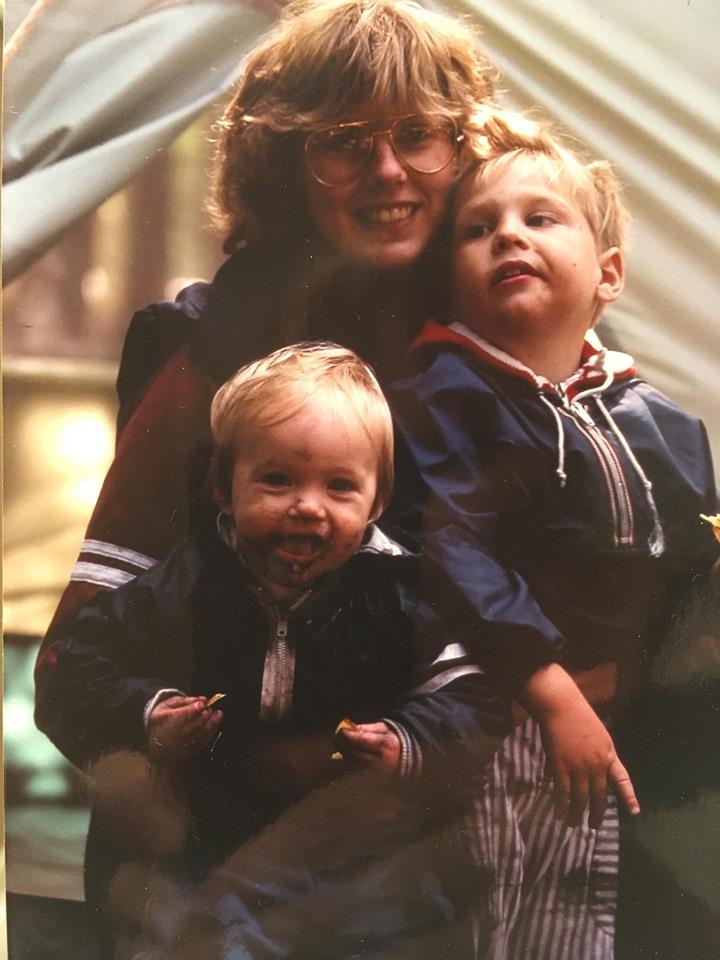 I protested the Viet Nam War and computers, professors and  discrimination at Sir George William University in Montreal during 1968. Meanwhile my sister survived back home and longed to get out on her own. Later on in life Robin fought everyone in Belleville, Ont. to mainstream her autistic oldest son, and even though hindered at each corner; she became a trailblazer for those in her area with special needs children. She refused to segregate her oldest son who was autistic and forced the school board to hire an extra teacher so her child could go to a normal school.  Robin never assumed everything was okay just because others were telling her that, and she volunteered each chance she could to monitor her son’s progress. Unlike some of the people she fought, her family was able to find the beauty and joy in Adam’s differences and he thrived. Because of the dedication of my sister, my nephew enjoyed school, graduated 1000 Islands Secondary School, and went to Boy Scouts for many years. He travelled to Alaska in later years with a local group and has held part time jobs where he is loved.

Sometimes I wish I had this necklace when I saw that she was dying from cancer years ago at age 40. But like the shiny red jewel strung onto this necklace she was too  proud to ever be anyone’s conquest, even cancer, and she valiantly fought it to the finish. Robin was  connected to me, no matter how different we both were. No matter how hard life was for us we did not run away from the struggle, we accepted it as it comes with all the handicaps and injustices.  I am the last one left now, and each day I am living for the moment. But thanks to Bonny I am walking around with a memory of her, a necklace of hope, an armour of sanity. But, at the end of the day, it has to come off– but no matter if the necklace is on or off– the love is still there and Robin, you will always be in my heart.

Thanks Bonny for the necklace.