The former Campbell Woolen Mill building originally was built in 1872 as the Almonte Furniture Com­pany by Messrs. Kirby and Bennett and was known locally as the Kir­Ben Building. In September of 1876 The Almonte Furniture Factory had a large fire and the town wanted it to be rebuilt even if it was thought due to indifferent management and heavy loss the furniture factory would have to close down. The shares in the company were so low that shareholders were willing going to dispose them for 30 cents on the dollar.
It may well be imagined then that the fire left little hope remaining of the factory ever regaining its proper basis. Not so, however, for the fire seems to have aroused the business men of the place to the necessity. If Almonte was still to retain the proud name of being the “Canadian Manchester,” then rebuilding the furniture factory had to be done. A meeting was held to consider the propriety of  submitting a by-law to the ratepayers of the  municipality granting a bonus of  $10,000 to the company, who would rebuild. Various offers were also made by private individuals which one would have thought might induce capitalists to invest in Almonte.
Major Gemmil offered a piece of his ground free, and would even build the factory, providing the company would lease it. Mr. Robert McFarlane also offered an acre of land conveniently situated to the B & O. R. Mr. John Mcintosh offered a piece of land of about five acres, also near the railway, but unfortunately without the Corporation limits, and rather far from the town. It was immediately seen that there were fair prospects for a rebuilding of the factory.
The losses were about $10,000, the Furniture Company being the losers to the extent of $30,000, all the other losses do not amount to $10,000, and so far as known now there is a total amount of insurance to cover this of $7,100. Stocks that in the first place were thought to be so damaged as to be worth nothing have turned out to be worth considerable, with the exception of the cabinet factory the losses were very light.
The people of Almonte said they owed a debt of gratitude to the fire companies of Arnprior, Carleton Place and Smith’s Falls for their prompt aid.  The “burnt out ones” resumed business in various parts of the town. The Furniture Company opened an office in the Dominion Block. J. M. Munro on Bridge Street and John Ferguson went to Forgie’s building, quite close to his old stand.
Sept 1876 Almonte– Gazette Rodgers and Porteous

EPILOGUE– So what happened to the Almonte Furniture Company?

2- 1880- Ratepayers complained and the rest was history

Recently, Marjorie Campbell, a resident of Almonte, donated a painting of the Campbell Woolen Mill to the Mississippi Valley Textile Museum. The picture was painted at the request of Marjorie Campbell by Mr. D. R. Faire in 1979 from a photograph taken in the 1920’s. It was a gift for her husband Donald M. Campbell whose father had owned the mill. The picture had, hung in Mrs. Campbell’s living room for many hears, but she felt the picture and the story of the Campbell Mill should be hanging in the Mississippi Valley Textile Museum as a reminder of when Almonte was the center of Woolen manufacturing in Canada.

The Campbell Mill was located at ‘the south-east end of Water Street, next to the C.P.R. tracks, where Brian Drynan now has his automo­tive repair shop. It was the only local mill that was located away from the Mississippi River, the source of power for all early mills. It was one of the earliest mills driven by steam power.

The building originally was built in 1872 as the Almonte Furniture Com­pany by Messrs. Kirby and Bennett and was known locally as the Kir­Ben Building. The factory operated for many years, then had financial problems. In 1887, James H. Wylie, who owned other mills in Almonte, installed a one set flannel mill in the building, added two more sets over the next two years, and called it the Elmdale Flannel Mills. In March, 1919, Mr. P. J. Campbell of the Blakeney Woolen Company purchased the Kir-Ben building and started moving the looms and other machinery from Blakeney to the Kir­Ben building to produce flannels.

In March, 1928, a Saturday fire heavily damaged the building. The Almonte Gazette. reported that “spontaneous combustion in the dryer room’ was suspected as the cause. “An alarm was I given and the fire brigade did effective work and succeeded in confining the blaze to one department.” The damage amounted to $12,000. Later in 1928, the picture of the Kir-Ben building was printed in The Almonte Gazette with the following report below it.

“Campbell Woolen Company’s Mill at Almonte which was destroyed by fire in a Monday midnight conflagration. The loss is estimated by P. J. Campbell at $50,000, partially covered by in­surance.” The Campbell Woolen Mill ceased operations, the remainder of the building was demolished i and the Company was closed a few years later.

I wondered whether there was any evidence left of the old Campbell Mill so I drove down Water Street to Brian Drynan’s Garage. Brian had found considerable evidence of the Campbell Mill while building his garage, house and other structures. The railroad siding to the Mill is still in place. He found stone foundation walls; a six inch cast iron pipe from the river to the Mill, thought to bring water from the river; and two large concrete slabs, one now serving as a base for propane tanks. And bricks’ lots of bricks. Brian remembers the bricks had markings on them and was told they were made in Almonte. He will try to find some of the old bricks for the museum. I am not aware of a brick factory in Almonte.

and I found this today– Linda S 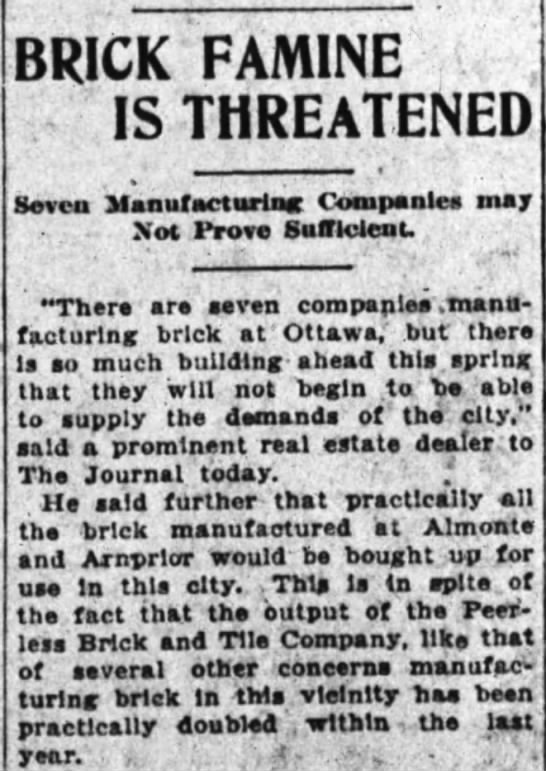