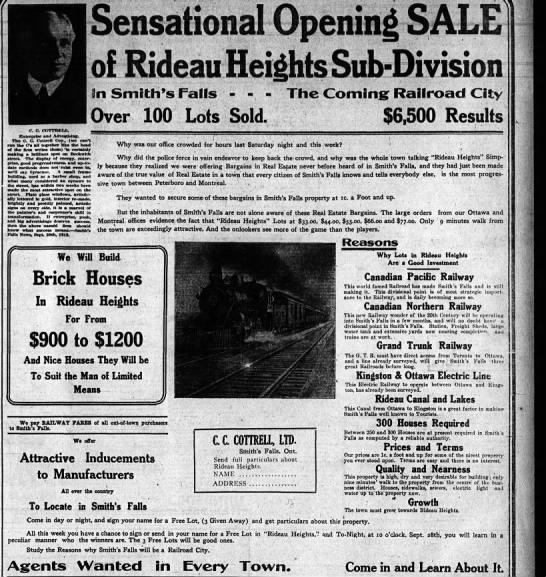 Study the Reasons why Smith’s Falls will be a Railroad City. Agents Wanted in Every Town. Come in and Learn About It.

Why was our office crowded for hours last Saturday night and this week?  Why did the police force in vain endeavour to keep back the. crowd, and why was the whole town talking “Rideau Heights”.

Simply because they realized we were offering bargains in Real Estate never before heard of in Smith’s Falls, and they had just been made aware of the true value of Real Estate in a town that every citizen of Smith’s Falls knows and tells everybody else, is the most progressive town between Peterboro and Montreal.

They wanted to secure some of these bargains in Smith’s Falls property  for the inhabitants of Smith’s Falls, but they were not alone aware of these Real Estate bargains. The large orders from Ottawa and Montreal were evidence to the fact that “Rideau Heights” lots at $33.00, $44.00, $55.00, $66.00 and $77.00.  Rideau Heights was after all only nine minutes’ walk to the property from the centre of the business district.

They offered brick houses in Rideau Heights in the price range of $900 to $1200. A new railway wonder of the 20th Century would be operating in a few months Smith’s Falls  would have three great Railroads before long and the  Kingston & Ottawa Electric Line and was just surveyed to operate between Ottawa and Kingston.

It was some of the nicest property you ever stood upon they said. Terms were easy and there was no interest. Quality and Nearness This property is high, dry and very desirable for building with sidewalks, sewers, electric light and water up to “the property now. 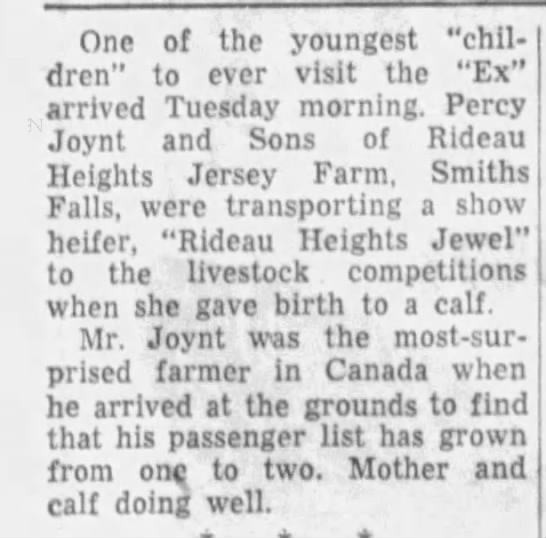 Smiths Falls Woman Built House With Her Own Hands — McNeil