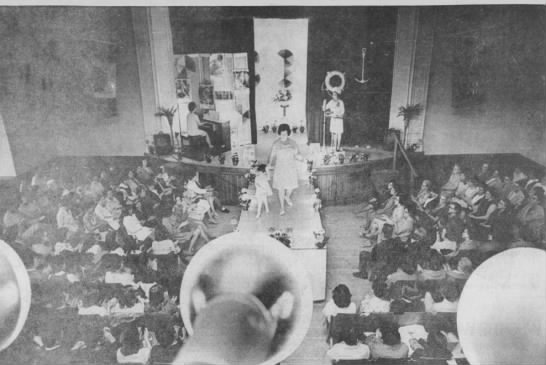 Preparation for the show starts early. There’s cutting, stitching and seaming by those interested in the sew-at-home segment of the show, ticket selling, advertising and baking for the refreshment break. But at least one model didn’t worry too much about an early start. “I didn’t start my dress until eight o’clock last night,” said Mrs. John Ritchie, wife of a Carleton Place town councillor, the night of the show. But she was ready to glide down the runway in her navy sheath when her turn came.

The 14 models including Joan Baker, Miss Carleton Place, were wives and daughters of citizens of the town. “We’ve one imported model, Mrs. Rolf Bach of Almonte,” said co-ordinator Mary Cook. “What counts is not who you are but what your figure is because we show fashions from size 3 to 241/2” she explained.

Makeup artist Heather Bennett called in reinforcements from Ottawa to help her with cosmetic duties at the old town hall. In spite of inadequate light and cramped quarters, the three women had the models ready for the runway on time. And there was a packed house. More than 600 tickets had been sold to townspeople as well as friends in Ottawa, Kingston and surrounding towns.

The audience started to arrive at seven for the eight o’clock show. The town hall balcony was full, the main auditorium was full and it was standing room only at the back and along side aisles. Then with pencils and paper at the ready to copy pattern numbers and prices during the opening sew-at-home sequence, the audience watched rapt as small models, one only 20-months-old, walked hesitantly down the ramp. 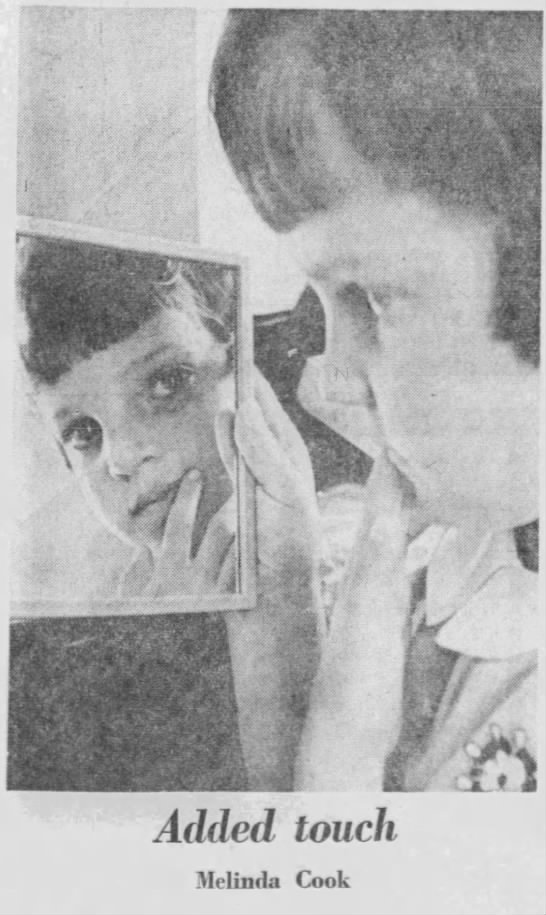 One 5-year-old girl in bikini and beach coat decided modesty was the better part of modelling and refused to remove her coat even when asked to do it “just for fun”. Then it was on to high fashion with Miss Carleton Place setting the pace in a flowing, colorful pants dress. Dressers the LA members were busy stripping and dressing the models who presented 93 changes during the two-and-a-half hour show. “One of the models had just 14 seconds to change for her next appearance,” Mrs. Cook said. Finally the last outfit was shown, coffee was served and the 10th community fashion show was part of Carleton Place history. A summer of safe fun at the beach was assured.

Photo of Mindy Merkley-Melinda Cook above ( aka Mary Cook’s daughter) Her memory today of the fashion shows she helped her mum with. Thank you Mindy!
“I can’t remember the number of times I walked that runway as a child. Mom always managed to find a way to make us cooperate to participate in those shows. I can still remember that slanted floor of the stage and the changes rooms we had in the back. There were many times I’d be running around in just my underwear looking for my next dress or outfit to wear. We used to have The Red Room on the second floor of our store where mom would have us practice before the fashion shows. We called it The Red Room because it had plush red carpet. She used to hold her deportment classes there and mock fashion shows for the girls in the classes. She would also hold small fashion shows there for customers when new styles of clothing came into the store. The second floor was loaded with ladies and children’s wear. When we were kids, and both mom and dad worked at the store, they’d hire Honey Blaine to babysit us at the store. I remember playing hide and seek among the hundreds of hanging dresses and crawling into display cases. You’ve brought back some fantastic memories Linda. Thanks for the gift.” NO thank you Mindy for sending this..:)

You Better Work it Girl! Cover Girls of Carleton Place 1965

Miss Civitan Club 1976? Who Are These Women?