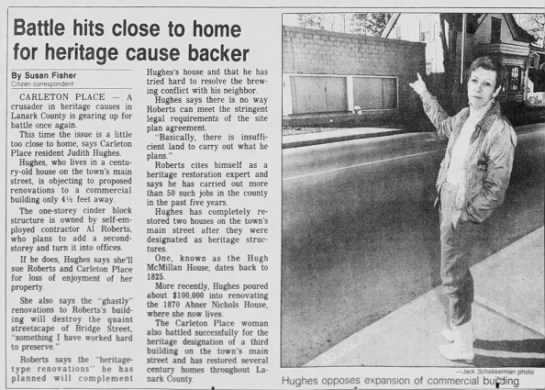 CARLETON PLACE – A crusader in heritage causes in Lanark County is gearing up for battle once again. This time the issue is a little too close to home, says Carleton Place resident Judith Hughes. Hughes, who lives in a century-old house on the town’s main street, is objecting to proposed renovations to a commercial building only 4  feet away.

The one-storey cinder block structure is owned by self-employed contractor Al Roberts, who plans to add a second-storey and turn it into offices. If he does, Hughes says she’ll sue Roberts and Carleton Place for loss of enjoyment of her property. She also says the “ghastly” renovations to Roberts’s building will destroy the quaint streetscape of Bridge Street, “something I have worked hard to preserve ” Roberts says the “heritage-type renovations” he has planned will complement Hughes’s house and that he has tried hard to resolve the brewing conflict with his neighbour.

Hughes says there is no way Roberts can meet the stringent legal requirements of the site plan agreement. “Basically, there is insufficient land to carry out what he plans.” Roberts cites himself as a heritage restoration expert and says he has carried out more than 50 such jobs in the county in the past five years.

Hughes has completely restored two houses on the town’s main street after they were designated as heritage structures. One, known as the Hugh McMillan House, dates back to 1825. More recently, Hughes poured about $100,000 into renovating the 1870 Abner Nichols House, where she now lives. The Carleton Place woman also battled successfully for the heritage designation of a third building on the town’s main street ( Levine) and has restored several century homes throughout Lanark County.

The Day The Moose in Carleton Place Burned Down