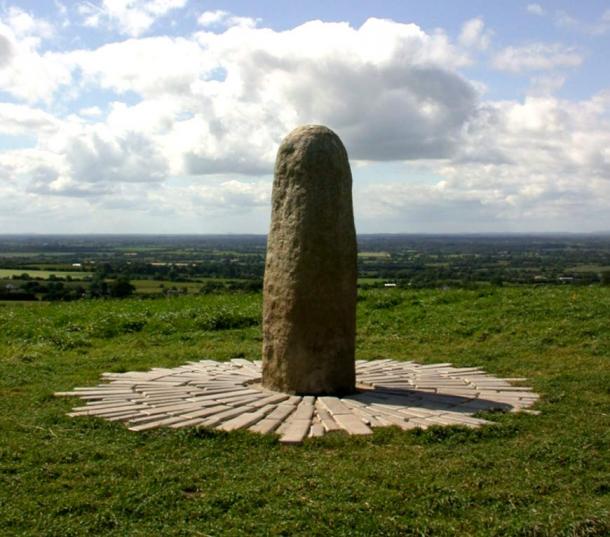 The Lia Fáil (Stone of Destiny) atop the Hill of Tara, County Meath, Ireland.

Celtic Historian Kevin Dooley came to the reunion to tell the Mahon families what their ancestors went through.  He also told us a few settlements in Ireland were older than Sonehenge carvings in the Irish stones —older than the pyramids. When ancient Egypt and Ireland are spoken about in the same breath it usually results in the rolling of eyes, polite exits and the sound of murmurs citing pseudo-history and new age babble. At least, that used to be the case.

Recent discoveries in DNA research have added to already verified archaeological finds to present a scenario that is now more difficult to dismiss.

The Hill of Tara is one of Ireland’s most ancient sacred sites. It is surrounded by many other Neolithic earthworks and tombs and although commonly associated with the Celts, the site pre-dates their arrival in Ireland by thousands of years.

In legend it is the place where the Tuatha De Danann reigned. These were a God-like people who were said to have arrived in Ireland in mysterious ships and had magical powers. Read more here..

Here we have a portrait of Mary and Evelyn Mahon, daughters of John and Bridget Mahon, taken in the early 1900’s.

The Mahon family is one of the oldest families that immigrated from the centre of Ireland and James Mahon’s small farm was located just outside of town.  They were also a clan and had lands and had trades.

This stage of Irish-Canadian immigration history gathered momentum in the 1760s when advertisements appeared in Ireland’s Ulster province offering “industrious farmers and useful mechanics” the opportunity to emigrate to British North America (as Canada was then known) with the promise of at least 200 acres of land per household.

Some 300 new settlers took up the challenge, arriving in Halifax, and the following year they were joined by 170 immigrants who sailed from Londonderry and settled the New Dublin area.

Another sizeable group of Irish immigrants arrived in 1823-1825. Mainly Catholic paupers from counties Clare, Cork and Limerick, they created a 2000-strong settlement in Peterborough, Ontario (named after Peter Robinson who commissioned the twelve ships that carried them).

Each household was given a cow, basic implements and three bushels of seed potato to get them started on a new life.

This, too, was successful, and was followed by several years of active emigration, principally from Britain (which then included Ireland). In 1831 alone, 34,000 Irish immigrants arrived in Quebec. Even though they now had freedom of religion some of the Catholic immigrants changed their religion to get land and a lot of Catholic settlers were placed on the provincial lines to keep the Quebec french settlers out.

It was also to become the setting of the most tragic events in Canadian immigration history: the arrival of thousands of sick and dying Irish immigrants fleeing the famine that gripped Ireland in the late 1840s. Some of them barely survived the harsh Canadian winters.

In 1846, an estimated 33,000 people of all nationalities landed at Grosse Isle. The following year the number rose to 84,500. Nearly 70% were Irish and many suffered from what they called ‘ship fever’.

It was actually typhus but it’s hardly surprising they blamed their illness on the boats they arrived in, for conditions on board were horrendous and perfect for disease to spread. About one-sixth of Irish passengers died during their voyage or shortly after landing. No wonder the immigration ships from Ireland became known as ‘coffin ships’.

But the illness wasn’t confined to the ships. Grosse Isle was also hopelessly underfunded to cope with such an influx, sick or not.

Accommodation was woefully inadequate and medical provision was insufficient. Inevitably, the disease spread among the supposedly healthy. Doctors, nurses, priests and even the Mayor of Montreal died alongside the immigrants.

As news of the 1846-47 tragedy spread, those Irish emigrants who could afford it, preferred to immigrate to the United States rather than Canada. This wasn’t an option for all immigrants, of course.

A Cross for the Irish who Perished on the St. Lawrence Shores

Who is Kevin Dooley

Kevin Dooley was born in Ireland, has worked as a machinist, seaman and marine engineer, has lived in Ottawa for nearly 40 years.

“I have spoken to no one who understands why it turned into the fight that it did,” says Dooley, who will forever speak in the deep, burling and rolling accent of his native country. “Everyone thought it was such the obvious thing to do.” Read more here…

I first met Kevin Dooley in the 90s through some musical friends who were also
in Ottawa’s Celtic music community, and often joined the Irish session
Kevin led at Daniel O’Connell’s Pub Thursday nights. In 2003 Kevin got a
nasty letter from SOCAN about copyright license fees for that session he
hosted. It was sent to him in error; the matter of license fees was
between SOCAN and the pub owner, and was not Kevin’s responsibility. The
whole thing went away, but if you know Kevin, the idea of SOCAN telling
Kevin (of all people!) “Ahem, we license the world’s repertoire of
music” was the height of irony.

It was so ironic, in fact, that it raised the ghost of Phil Ochs (known
for his strong sense of irony) who came to me while I was doing grocery
shopping on a Saturday afternoon.

He said “Jaan, I’ve got some new lyrics for an old song of mine” and whispered them to me.

I rushed home with only half the stuff I was supposed to buy, fired up my computer and
wrote them all down. That’s how “The Ballad of Kevin Dooley” was written.

I’ve clipped the 2003 Citizen story on Dooley and SOCAN here:

And I’ve attached my PDF with lyrics and chords.

Jaan said that he did this tongue in cheek. I knew it was a misunderstanding that was not going to be a problem for Kevin. When I perform the song, I usually say that Charlie actually *did* get off the MTA without much trouble, but the Kingston Trio had a hit with that song anyway ;)” Kevin has  heard me do it a few times, and for a short time a copy of the lyrics was displayed at Daniel O’Connell’s.

In its ancient Gaelic form, the Irish name Mahon was written Mac Mathghamhna, which later became Mac Mathuna. Both names are derived from the word “mathghamhan,” which means “bear.”

Early Origins of the Mahon family

The surname Mahon was first found in County Clare (Irish: An Clár) located on the west coast of Ireland in the province of Munster, where the MacMahons were lords of Corca Baisgin; and possessed the greater part of the baronies of Moyarta and Clonderlaw.

Early History of the Mahon family

Many variations of the name Mahon were found in archives from the Middle Ages. These variations can be somewhat explained by the challenge of translation of Gaelic names into English. Hence, the spelling and language in which the people’s names were recorded was often up to the individual scribe. Variations of the name Mahon found include MacMahon, MacMann, MacMahan, MacMohan and others.

Notable amongst the family name at this time was Séamus mac Pilib Mac Mathghamhna (died 1519), was Bishop of Derry. Hugh Oge MacMahon (1606-1644), was an Irish conspirator, was probably of Sir Brian MacHugh Oge MacMahon, Lord of the Dartree in the county of Monaghan. Herber MacMahon (1600-1650), Bishop of Clogher in 1643, a Catholic leader, commanded the Ulster…

Migration of the Mahon family to the New World and Oceana

Irish families began leaving their homeland for North America in the late 18th century. These families were usually modestly well off, but they were looking forward to owning and working on a sizable tract of land of their own. This pattern of emigration continued until the 1840s when the Great Potato Famine sparked a major exodus of destitute and desperate Irish people. These people were not leaving for a grant of land in North America because by this time the East Coast had reached its saturation point and free land was scarce. They were merely looking to escape the disease, starvation, and hopelessness that Ireland had fallen into. Although these unfortunate immigrants did not receive a warm welcome by the established populations in the United States and what would become Canada, they were absolutely critical to the rapid development that these two nations enjoyed. They would help populate the western lands and provide the cheap labor required for a rapid industrialization. An examination of passenger and immigration lists has revealed many early bearers of the name Mahon or one of its variants:

Mahon Settlers in Canada in the 19th Century

Mahon Settlers in United States in the 18th Century

Mahon Settlers in United States in the 19th Century

Mahon Settlers in Australia in the 19th Century

Mahon Settlers in New Zealand in the 19th Century

Declan Barron
in the section ‘Contemporary notables of the name Mahon (post 1700)’ James Patrick ‘The O’Gorman’ Mahon is listed as Charles. This is an error made by the Oxford Dictionary of National Biography in the 1890s that has recently been corrected.

Historic Events for the Mahon family

The motto was originally a war cry or slogan. Mottoes first began to be shown with arms in the 14th and 15th centuries, but were not in general use until the 17th century. Thus the oldest coats of arms generally do not include a motto. Mottoes seldom form part of the grant of arms: Under most heraldic authorities, a motto is an optional component of the coat of arms, and can be added to or changed at will; many families have chosen not to display a motto.

Stay tuned for more as:

All are welcome in this place.

From Dublin to Drummond- Mahon Family Reunion — The Series –Part 1

From Dublin to Drummond- Mahon Family Reunion — The Series –Part 2

From Dublin to Drummond- Mahon Family Reunion — The Series –Part 3

From Dublin to Drummond- Mahon Family Reunion — The Series –Part 4 — The Family Photograph!!!!