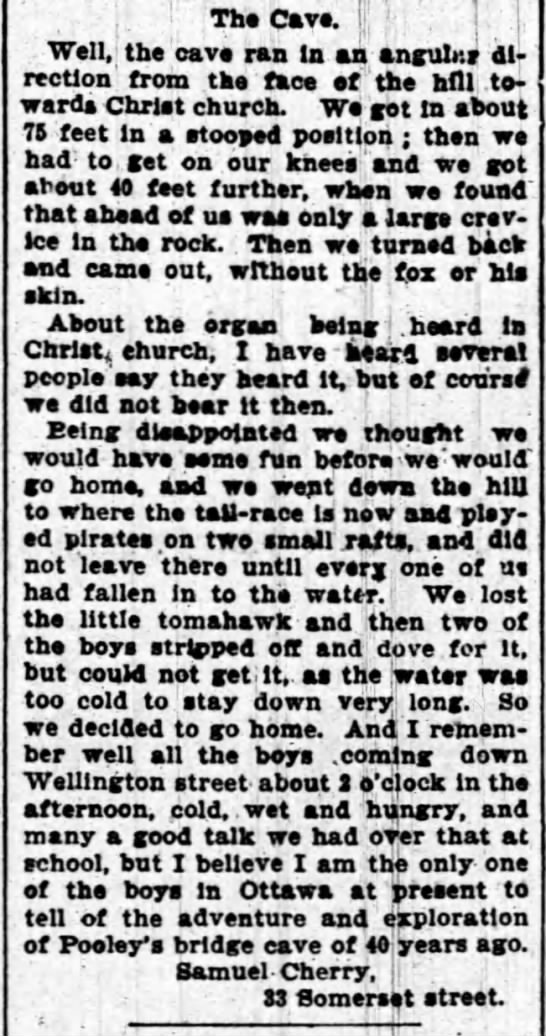 The following text is taken from the Wikipedia site concerning LeBreton Flats.

“Pooley’s Bridge, Ottawa’s oldest bridge, is a stone arch bicycle/pedestrian bridge located in Ottawa’s LeBreton Flats east of the Canadian War Museum and south of the Portage Bridge. The three span closed spandrel stone arch structure, built in 1873, was designated as a heritage structure by the City of Ottawa in 1994. It is located beside the Fleet Street Pumping Station (Ottawa’s original water works) at the end of Fleet Street.

“The bridge is located at 9 Fleet Street, at the southwest edge of Bronson Park. It is very near and southeast of LeBreton Flats’ first new condo unit. It is south (but beyond some grassy area) of where Wellington Street meets the Portage Bridge. The city describes it as “over the channel tailrace of the Fleet Street Pumping Station”. The City waterworks building, including the pumping station and the aqueduct were designated as heritage in 1982 under the Part IV of the Ontario Heritage Act.

“Pooley’s Bridge is one of six stone arch bridges in the Lebreton Flats, all built circa 1873, all are Heritage Bridges and all are designated to serve as pedestrian/bicycle facilities only. The five other bridges are all single span stone arch bridges over the aqueduct, west of Pooley’s Bridge. They are: Canada Central Railway Bridge, Broad Street Bridge, Lloyd Street Bridge, Grand Trunk Railway Bridge and Lett Street Bridge. The first bridge is owned by the National Capital Commission, second, third and fifth by the City of Ottawa and the fourth bridge is under the Region’s ownership. The third, fourth and fifth bridges are connected together.

“The condition of Pooley’s Bridge has been of concern for a number of years. It was necessary to undertake the controlled removal operations on the bridge in 1994, to ensure public safety. Due to anticipated failures, it was necessary in 1999, for the City of Ottawa to file an Application to Alter and make repairs to five other stone arch bridges in the area. The repairs required at the five stone arch bridges were relatively minor, but expensive.”