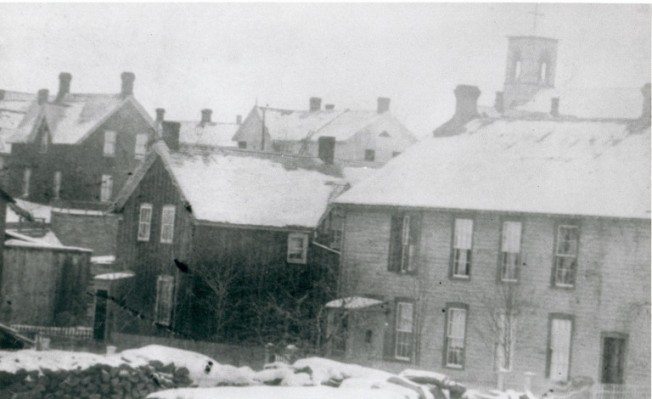 Some of the old time readers of the Gazette complain occasionally with a good deal of reason, that the town has changed so much they can recognize comparatively few of the names. But they are very patient,  at least retain their  interest in the columns of 50 and 25 years ago; and in odd stories contributed by Mr. Dugald Campbell of Vancouver or Mr. Alex Currie of Winnipeg.

Having their case in mind, the present publisher thought he might write a short story on what he considers a funny incident that happened in Almonte a good many years ago – an incident that shows young boys were just as bad rascals then as they are in our day.

It appears that the late “Mr. John Kelly, a stone mason and cattle drover, decided he would go into the hotel business on the side. So he rented the Commercial House toward the lower end of Mill Street, from J. K. (King) Cole who resided in a frame residence on Farm Street, immediate behind the hostelry which he had conducted for so many years and now turned over to Mr. Kelly.

Needless to say both elderly gentlemen were great friends and visited together on frequent occasions. Mr. Kelly had three sons, all of them now deceased: Dr. J. K., a physician; R. N., a druggist and William G. who for many years was secretary-treasurer of the Public Utilities Commission. It is to the latter, with his rather good sense of humor and fondness for reminiscence, that we owe the tale, we are about to unfold.

Before we tell what happened it should be recalled in those days target practice on the       rifle ranges was a great sport among middle aged men–much more popular with them than golf is today.

Among the outstanding marksmen were Dr. A. A. Metcalfe, James McLeod of the Gazette,

Nelson Washburn, Henry Brown, Bobbie McDonald, H. H. Cole and  at an earlier time the latter’s father, King Cole, who was best of all. King Cole was such a good man with a rifle that he made the Bisley Team at least once and, maybe twice. At any rate he was presented with a gold headed cane by his fellow citizens as a testimonial , to his prowess on the ranges.

And now we will proceed to tell the humiliating fate that befell King Cole, his knight in shining armour with a rifle.

He came over to visit John  one day and the two sat on a convenient bench behind the Commercial House. They observed a swarm of rats making merry around garbage receptacles about 50 feet away and Mr. Cole announced he could pick them off in short order if only he had a rifle.

Young Dick (R. N.) was standing in a doorway behind the  old boys and he suggested they both indulge in target practice as there were two .22 rifles in the summer kitchen.

“Very well, boy.” said the King, “bring them along and you load them.”

Dick might have said like Lucy Gray in Wordworth’s poem when asked to go to the village on a shopping tour: “that father will I gladly do, “ because there was nothing he wanted more than to be appointed loader up for the two marksmen.

He slipped a cartridge in each of the rifles and handed one to King Cole and the other to Pappa Kelly. Both took aim and, horror of horrors! Mr. Kelly who had never gained any great reputation as a marksman got his rat while the one Mr. Cole aimed at didn’t even budge.

King looked surprised but both of the elderly gentlemen handed back their rifles to young Dick to be reloaded.

And the same thing happened again. In fact it happened over and over again until King Cole exclaimed:

“Well that is the strangest thing I ever saw: my rifle must be no good.”

“Well, why don’t you trade rifles, “  suggested young Dick. And so they did. But King Cole’s luck got no better and his face got redder and redder.

Finally, when Dick handed them the rifles Mr. Cole smelled a rat even though he couldn’t shoot one. He pulled back the bolt in the .22 and he found that there was no bullet in his cartridge. It was tamped full of cotton batting. In other words he had been using blanks all this time.

Turning quickly he caught young Dick with a pair of pinchers in the act of extracting another bullet from a cartridge which was undoubtedly intended for that rifle.

It could not be said of him:

“A merry old soul was he:

It could be said though:

“He called for his gun and aimed at a rat

“But the rat only laughed with glee.”

Mr. Kelly had not been in on the game and didn’t realize why his old friend stumped off so angrily muttering that there were a few young pups around Almonte that were worse than rats.

When John Kelly found out the score instead of disciplining his inventive son he handed him five cents and laughed uproariously. Five cents was five cents in those days which made up for the scowls Mr. Cole aimed at is youthful tormenter for a week. After that he forgave him but it was said that J. K. Cole always loaded his own gun at future target practices.

Mr. Cole was paternal grandfather of Benson of Ottawa.

He was also Mr. R. A. Jamieson’s maternal grandfather. We defy this barrister to sue us for libel on this one because he would have an awful time serving the immediate witnesses with summons unless he equips himself with wings.

When Pigs Fly or Bacon Up is Hard to Do