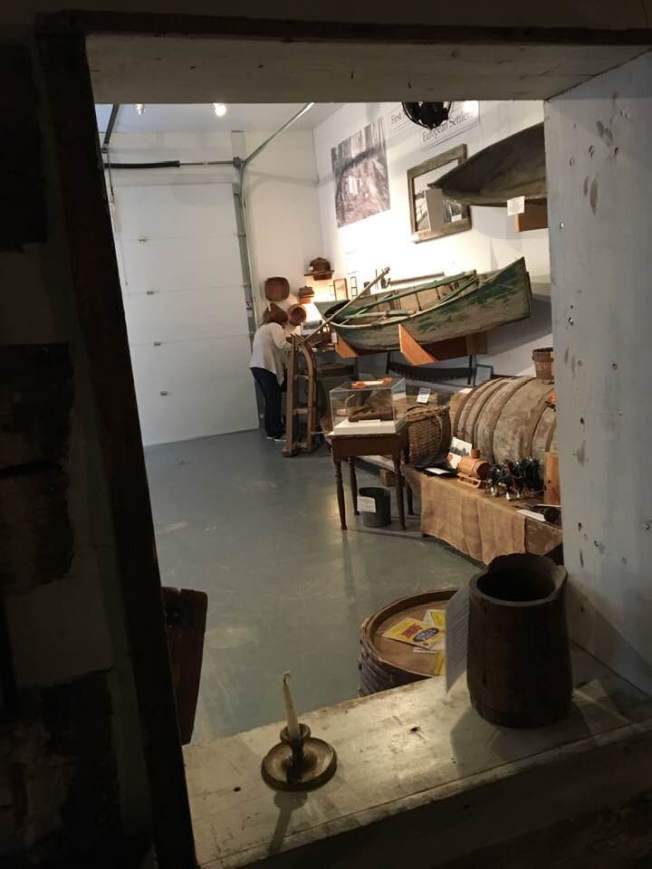 The Baye’s Of Lanark Township.

Excerpts from the Almonte Gazette Newspaper;

With regards to an article in the book (Ramsay Reflections) recently published dating from 1836-1979 page 41, I beg a small space in your paper.

When I contacted Ramsay Residents I was very surprised to see that the Baye history refers to them as residents of Ramsay Township.

I made it clear at that time, that this was a mistake, and to my knowledge it was changed then.

I have absolutely no fault to finish with the ladies who have written the book I except they used the material as they received it.

However the truth is Joe Baye his wife and family never lived in Ramsay Township.

He may have camped along the river between Almonte and Appleton while trapping etc., but it never was a permanent place of abode.

His property comprised about one acre of land, more or less in the eleventh concession of Lanark Township.

He also had access to about half an acre in the twelfth concession, owned by a neighbour, on which he grew potatoes, corn and other vegetables.

It was known as the (Sand Hill) and he was never molested. This land was ploughed and worked by neighbours, and he was always ready to do a kind act in return.

His house, shop and other buildings were In the eleventh concession, and were always in A-1 condition.

Also the famous (Floating Bridge) which did form part of the twelfth concession just near his home is in Lanark Township.

Other books tell this bridge was first built to get people from Halls Mills and Galbraith to Ferguson Falls. This is quite true as it did separate Taylor’s Lake from Clayton Lake at the narrows, and is one mile west of Ramsay Township.

The bridge before it was destroyed was 300 yards long.

As I said before, I have no fault to find with the ladies, who no doubt have spent many hours preparing the book. I would say a job well done.

No doubt this article was printed as received, and was taken as a true story to a lot of people.

However like all my neighbours, who remember what fine people the Baye’s were that this part of the community, and especially the town of Almonte, join with me in remembering them as residents of Lanark Township.

ps. The following is in no way connected with the foregoing article.

I see pictures of the Floating Bridge in several places bearing a date of 1890.

While it is a good picture of the bridge, the date is absolutely wrong.

First it shows the telephone line. We didn’t have telephones in these parts in 1890. I think 1910 is closer to the correct date.

Also as to the railing on the bridge. My neighbours and myself, helped build the railing shown, and it could be the last one before the bridge was closed in 1944. It could be in the (thirties) with wages at 25 cents or 30 cents an hour/

The floating bridge at the narrows between Clayton and Taylor Lakes was actually constructed on the water adapting to the lake’s water levels. It was used by many farmers as a short cut for hauling cord wood and grain to Almonte. Bill McIntosh of RR 6 Perth remembers crossing the bridge in a car when the water would squirt up through the flooring. Advanced transportation caused the demise of the bridge, which was also a popular fishing spot. Joe Baye’s home appears in the far right. This week’s peek is courtesy of Bill Labron who also submitted a letter to the editor (see below) about Joe Baye.

Visiting with Joe Baye near Bridge

Although this story has been told before, I thought it might be suitable to go with the floating bridge on Clayton Lake.

Some time after I migrated to Paris, Ont. with the Penman Company, Mr. Long, Penman’s general superintendent, as me if I knew the Indian fellow Joe Baye who lived near the floating bridge.

I replied that I didn’t know him personally, but I knew of him.

“As you probably know I make periodic inspections of all the Penman Mills. One time in Almonte, manager Herb Lundy asked me if I would like to go fishing.”

“I liked to fish so the next day about 1 pm Herb hired a horse and buggy from the local livery and some time later we arrived at the floating bridge.”

“Joe was going to be our fishing guide in his boat. After we returned from two or three hours of fishing Joe fried some fillets from the fish we caught and we sure enjoyed them.”

“Just about the time we were ready to return to Almonte, a terrible storm came up. As the wind and rain didn’t let up, Joe invited us to spend the night there.”

I wasn’t very keen on that, but Herb thought we should. Later we went up some steps, steep as a stepladder, to a room in the attic where there were two beds.”

“Although the bed was clean and comfortable I could not sleep with the lightning and rain pounding on the roof.”

“Just about daylight I heard someone come up the ladder. Then I could see this Joe Baye fellow’s head and shoulders and a large knife in his hand.”

“Gosh Bill, I was scared. I didn’t know whether to call Herb or what. However, this Joe Baye went over to a rafter and cut down a bundle which was tied there. He went back down the steps apparently carrying some smoked meat.”

“Afterwards I could smell ham and eggs frying and Bill, I don’t know when I enjoyed a breakfast like we had that morning.”

“Bill, I always wanted to go back there again for some fishing, but I never did make it.”

Joe Baye was a well-known Indian who trapped, worked for farmers during their busy season and acted as a fishing and hunting guide. 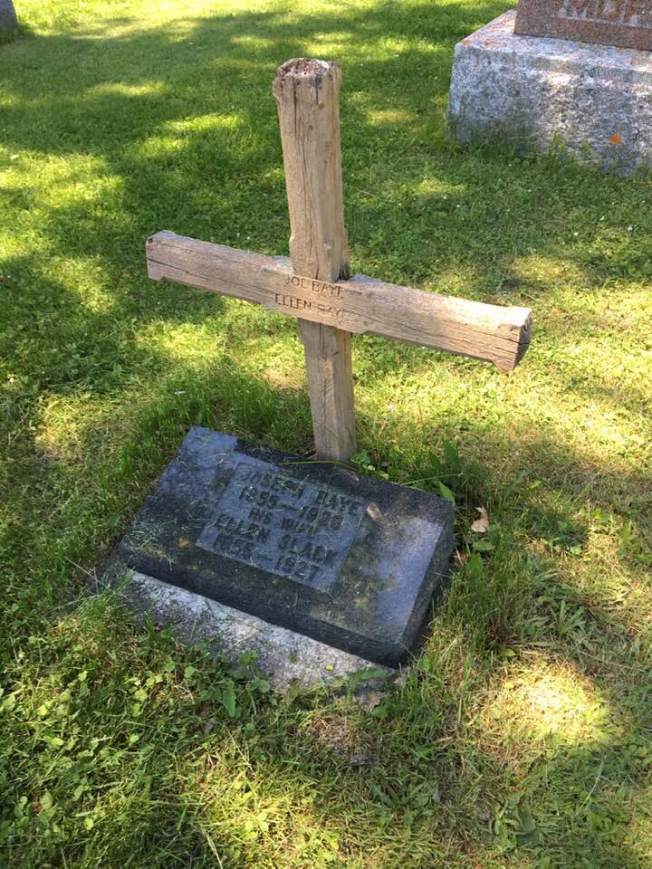 The North Lanark Historical Society completed one of this year’s projects on Sunday with the erection of a marker on the grave of Joe Baye and his wife Ellen. Joe Baye was the last full-blooded Indian to live in this area, and he died 50 years ago. A dedication of the wooden cross/marker was made at the decoration and memorial service held at the Auld Kirk Cemetery last Sunday.

It was fifty years ago that this area’s last full-blooded Indian, Joe Baye, died and was buried beside his wife, Ellen, in Auld Kirk Cemetery.

Last Sunday, the grave was marked with the erection of a cedar cross, completing another of this year’s projects of the North Lanark Historical Society.

Joe Baye, who was born in 1856, lived at the narrows between Clayton Lake and Taylor Lake at the south end of the Floating Bridge. He made his living in the traditional Indian way, by hunting, fishing and trapping. The Baye’s had many friends in the Almonte district and were well-liked and respected.

After the memorial service at the cemetery last Sunday, those present stayed for a dedication of the marker, presided over by Rev. Robert McCrae. On hand for the ceremony was Bill McIlquham of Belleville, who is Joe Baye’s grandson.

Congratulations on the new look of the Gazette which I have read with interest since James Muir was the publisher.

Recent correspondence re: Joe Baye evoked pleasant memories of him and of Mrs. Baye — his horse and buggy, his dog, his friendly home, his shop and his unique style of skill under construction. Rev. J. T. Blanchard a relative of Mrs. Baye told me that at the time of their marriage she was a very beautiful girl and he a very handsome man. In age they were still beautiful people to me.

The Legend Of Big Joe Baye — How Much Do You Know?

More Notes on the Floating Bridge in Clayton

Searching for the Floating Bridge?

The Floating Bridges of Lanark County

The Mystery Ruins and the Floating Sidewalk Near the McNeely Bridge