The real story begins a century earlier, in 1865, when Englishman Henry Brading, 33, settled in Ottawa and opened the parched lumber town’s brewery. ( See Jaan’s comment below) The Union Brewery stood on the lower reach of the escarpment at 451 Wellington St, almost under the morning shad ow of Christ Church Cathedral. Brading bought out his partners in 1880 and renamed the operation Brading Breweries Ltd. He died in 1903 and controlling interest went to Ottawa entrepreneur Charles Magee and his family. In 1930, Magee’s sharp and ambitious 29-year-old Ottawa grandson, Edward Plunkett Taylor, took control of Brading’s and turned it into the cornerstone of a business empire that made Taylor one of the most illustrious Canadian businessmen of the 20th Century.

When the Depression hit, Taylor went on an aggressive buying spree, snapping up dozens of small Ontario breweries which he consolidated and modernized or closed. The conglomerate became Canadian Breweries Ltd., later known as Carling O’Keefe. As Brading’s prospered, hockey sensation Finnigan, one of the original Ottawa Senators, was hired as head of sales after retiring from the Maple Leafs in 1937. Alcoholism derailed the “Shawville Express” and his job with the brewery just three years later.

Then, in 1938, Brading’s uptown land at 451 Wellington St. was expropriated too, this time for the planned beautification of Ottawa. Brading’s continued brewing at the site until 1944, when Taylor relocated the label to 840 Wellington St. and merged it with Capital to become Brading’s Capital Brewery Ltd. (The original brewery at 451 Wellington St. continued to lease the land and operate under Taylor’s O’Keefe label until 1956. The building was demolished in 1960.) The new company embarked on a multi-million dollar plant expansion in late 1945, announcing the $200,000 purchase of the massive International Marine Signal Building directly across Wellington, once touted by some as the longest building in the British Empire.

As part of the plant expansion, Brading’s said a tunnel would be dug under Wellington for the movement of millions of bottles of beer from the plant on the south side to the warehouse on the north side. There was no mention of how that would be accomplished, whether by trolley, conveyor or possibly by a factory train on narrow-gauge tracks. 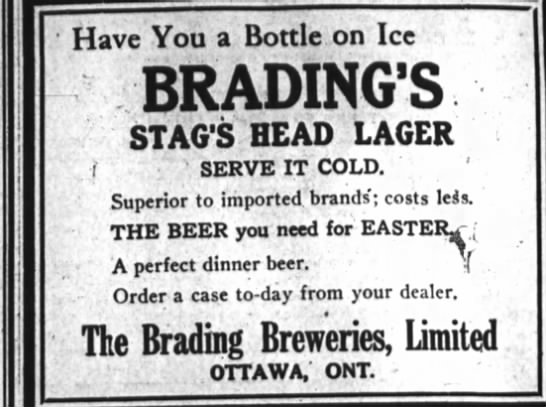 About two years later, on the night of Aug. 13, 1947, Horace Bisson, 44, of Stirling Avenue in Hintonburg, was riding his bicycle east along Wellington, between Preston and Champagne, when he was hit and killed by an oncoming taxi. Cabbie Ross Manning, 21, went on trial for manslaughter. He testified he had just driven through safety barriers at the tunnel construction site when Bisson’s bike veered into his path. The jury acquitted him. 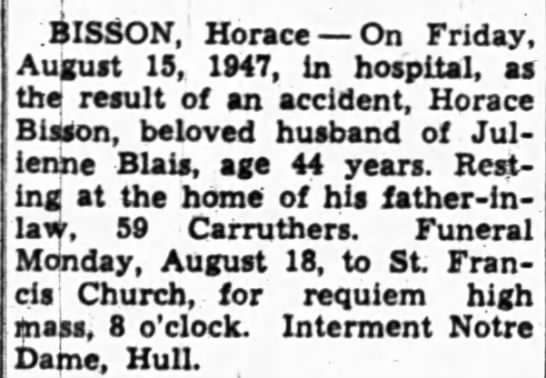 The tunnel, which never again attracted attention, is believed to have operated for many years, with men moving countless cases of Brading’s and Capital lager, ale and port from the plant to the sprawling warehouse, where they were shipped out on trucks. Ron Snow, now 84, worked in the plant’s accounting department from 1951 to 1953. As an office worker, he doesn’t recall the tunnel. But he does remember one of his daily duties was to escort a provincial liquor inspector over to the ware- house, where Canadian Breweries Ltd. stored an ocean of suds, much destined for Montreal.

Snow laughs as he recounts how the inspector was far more interested in consuming beer than counting it. “By the end of the day, this fellow didn’t know whether he was counting beers or sheep.” By 1954, Brading’s had opened additional plants in Montreal, Hamilton and Windsor. Two years later, Canadian Breweries Ltd. moved the Ottawa operation to Toronto and hoisted the O’Keefe banner atop the plant. In the peak years that followed, the brewery reportedly shipped as many as 168,000,000 bottles of beer a year across eastern and central Ontario and Quebec.

The last of billions of pints came off the line in 1969, when the business was consolidated in Toronto. The building was demolished in the 1970s and replaced with the Tompkins Housing Co-Operative and the Walnut Court townhouse development The warehouse property was expropriated by the National Capital Commission in 1962 – the brewery continued using the building and demolished in 1983 over the protests of heritage advocates. Fragments of the foundation and sections of concrete floor remain. A few years ago, when the city was installing a high-pressure transmission water main along the north side of Albert, Bruce Ballantyne and other Bytown Railway Society members went to watch for any traces of the former train yard to surface.

As the excavation project neared of the old brewers’ warehouse site along Albert, “we looked down in the trench they had created and saw the tunnel opening, which was being walled up with concrete,” Ballantyne told me. “No doubt this was the tunnel from the brewery to the warehouse and they were just plugging the entrance rather than filling in the tunnel under the street. There was no sign of any track but that may have been removed before the buildings were torn down.” Meanwhile, officials with the City of Ottawa’s communications office told me there was nothing in municipal records about any tunnel, much less a lost train.

Then I came across a tattered 1949 underground engineering diagram for that stretch of Albert, which is nicknamed “Spaghetti Junction” for the tangle of old water and sewer pipes snaking beneath. The “Brading’s Brewery Tunnel” is clearly marked, a straight line traversing about 20 metres across then-Wellington, from the brewery on the south side to the warehouse on the north. A cross-section diagram shows the passage is about 7.5 metres deep and winds under two water mains and over one sewer line, giving a contorted, elbow shape and a dubious grade for a short-track rail line. My search was running out steam. Finally, one man, a municipal worker, sat down and told me his tale about a second brewery tunnel. One day around 1988, water pressure dropped in the area and the man and other workers later found a water main near a fire hydrant on the north side of Albert, about 80 metres east of the former brewery and about 120 metres east of the Brading’s tunnel. Instead of gushing water, though, there was a small, mysterious sinkhole. The worker returned alone later that day and rappelled about 10 metres down into the strange cavity. When his feet touched the ground, he said he found himself an old rail tunnel.

The passage was about two metres high, with what appeared to be rough limestone walls. Dusty old bottles and cases of beer littered the floor. With a flashlight, he saw the tunnel stretched east and west into the darkness and was big enough that it had consumed the torrent of water from the broken main for 16 hours with no sign of accumulation. Then, he spotted the train. It was about four metres to the west and small, similar to a mine train: an electric-powered engine hitched to a few stack cars, all on narrow-gauge track. “It was like a city tram (with) little cars, about 14 feet long,” he said, on condition of anonymity because some work rules were not followed. “I didn’t really get a chance to go exploring,” he added with regret, explaining how he made a quick exit after just a couple of minutes when other workers unexpectedly arrived at street level.

Based on his account, the tunnel is thought to travel west from the former Broad Street and approximately underneath the east-west bike path running just north of Albert Street. That would have put it directly under the brewers’ warehouse in the Brading days. Presumably, it meets the original passage leading into the brewery. The water main was repaired and the sinkhole filled with enough concrete and rocks to seal the immediate void, but not the rest of the underground passage. Brading’s iron pony, it seems, still sits on its rusting track, entombed in a time-tunnel into Ottawa’s past. Colin Churcher, an Ottawa railway historian and retired Transport Canada director-general who authored The Railway Safety Act, believes someone should recover the mysterious relic. “If it is there, it should get rescued and put in a museum or put on display somewhere because it is priceless,” he said. “It’s not generally recognized how prominent railways were in industrial development in the past. “This something that really should be brought to the attention of someone who can do something about it.”

Sorry Linda, but Henry Brading’s Union Brewery was far from Bytown/Ottawa’s first brewery. Sterling’s Brewery (from which the name Sterling’s wharf derived) was as old as Lower Town, and Rochester’s Victoria Brewer was established in 1829. From the Mitchell & Co. 1864-5 directory:

Photo from the Carleton Place and Beckwith Museum Instagram Page

Alan Lewis from Bytown or Bust added this information about the beer bottle from the Mississippi Hotel in Carleton Place.

This beer, Bradings, was brewed in an old brewery near the  downtown of Ottawa. After WWII, most of the beer sold in Ottawa was brewed by Brading’s. I remember seeing many of these bottles when I was young. Brading’s must have been swallowed up by one of the large breweries, maybe Molson’s or Labatt’s. For Chaudiere Falls / Lebreton Flats history see www.bytown.net/chaudiere.htm. … Allan Lewis- Bytown or Bust

Saturday Night. Ottawa House in Hull from way back in the day.

Not sure if it was as notorious then as it later became, but it sure has a huge Brading’s sign on the top!

During Prohibition in Ontario (1919-1927), the Bradings Brewery on Wellington Street could not sell beer in Ottawa … but they could sell in Quebec. I suspect the picture is from this era due, when many deliveries were still made by horse and wagon. 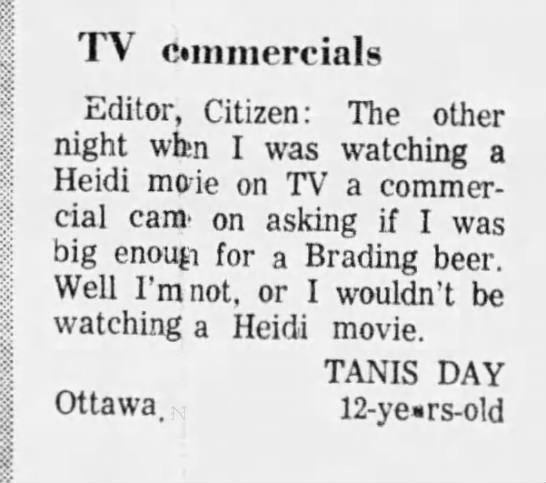 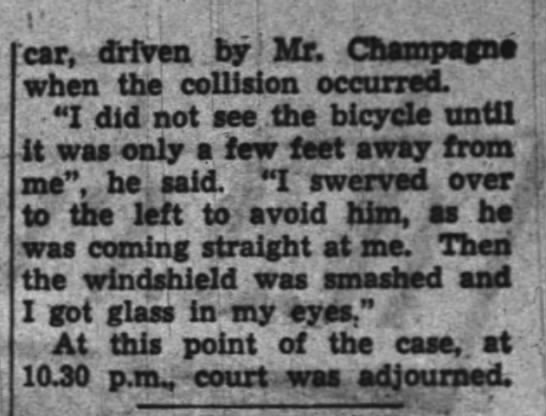