McLaren’s Depot Hugh Falls, Ferguson Falls, Innisville, Carleton Place, Almonte all had their bloody tales to tell. The Valley’s timber masons had ongoing feuds for mastery of the Mississippi watershed. Far removed from the battlefield, the Caldwells and McLarens themselves lived the life of the gentry,  at the former at Clyde Hall in Lanark and the latter at Nevis Cottage in Perth.

Senator Peter McLaren lived the life of a gentleman at Nevis just across the tracks on Drummond Street in Perth. With its walls full of classic art and rooms filled with the finest furniture.

In later years after the death of his unwed daughter Kathleen, the prestigious auction house of Ward-Price in Toronto were brought in and sold at extremely high prices. Her provisions had been taken care of along with the 600 acres the Senator had acquired at the northwest corner of town. The matter of his estate however developed into a total mess and was in litigation for years. 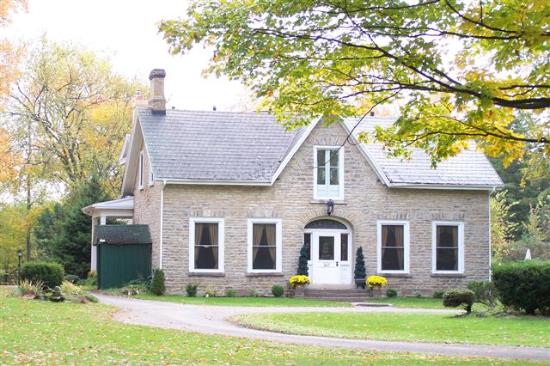 Built around 1842 by Reverend Michael Harris. Also the home to Senator Peter McLaren.

Mr. Charles C. Alan the well known Carleton Place shoemaker had part of his left thumb shot off while hunting partridge last Friday.The fault was all his own and he knew it was loaded too.