I have written about the Almonte one– and thanks to Joann  and Ken I now have one of the parade in front of the town hall in Carleton Place.

Joann Voyce– I got this photo from a classmate of mine. George Doucette is the gent on the left. Several class mates in this pic from the 1950’s.

Ken Godfrey However, even though it well may be 1949, I’m not sure that it was a Homecoming Event, rather my recollection is that it was a “Peanut Day” promotion by the Optimist Club (in conjunction with Planters Peanuts), as a fundraiser for their work with the boys of Carleton Place as my Dad was President of the club, about that time.

Tim Findlay –.The first Old Home Week/Carleton Place Anniversary I experienced was 1949 and a parade down Main St., with a float featuring Mr. Peanut. Pretty impressive. I was watching them from in front of the Esso station where we used to lean our bikes when we’d go to the Roxy Theatre. Imagine: we could do that and they’d be still there when we came back.
Ray Paquette To help you identify the “Queen”, her last name was McNeely and she lived with her sister on a farm on the south side of the Lake Avenue extension, across from the Arklan farm, in a brick farmhouse just past the old brickyard….
If I’m not mistaken, this event, including the “Peanut Queen” was the culmination of a fund raising campaign organized by the Carleton Place Optimist Club.

Wendy LeBlanc— I can clearly see in my mind’s eye Mr. Peanut at the corner of High and Bridge Streets by Gordon’s Store. Not sure of the year but definitely in the ’50s. We kids were thrilled to bits, but I now wonder how we knew about Mr. Peanut as none of us except Peggi Mace and Eddy Aiston had a TV until the ’60s.

Linda Gallipeau-Johnston– Wendy I remember Mr. Peanut standing in the doorway of the store next to the Blossom Shop one day and there was a red double decker bus giving bus rides. Apparently we missed the ride and it was such a big disappointment. Definitely in the 50’s – wasn’t that old. I can remember having a plastic small version of Mr. Peanut and I think it was at one time full of peanuts. I seem to remember different colors of plastic.

Joann Voyce— I remember the parade with Mr Peanut on a float going up High Street. I might even have a picture of the float going past our house, I will look for it

Norma Ford-– I remember that as well. I had a blue Mr Peanut, I have no idea what happened to it, I remember it was about 10″ tall.

Gail Sheen-MacDonald—Growing up in Ottawa, I have many memories of Mr. Peanut. He used to give the children small bags of nuts. Now he would be arrested!

I remember one year, once upon a time, when my Dad brought Mr. Peanut to town for some parade.
He (had dressed?) came out the back door of the store & then proceeded about his duties – parade & entertaining wise. 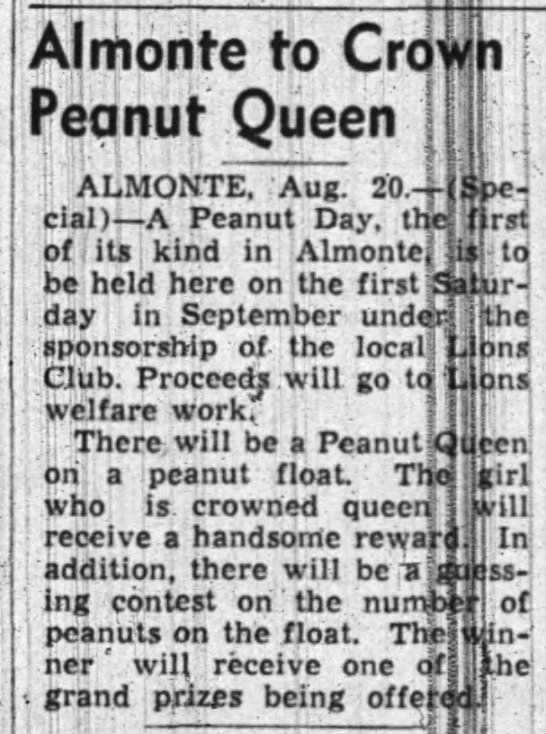 When Mr. Peanut was once King in Lanark County!

Yes Virginia, There is an APP for that Mouse Trap…