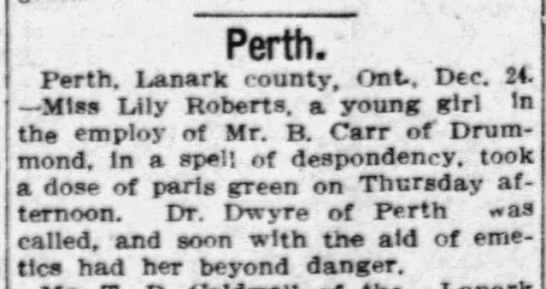 I find these articles that intrigue me and I have to find out more. Who was Lily Roberts? was merely 11 years old and she was the product of the British Home Children. She had been born in England and had been in the employ of Mr. Carr of Drummond. As with the other Bernardo children life was difficult where they were placed and many tried to commit suicide.

Paris Green was one of the most fashionable colors of the 19th century, a vivid blue-green that was used in many household paints, wallpapers, and fabrics. It was also highly toxic, being made with arsenic. (Some think that Napoleon may have been killed by the poisonous vapors emitted from the Paris Green wallpaper in his St. Helena home.) Widely available in hardware stores, it was also used as an insecticide and rat poison.

Paris Green also provided the means for a young Brooklyn girl to take her life in 1882. The New York Times told the tale under the headline “A Strange Suicide”: Louisa Cruikshank, aged just 18, and living “surrounded with every luxury” in her family home on Pacific Street, “frequently expressed a wish to die,” according to her mother’s later testimony. One February morning while walking with her sister to the Brooklyn Public Library, Louisa slipped into a hardware shop and bought some of the popular paint.

The next day, Louisa was playing a waltz on the piano when she fell suddenly ill. Her last words were chillingly calm; “Mama I may as well tell you. I have taken Paris Green. I have done what I said I would do.”

When 57-year-old Harriet Dillon passed away, her cause of death was recorded as “exhaustion and mental alienation.” During the Victorian era, mental anguish, melancholia, and exhaustion were terms sometimes used to describe what we now might call mental illness. Doctors who specialized in the study of mental pathology were often called “alienists,” studying those who were deemed “alienated from society. Or for others, it was a life they had never chosen.

As much as I searched I could not find out what happened to this poor wee child. 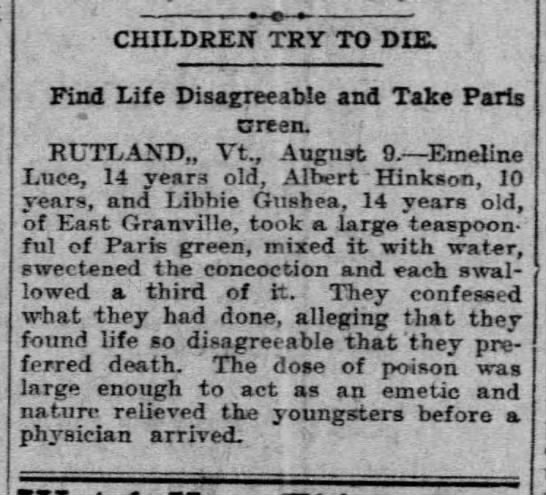 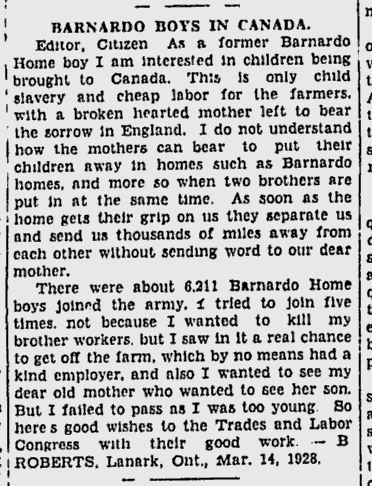 A letter to the editor of the Ottawa Citizen March 16 1928
B. Roberts Barnardo boy writes from Lanark, Ontario.  British Home Children in Canada

For the Love of Paris Green –Another Local Murdoch Mystery?

The Strange Disappearance of Bertha Sumner of Carleton Place

A Local Handmaids Tale? What Happened ?

Killed by Lightening -or Death by Bear Devouring