Telegram boys became popular after the Post Office took over control of inland telegraphs from the railways and private telegraph companies. Many of the boys employed by these services to deliver telegrams transferred to the Post Office.

In the early 1900s 10 messenger boys were asked by the local press whether they liked to deliver messages to men or to women. Eight replied without hesitation that they would rather deliver messages to men. One boy said that he would rather take envelopes to women, and another boy said that he had been a messenger only six days and had no choice and did not know a thing about it.

The consensus of opinion is that a man pays more tips in a week than a woman does in a month. It’s this way, said one local lad.:

“The man is the person that has the money. I like to carry messages to brokers, to horsemen, to some lawyers, and to those who are called spenders. It means a tip almost every time. I want more than my little two cents for the message I carry. I know as well as you do that I’m not entitled to more, but look at it this way. Suppose you are sitting in your office expecting a telegram. Along I come with the telegram. You read it and sign the book. The message I can see by your face means money or good for you, and it’s a good bet that before I get out of the office that you’ve forced me to take a tip.”

With women it seemed that it was different They seem to think that when they have paid charges on a telegram or have signed the book they have gone as far as they ought to be expected to. And often they haven’t got the change handy.

“The men for me every time,” said another. “That’s what almost any boy in the service will tell you. The women might give you a tip if they had the change at their elbow, but the man always has change in his pocket, and, thank goodness, we get our share”.

One messenger would have handled about twelve telegrams a day, both pick-ups and deliveries, receiving a piece wage of 2 cents for every call—barely enough money to cover his weekly bicycle and uniform rental fees, let alone his meal, maintenance, and mending costs. With the telegraph company hiring him out for other odd service jobs that paid by the hour (or the minute), his overall wage might come to a little over U.S.$2 a week—almost exactly what he would have been making at the same occupation in the same city a quarter-century before.

In contrast, an adult telegraph operator would have earned from $10 to $15 a week during the same time period, and a telegraph office clerk might have made between $5 and $10 a week.

Harvey Asselstine attended the Ontario College of Pharmacy in 1929. In 1944, he
returned to Carleton Place and bought the drugstore at the corner of Bridge and
Franklin, from W.J. Hughes who operated it for 38 years. Betty Findlay and Mary Cook both worked at Assestine’s Pharmacy.  In the rear of Asselstine’s drug store the CPR Telegraph operated during the 1950s. Asselstine expanded his drug store and bought out Hughes Grocery. In 2006 the Athen’s Corners Restaurant  was located there.

Harvey Boal, son of William Boal (or Boale) ( mother Mary Jane Stanley of Almonte was held responsible for the train accident in Hull. The loss of life and injuries could never be minimized but, had Harvey been habitually careless or inattentive the citizens of Almonte would have understood, but he wasn’t.

In 1915 he had completed a telegraphy course with Mr. W. S. MacDowell and he was noted as being above average in ability. The rapidity in which he achieved promotions from Almonte to the CPR head office and then  sent out west was incredible for someone who was barely 21. He had not been married very long, and did not drink and attended church regularly. He was taking classes so he could rise to a position of  divisional superintendent rather than pound a key.

By 1812, Burritts Rapids had become a bustling hamlet. At the peak of its prosperity, it had telegraphic and daily mail, 2 general stores, a bakery, a millinery shop, 2 shoe shops, a tin and stove store, a grist mill, a woolen mill, a tannery, 3 blacksmith shops, 3 wagon shops, a cabinet shop, 2 churches, 2 schools, 2 hotels, a bank and an Orange Lodge.

Frank Hogan of Almonte looked up as Louis Peterson opened the door of what he read was the Waiting room, and walked in. As he finished taking down the text off a telegram, Frank set down his headset and turned to the stranger.

Ray Paquette The young man appears to be dressed in an Army Cadet uniform. The store he is in front of was Bowland’s Grocery (Carleton Place) at the time the maple tree was growing out of the side walk. I walked by on my way to and from Central School 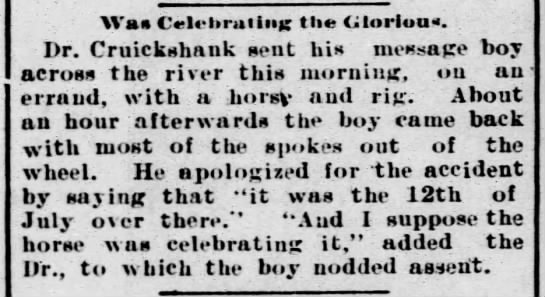 What Happens When Newspapers Finally Die and the Internet Reaches Capacity?