Mr. William Tippins, father of Frank, George and Matt Tippins the well known musicians, lived in Perth between 1883 and 1899 and worked in the CP.R. car shops. Mr. Tippins was an expert ear builder over in Herefordshire. England. But in 1883 finding things “a bit crowded in England”, he moved to Canada with his family. When he arrived in Montreal be did not have any difficulty finding a job.

The day after his arrival he was shipped with his family to Perth, to the then new C.P R. car shops. Perth was then a small place, and pretty much a Scotch settlement. The town had given the CPR a long exemption from taxation on its 30 acres of land. There were about 70 men in the CPR shop then. Mr. Tippins said that most of the carpenters were from the surrounding villages. Quite a few of them did not live in Perth, but drove to and from their work in buggies. The foreman of the shops was an old country Englishman and an expert car builder.

CPR car shops was situated at the foot of Herriott Street and during its heyday employed over 300 Perth and area residents. The building, which was prone to fire, burned in 1904. Railway cars and other wooden rolling stock were manufactured at this plant. Perth Remembered

When Mr. Tippins moved to Ottawa in 1899, he worked first at the Canada Atlantic railway shops and had some interesting treasures. The first was a large bible (large type) published in two volume which was printed in the year 1784. The second was a pocket edition of a number of Shakespeare’s plays, which were printed in the year 1743. The third was an old mahogany tray which was 140 years old in the 1920s.

He also owned a curiosity, the age of which is not known, but which has been in the family for at least two hundred years. It was in the form of a porcelain beer mug at the bottom of which as part of the mug had a porcelain frog, which when the beer is consumed, looks up into the face of the drinker. According to Mr. Tippins the mug was invented as a means of scaring heavy drinkers into temperance ways. It is probable that there is not another mug of the sort in the Ottawa district. 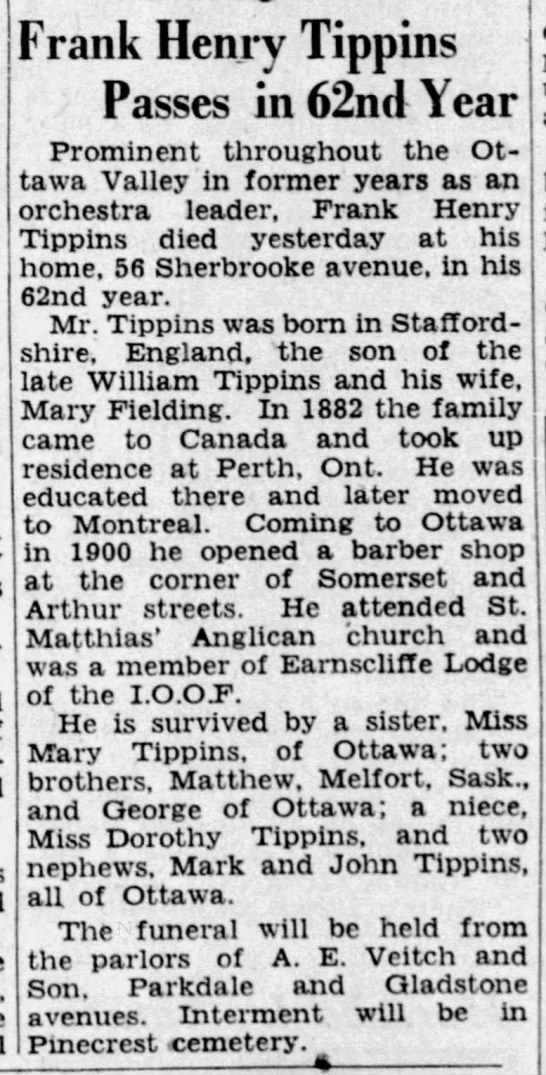