In Merrickville in the late 1800s in the old general the old residents used to gather In Miskelly’s general store to hear the news of the day and to swap stories. Possibly Mr. Miskelly’s generous sized biscuit barrels were an attraction.

A funny story is told in connection with these nightly gatherings that one night seven or eight old lads were sitting around the store when the door opened and another old citizen named Van Camp came in and approached the other old citizens sitting around.  One elderly man looked up and saw the newcomer. He coughed to attract attention to Citizen Van Camp, and then remarked in a loud tone,

Mr. Van Camp halted in his approach, thumped his cane to also attract attention and in a still louder tone of voice said, (staring hard at the first speaker)

“And the ass (Balaam’s) opened Its mouth and spake.”

At once there was roar of laughter from all parts of the store. For the next five minutes the man at whom the retort was directed was the victim of pitiless laughter. Unable to stand it, he got up and went home. This incident was the subject of talk in Merrickviile for long time.

-Mr. Miskelly is our Reeve.  There are certain marks by which he might be known, but as points of character are most potent we will refer only to them.  He is the only tinsmith in the place and he has not a record of ever having unduly taken advantage of the situation.  Indeed he does more jobs for nothing and sells goods cheaper than in many places where opposition is strong.  His urbanity and honesty place him in the position of door-keeper at all charity concerts.  He is honoured by his fellow citizens, loved by the ladies and respected by all who come in contact with him.  His success is ensured. 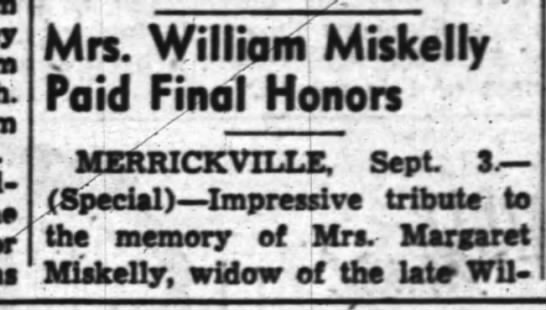 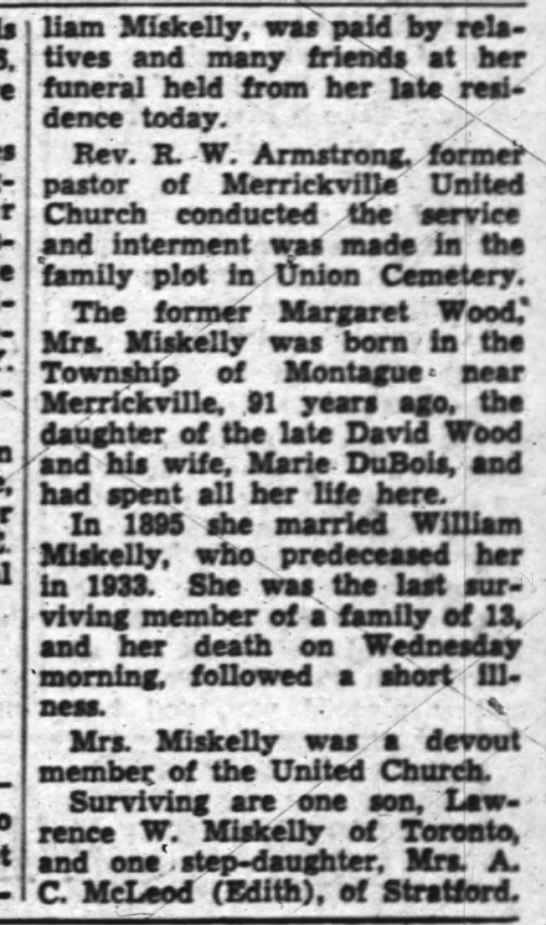