In November of 1937 a citizen of Almonte lost $990 to his dismay.  He  knew he had the roll when he went to Arnprior to transact some business, but didn’t spend any of it, but when he returned home he found his pocket was about as bare as Mother Hubbard s cupboard.

Most men would have been patting that particular pocket all the way home to make sure the money was there, but in the nonchalant manner of many Almonters this man never thought about it. In fact, he performed the evening chores around his house and it was only before retiring that he discovered to his utter dismay that the money had disappeared as completely as do the mists on a May morning over the Mississippi.

The man departed for Arnprior and had the local Chief of Police named Rodgers frantically pursuing the practices of Sherlock Holmes. More inquisitive noses poked into more cracks and crevices than were thought to exist.  On Thursday  it was reported that a woman had found the roll of money, less $100.

It was said that she was a lady whose modesty prevented her name being mentioned. Miraculously while she was driving into Pakenham from Almonte late in the evening and she spied a green roll fluttering in the roadside breeze.

Pakenham is as thoroughly honest as Lancaster is Scottish and the lady lost no time in getting the money to the bank. The banker promptly put the money into the vault and when the owner discovered his luck the lady got $50 for her honesty. The remaining $100 bill, thought by the sleuths and board of strategy is to have gone with the wind, is probably still snuggling somewhere on a barbed wire fence.

Anyway, the Almonter is $840 ahead of what he figured when he retired last night, and if there is any luck and a little more Pakenham honest lurking around he has a fair chance of getting that other $100 the fly-leaf of the roll.

Rose Mary Sarsfield added- Hi Linda I just read your story on the case of the missing $900. I wanted to let you know that Margie Argue has also passed away, as well as her brother. 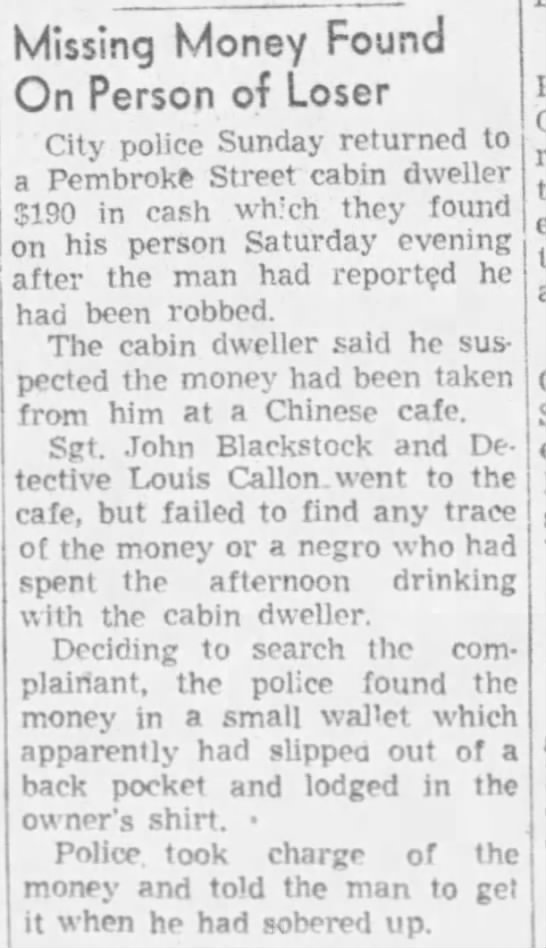