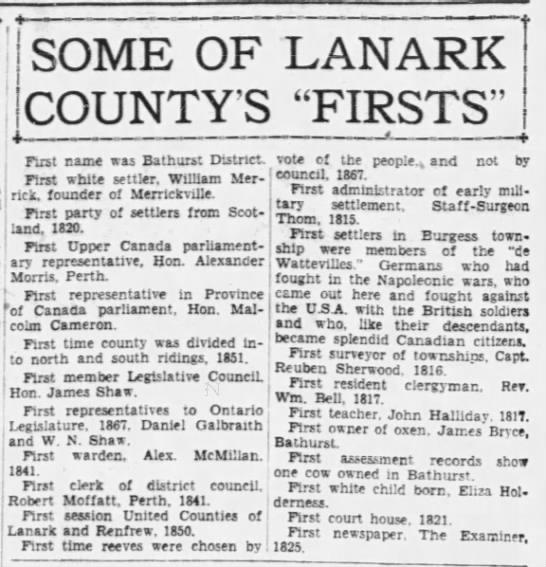 William Merrick-Thomas Smyth was a United Empire Loyalist. For his help in the American Revolution, a grateful British government granted him 400 acres of land that became the townsite of Smiths Falls. Smyth was the first to realize the area’s industrial potential. He set up a sawmill with his sons and son-in-law, William Merrick, founder of Merrickville. One family, two towns. Not bad.

From The Lanark County Genealogical Society–https://lanarkgenealogy.com/

The farms along the Christy Lake road (3rd con. Bathurst), 1817-1818, were taken up principally by the retired soldiers of the de Watteville and deMeuron Regiments — Swiss, Belgians, Germans, Poles and Italians, at first conscripts in Napoleon Bonaparte’s army, gathered from these various nationalities, and compelled to serve in his campaigns — and who afterwards, when taken prisoners by the British, volunteered to serve for our empire in the war of 1812-1815 against the United States. At the peace which followed, they were given grants of land by the Crown of farm lands in Bathurst, Burgess and Drummond.

Reuben Sherwood- First Surveyor
Thomas Sherwood, the first actual settler in the United Counties of Leeds and Grenville, located on lot No. 1, in the first concession of Elizabethtown, in June, 1784.  At the commencement of the Revolutionary War he remained loyal to the British Crown, and escaping to St. John’s, Lower Canada, via Lake Champlain, was employed in the Secret Service, going into the States and enlisting men to serve His Majesty King George III. His two brothers entered the Continental Ar­my. Read the rest here..

When the Scotch Colony first located, most of them lived in tents or bark huts during the
summer and until the cold weather forced them to build log cabins. The only yoke of oxen in the settlement for quite a length of time belonged to James Bryce, lot 12, concession 1, Bathurst, and most of the supplies except those sent in by the government for rations, etc. were “backed” in by the settlers from the nearest settlements, which were twenty miles distant towards the St. Lawrence.

Some idea of the resources of the settlers may be gathered from the fact that the first
assessment showed there was but one cow in the township of Bathurst in 1817. This was the first year of any kind of township organization in the settlement and Bathurst was the first in which town meetings were ever held. Samuel Purdy and John Ferguson were the assessors in 1817.

The teacher, John Halliday, came in 1815 with the settlers, and the clergyman, The Reverend Bell, came in June, 1817. The first religious service he conducted was the first ever in this locality.

What Came First in Lanark County? The Chicken Or the Egg?

*What Happened When the Paper Boy Never got Paid in Perth