Photo–No information is known about this photo other than these men were on Dalhousie Lake, Lanark County.–Can you provide names, corrections or other information?
Please email Charlie Dobie.

You’ve read of adventures on the high seas, but they appeal no more to the imagination than some of the thrill-packed yarns told by old-time lumberjacks concerning the turbulence and adventures on the log jam on the Mississippi river, of William McElroy, one of Ottawa-oldest citizens.

It happened about the year 1870 on Boshen Creek, near the head of Kippewa Lake and the central figure in the drama was a man by the name of Paquette. an off-time river driver. He and the foreman cf the gang, Bob Connolly, had volunteered to go to the top of a huge log jam and snub a ‘dog’ into one of the uppermost logs. This proceeding, as all veteran lumberjacks will tell you is dangerous, because there is always the chance of the jam giving way before they have time to get off it. That is exactly what happened in this case.

Paquette was on the top of the jam and Connolly had started to pick his way down, when a warning shout went up from below. Both men heard the shout and hastened in their effort to jump clear before it was too late. Connolly was successful in reaching the bottom, but Paquette missed his footing and fell headlong into an opening in the moving logs. He disappeared completely from sight.

At that moment there was a deafening sound, like the roll of thunder as the great jam gave way completely. Thousand of logs went hurtling downstream, and not a man on shore believed that Paquette had one chance in a million. Every last man of them bared his head and knelt in prayer.

When the last log had thundered its way downstream the men got to their feet and looked toward the spot where Paquette had disappeared. To their utter amazement, a drenched but smiling figure arose from what all believed to be his watery grave, waved a greeting, and made his way to shore unassisted. He had rested on the bottom of the stream between two huge boulders, while the logs passed over him Strange to say, Paquette suffered no after effects from his trying experience. 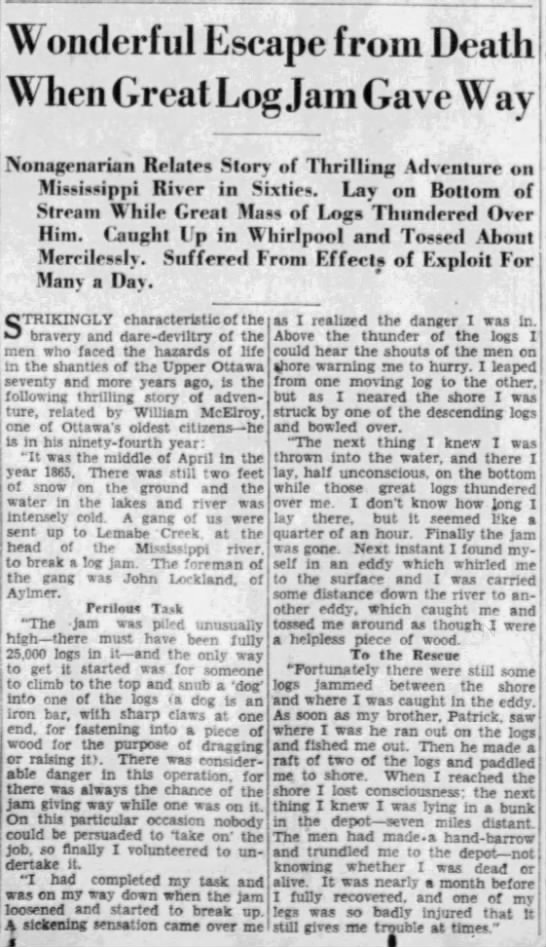