Tammy Marion I live in the country and rarely do I see Milkweed anymore -if at all.Not like I did when I was young or a kid. Our endangered Monarch butterflies food source 😦

Fran Cooper I remember collecting milkweed at S.S. #6 & 7 Ramsay and I won a prize of a navy blue sweater with flowers embroidered on it for collecting the most bags of milkweed at my school.

What did they do with the milkweed?

Fay Tucker Linda Seccaspinaapparently they used the filaments inside the milkweed pod for the stuffing in the vests.

Rose Mary Sarsfield It was used as stuffing for life preservers.

This October 1944 scene shows Six Mile School students pointing upwards to some of the 109 sacks of milkweed pods they gathered for the war effort. The bags are hanging in a corn crib near the school so the pods could dry out. Teacher Louise Behrend (left) looks on proudly.

Inside milkweed’s rough seed pods is another wonderful surprise: The fluffy white floss, attached to milkweed’s flat brown seeds, could be used to stuff pillows, mattresses, and quilts, and was carried as tinder to start fires. During World War II, the regular material used to stuff life jackets was in short supply, so milkweed floss was called for as a substitute—it is about six times more buoyant than cork!

Once upon a time, milkweed was commonly used in a number of natural remedies:

At the start of the school year in September, 1944 school children joined the search for milkweed pods. Within two weeks, students at the School Street School had collected 40 bags towards the town’s goal of 250, enough to produce 20 life vests. 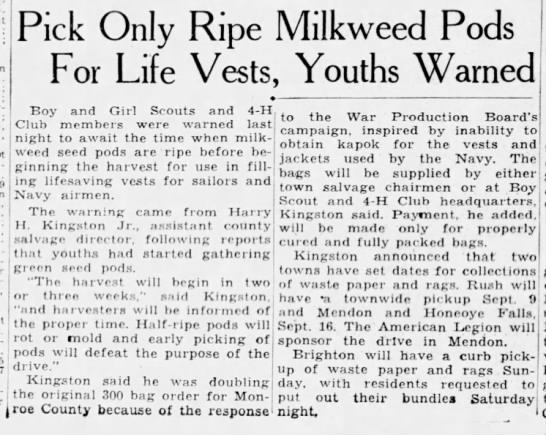