February is Black History month in Canada and last month I was asked  by a reader if I knew any information about local black family/woman that lived in Carleton Place in the 1920s.

I felt it was important to pay tribute and I began searching. The Carleton Place and Beckwith Heritage Museum had no information, but local historian Karen Prytula did some digging and found out there was one particular Ball family that lived in Carleton Place on Hawthorn Street in 1921.

Their names were Alcida, Ivonne, Maguerite, Annette and Leo and were listed as unemployed as were many in that time frame. Karen has done extensive research on slavery in the southern states and she noticed that the Ball family of Georgia/South Carolina were owners of huge plantations. When the Ball family slaves escaped to the north, or to the British forces, or were manumitted, or emancipated, a great many of them kept their former owners surname;  the name Ball.

The Ball family gave them land on which to farm after the American Civil War and had a great many of mulatto children who were given the Ball surname right at birth, even though they were still enslaved. They were treated extremely well; given an education, fed and clothed properly, although they were not allowed to inherit anything.

A great many black people alive today have white ancestry, i.e. have been able to trace their ancestry back to white males named Ball. Karen has come across many black families that were in Canada in the 1910s and 1920s, who can trace their ancestry back to the Ball family of the southern states. She has found them living in London and Toronto area.

The Ball family Karen found living in Carleton Place claim their “race/tribe” to be Quebec. There is no field on the 1921 Census for ‘race’ – however you will find that field on a Census from Georgia or South Carolina.  So, there is a chance this family could be black.

Karen said, “So anyways, ask your enquirer if the surname Ball rings a name. Maybe this will be the black family you and I were talking about.  In the meantime I’ll keep looking for other clues throughout the 1921 Census as time allows”.

Just one small change.  The 1921 Canadian Census does say ‘race/tribe’, but it does not say ‘colour’. U.S. Census, have, in the past, included a field that said ‘colour’. In Canada, we have not idea what colour the people are.
What scares me is that there were a lot of Bell’s in Carleton Place, and the transcriber might have made a transcription error because the Census is so hard to read. But it surely does look like Ball to me. But we cannot be sure.

I began this blog a few weeks ago and today, Feb 2, 2019 I had the chance to hear Perth historian Ron Shaw speak about the first black family in Perth. This is an excerpt from The Best Known Men in Town by Mr. Shaw. that would add to this story with new information about the first black person in Carleton Place.

Gilbert’s son, George Henry, did not take over the Perth shop. George
Jr. had, presumably, been apprenticing under his father, because within a few years he opened his own barber shop at Carleton Place, but in September 1874 he was just approaching his sixteenth birthday and must have been considered too young and inexperienced to take on the family business.

George Henry (b.1858) opened a barber shop on Bridge Street in Carleton Place in about
1877. In 1880, he married Elizabeth Ann Hayden (1862-1946)62, of North Gower, and relocated to Almonte, where he worked as a barber and hairdresser for the remainder of his life. The 1881 census records George as ‘African’ but 10 years later his ‘racial origin’ is listed as ‘English’. With a Mulatto grandmother and father, and a White mother, he seems to have crossed the color line with the new century. He was the father of two sons and a daughter.George Henry died, aged 49 years, of diphtheria and meningitis, at Almonte in 1907. Read the rest of the Gilbert family story by Mr. Shaw here

Unlike the United States, Canada had no blatant laws banning interracial marriage. But while the stigma was more informal in this country, it could be just as terrifying. In 1926 the Ku Klux Klan- of Canada strongly organized in Smiths Falls was evidenced at a mammoth Klan demonstration there Sunday afternoon and night in McEwen‘s open field 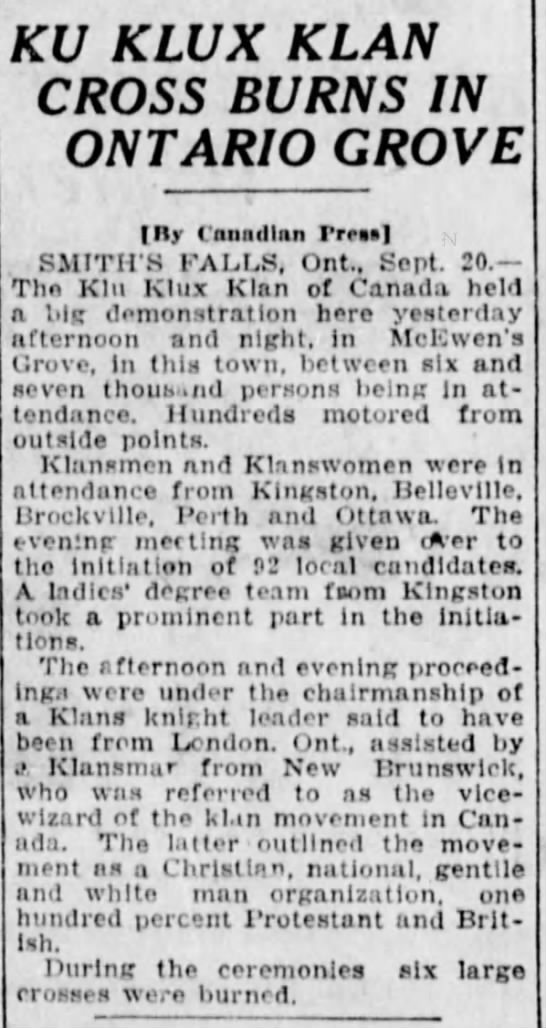 In 1927, Klansmen congregated in Moose Jaw, where they burned a 60-foot cross and lectured a large crowd on the risks of mixed-race marriage.

Three years later, on Feb. 28, 1930, some 75 Ku Klux Klan men dressed in white hoods and gowns marched into Oakville, Ont., and burned another massive wooden cross. They had arrived to intimidate Isabel Jones, a white woman, and her fiancé, Ira Junius Johnson, a man presumed to be black but later found to be of mixed Cherokee and white descent. The woman’s mother had summoned the KKK to separate them.

The Klansmen kidnapped Jones, 21, and dumped her off at the Salvation Army, where they would keep surveillance on her for days from a car parked outside. In front of the couple’s home, they burned a cross and threatened Johnson. During the invasion, the police chief recognized many of the Klansmen as prominent business owners from Hamilton as they plucked off their hoods to shake his hand.

It was only after several black Toronto lawyers pressured the Ontario government that four of the Klansmen were arrested for being “disguised by night,” a trivial charge related to burglary. Just one of the four men – a Hamilton chiropractor and father of five – was convicted and given a measly $50 fine. An appeals court eventually sentenced the Klansman to three months in prison. Undaunted, Jones and Johnson married one month after the ordeal.

By the way, there are over 8 million entries in the 1921 Census for Carleton Place – I find that a little hard to believe.  I have glanced at 200 entries so far. I have found a Chinese family, and a Syrian family.  No Jamaican’s or Africans, etc., yet.
Other surnames of slave owning families whose slaves took that surname upon being freed were Shadd (many spellings), Turner, Harleston. Karen Prytula

The first recorded black person to set foot on land now known as Canada was a free man named Mathieu de Costa. Travelling with navigator Samuel de Champlain, de Costa arrived in Nova Scotia some time between 1603 and 1608 as a translator for the French explorer Pierre Dugua, Sieur de Monts. 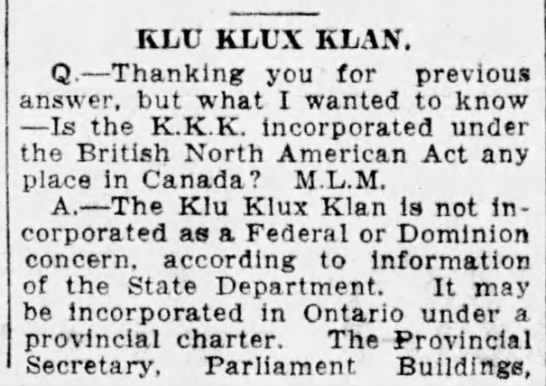 Here was the first white child in Carleton Place

Like a thunderbolt from a clear sky was the announcement of the death of Mr. Alfred Dulmage this morning at his home on High street, for few indeed knew of his illness. The day before Christmas he was feeling a trifle out of sorts, thought to be a slight *bilious attack. This was succeeded by an attack of *la grippe that later developed into pneumonia, and at 5 o’clock this morning the spark of life expired.

Mr. Dulmage was born at Appleton, being a son of the late Richard Dulmage, *his mother being a Morphy, the first white child that was born in this neighbourhood. He was 53 years of age. In his youth he was quite an athlete, and was well known among the young men of his day. December 29, 1896, he married Jennie Greene, daughter of the late M. A. Greene, who with one son Barnet who survives.

About eight years ago Mr. Dulmage disposed of his farm in Ramsay and moved to Carleton Place, purchased a property and made a comfortable home for himself on High street. He was a man of strict integrity, quiet and inostentatious in his disposition and highly respected b y all who knew him.

In politics he was a Conservative, in religion a Methodist, and a member of the official board of the church. His death, as it were in,the prime of life, is very deeply regretted. The funeral is ‘fixed for Thursday morning, to the eighth line Ramsay cemetery *(Auld Kirk).

The Day the Ku KIux Klan Came to Smiths Falls

Slavery — Not in My Backyard?

JOHN BAKER, THE LAST OF THOSE WHO HAD BEEN BORN IN SLAVERY IN CANADA

Down by The Mississippi River with The Jessops (Mrs. Jessop was a former slave owner)

Weird and Thrilling Concert in Carleton Place? The Jubilee Singers of Tennessee University